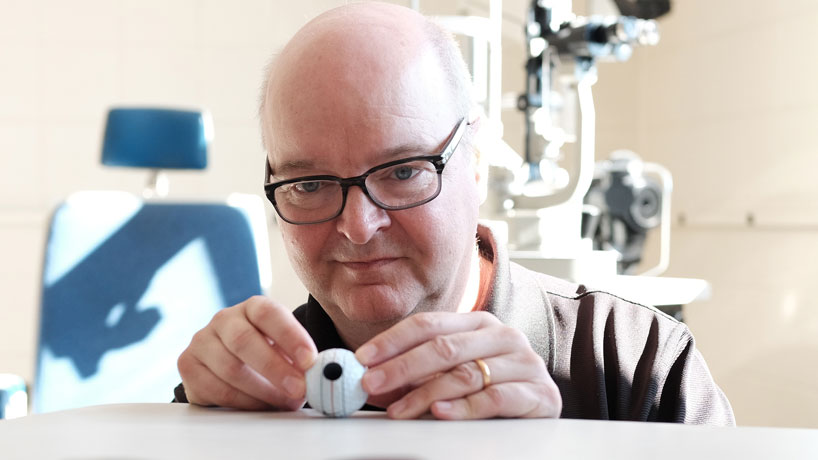 Carl Bassi doesn’t consider himself much of a golfer. But his research is providing validation to a new golf ball design that could knock strokes off the scores of amateurs and pros alike.

It started with a phone call out of the blue from Ray Barrett, a St. Louis corporate executive and inventor.

“He was asking around to see if there were people in the area who might be able to help him with his question,” recalls Bassi, associate professor of optometry at the University of Missouri–St. Louis.

That question: Could a series of three parallel lines on a golf ball help improve a golfer’s aim while putting? The answer is yes, Bassi found.

He led a team in constructing a 12-foot green using plywood, AstroTurf and a golf cup, and then testing volunteers’ aim using laser technology.

The test subjects – mostly members of Normandie Golf Course, the rest UMSL students – would line up putts from five feet and 10 feet from the cup, using both an unmarked ball and Barrett’s patented creation, the Triple Track ball. They would only aim; no contact with the ball was made.

“We did that for a very specific reason,” Bassi says. “They might just make a bad putt at the time.”

Using the laser to determine the golfers’ aim, Bassi found that on average, their aiming accuracy improved 11 to 12 percent with the Triple Track.

The ball features three lines – a unique middle line flanked by a pair of identical lines. The effect of the three lines mirrors that of a gun’s sights. Using multiple lines helps the eye better determine the correct path.

“Many professional, as well as recreational, golfers draw a line on their golf balls to assist them in aligning the ball with the hole,” he points out. “It seemed reasonable to consider a more professional alignment assist.”

The United States Golf Association has designated the Triple Track ball “Permitted under the Rules of Golf.” Barrett hopes to have the ball on the market by the end of the year.

Bassi’s team for the project included research technicians Michael Howe and Wayne Garver, and optometry students John Olson and Matt McCoy, who are both now alumni.

“I feel lucky to work with Michael and Wayne,” Bassi says. “They really are remarkable in terms of taking ideas and generating a physical, usable product or working together to come up with creative solutions to problems like the one that Ray Barrett posed with the golf ball.”

This story was originally published in the spring 2015 issue of UMSL Magazine.