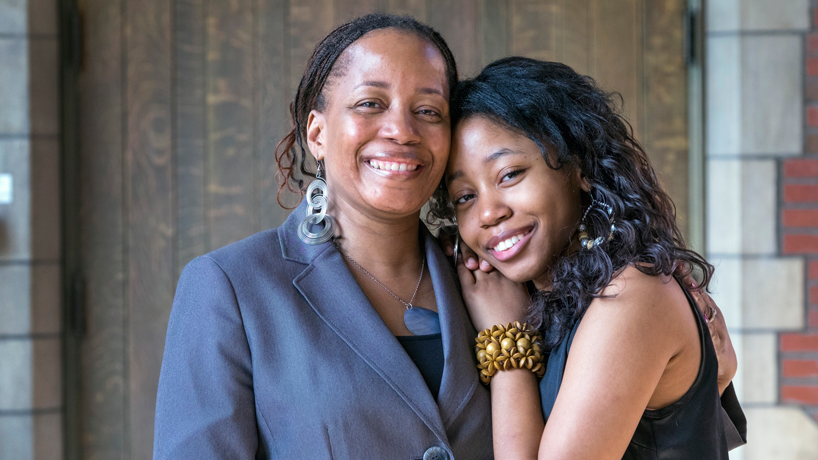 Kimberly Clinton (at left) nurtured her daughter’s ambitious spirit, and now Kalynn is entering her first year of college right alongside her mother, who has begun working toward a master’s degree in educational psychology. (Photo by August Jennewein)

University of Missouri-St. Louis alumna Kimberly Clinton believes the pursuit of education is a priceless opportunity — an opportunity her grandmother never had.

“My grandmother desired to go to school, but she didn’t get to go because her mother died at an early age, and she had nine other siblings to help her father raise,” said Clinton. “Even though she couldn’t go to school, she wanted all of her children and grandchildren to continue on with their education. And God blessed her and kept her.”

Kalynn Clinton, Kimberly Clinton’s daughter, is entering UMSL as a computer science major for her first year of college. She’s also been accepted into the Pierre Laclede Honors College, and although this is her freshman year, she is no stranger to the campus.

“From watching my mother complete her degree, to going through the Bridge Program, to working for that department over the summer, I’ve been a part of the UMSL community for the last eight years,” said Kalynn. “Starting college here feels really good. I looked at other colleges just to make sure I wasn’t selling myself short, but then I realized that UMSL offers a world-class education.”

Natissia Small, assistant dean of students and director of the Bridge Program, has witnessed Kalynn Clinton’s personal, professional and academic growth over the years. Besides her high GPA, college entrance exam score and leadership ability, Small has observed qualities Kalynn Clinton possesses that can’t always be taught — a sense of kindness and a sincere warmth. And Kimberly Clinton’s devotion to her daughter’s education and success also has not gone unnoticed.

“Mrs. Clinton demonstrated to me what I see in many parents that are committed to ensuring their child has a strong educational foundation: a willingness to make sacrifices and demonstrate through her actions a legacy for her children to follow,” said Small. “I am always excited to witness our Bridge Program students pursue higher education, and I find it just as gratifying to witness our Bridge Program parents, like Mrs. Clinton, pursue a college degree as well.”

Kalynn Clinton’s investment in academic success has paid dividends as she has earned four competitive scholarships, the Anheuser-Busch African American Scholarship, the Community Scholarship at Oak Hall, the Honors College Housing scholarship and the Express Scripts Bridge scholarship. With a good foundation under her feet, she intends to follow a bit of her father’s example and take the first steps toward building a fruitful business career.

“My father is an entrepreneur who owns a media company and taught me and my siblings entrepreneurship, so business has always been a huge part of my life. I plan to minor in business, with an emphasis in finance, so I can know more about handling money and to help other people with handling their money.”

Despite the Clintons’ familiarity with campus, the first weeks of college can still be exciting and overwhelming, and attending the New Student Orientation helped settle some nerves.

Miriam Roccia, assistant dean of students and director of campus life, was happy to help the mother and daughter navigate the new dynamics in this next phase of their education.

“Kimberly’s pride and excitement for Kalynn to start this journey was evident in every interaction we have had,” said Roccia. “Even though Kimberly ‘knows’ the campus, she was like many other parents throughout the summer orientation experience: anxious about the journey on which Kalynn is embarking.”

While a bit of anxiety is to be expected when seeing your daughter go off to college, Kimberly Clinton added that she knows her daughter will do well and pursue education with her great-grandmother’s wishes at heart.

“In our family we don’t believe we go to school to become something. We believe you go to school to enhance what is already there,” she said. “When you get that syllabus on that first day of class in college, you know no one is going to hold your hand every step of the way. You have to be your own advocate and make sure you’re getting the knowledge you desire to learn. As Kalynn goes into her first year of college, I’m confident that she will flourish and be able to assist others in taking charge of their education.”