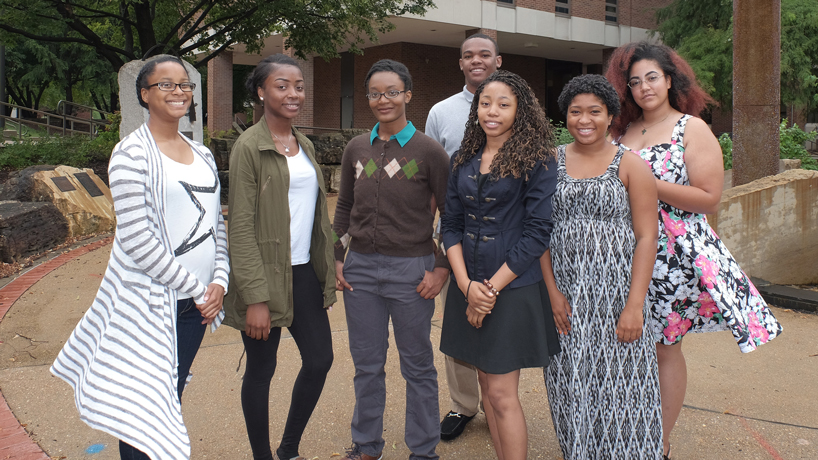 They may still be teenagers, but they’re also future engineers, medical professionals, scientists and anthropologists. Partway through their first semester of college at the University of Missouri–St. Louis, they are a determined group of incoming students benefitting from a major investment announced by Express Scripts last fall.

“Each of this year’s recipients represent the opportunities that are afforded to youth when we invest in their education and equip them with the necessary support services that ultimately lead to degree completion,” said Natissia Small, assistant dean of students and director of Bridge, UMSL’s flagship precollegiate program, of which the scholarship recipients are all graduates. “I am grateful that Express Scripts invested in Bridge so that we could continue the legacy of preparing students for their matriculation to college and becoming impactful adults in society.”

The seven UMSL freshmen are recipients of up to $15,000 per year going toward tuition, student fees, a laptop, textbooks and a professional mentor from the university’s corporate neighbor, whose $2.5 million commitment to UMSL aims to help local young people thrive. The support bolsters and expands the Bridge Program’s Saturday Academy, now annually benefitting 700 local high students in preparation for college.

And following the seven UMSL scholarships awarded this first year to Bridge participants, five more will be added per year through 2021 thanks to the Express Scripts partnership. The Fortune 500 company’s support paves a path forward for each of the well-deserving local students in the Bridge Program cohort.

“This scholarship means the absolute world to me as I start this journey,” said Staples, a biochemistry and biotechnology major who graduated from Hazelwood West High School in north St. Louis County. “Right now, it’s really just me and my dad. He has supported me and my family so well for so long, and I’d hate to put any more hardships on him. However, with this scholarship, a weight has been graciously lifted off of my shoulders.”

Staples’ mother, who passed away during her sophomore year of high school, was the person who first insisted that Staples become involved in the Bridge Program several years ago – and Staples is forever grateful.

“Her memory, as well as the standards she held me to, kept me pushing forward – and still does,” says the freshman. “She truly is the driving force in my life.”

Each of the seven members of the cohort credits the intensive precollegiate program with providing a firm foundation for their next steps.

“When I was in high school I didn’t always appreciate the Bridge Program – mostly because I didn’t enjoy getting up early on Saturday mornings or during the summer,” admits Ferguson, who is studying mechanical engineering. Dorsey, who is also pursuing engineering at UMSL, has a similar confession about his original involvement.

“My mom basically forced me to do it,” he says. “I wasn’t too happy about it initially, but after being a part of the program for a while, I realized how helpful it was. I learned so much.”

For Ferguson, who lives in north county but graduated from Maplewood-Richmond Heights High School, the scholarship news was a big relief.

“I don’t have to worry about the stress of student loans or expensive textbooks straight out of high school,” she explains. “It makes me appreciate this scholarship even more knowing that I won’t have expensive bills looming over my head in the future.”

Dorsey echoes his classmate, adding that he’s eager to make the most of the resources that have been invested in him.

“It gives me a lot of motivation to be efficient while I’m here,” says the Lutheran North High School graduate.

Clinton, who is majoring in computer science, has been reflecting on “those long nights of study” leading her to this point. Now, when she considers the amount of time and effort she put in and the sacrifices she had to make, she knows it was all worth it.

“I am so grateful for this scholarship, because it is allowing me to focus on my academics and become much more involved on campus,” she says. “Already it has provided me and my family with a greater sense of security in knowing that I will graduate debt-free. It means freedom, peace and a lot less stress.”

Larry, who grew up in University City and attended Hazelwood West High School alongside Staples, is diving into an anthropology major at UMSL.

“I’m very passionate about it – I love it,” says Larry, whose mother is a UMSL alumna. “Hopefully my studies will take me to grad school so I can get my doctorate. I’m hoping to study abroad in an Arabic country or maybe somewhere in Africa.”

A person of varied interests, Larry is a music lover, science and hiking fan, and a writer. And those interests have only deepened at UMSL – including while participating in the Bridge Program.

“What strikes me is the overall feeling that you’re not alone,” Larry says. “I’ve always felt so supported here, like the professors have a real interest in seeing me grow, develop, succeed. And not just the professors, but the other employees as well – and the students. I’m always in such a warm atmosphere, and I feel so at home here. It really is, in my opinion, the best thing about UMSL.”

Many of the Express Scripts cohort members already speak highly of their coursework in the Pierre Laclede Honors College. And they’re loving campus life at UMSL, too.

“I love the vibe, the people and the help that I receive,” says Fedrick, a 17-year-old biology major who aims to be a pediatrician. “I live on campus in Oak Hall, and because of my class workload I spend almost all of my nights in the peer mentor lab in Oak. I honestly don’t know what I would do without the lab or the people in it. They’re not only great tutors, but they have become my friends, and it makes that learning atmosphere so fun and comfortable.”

She got the Express Scripts scholarship news the same day she graduated from Hazelwood West High School this past spring, and she remembers being overwhelmed with gladness.

“All I could do was cry,” Fedrick says. “I realized then that UMSL had to be the school for me, just because there was someone there that believed in me that much.”

Ritenour High School graduate Foreman says she’s grateful not just for the elimination of financial stress thanks to the scholarship but also the ways in which the opportunity is molding her as a student and a human being.

“Being part of the cohort has offered me a lot of resources such as tutoring, mentoring and networking,” says Foreman, who is majoring in nursing and also describes herself as a food, movie and shopping fanatic. “It is helping me adjust to being a first-year college student and making the transition happen so much easier.

“I love the Office of Multicultural Student Services,” she adds. “They offer me so many resources and guidance, and I love the overall atmosphere of UMSL, too. It’s extremely inviting and engaging, and there are so many opportunities to get involved. I enjoy my weekly meetings with my MSS peer mentor Ayo Aruwajoye. She is a senior nursing major and has really given me good advice about college life and studies.”