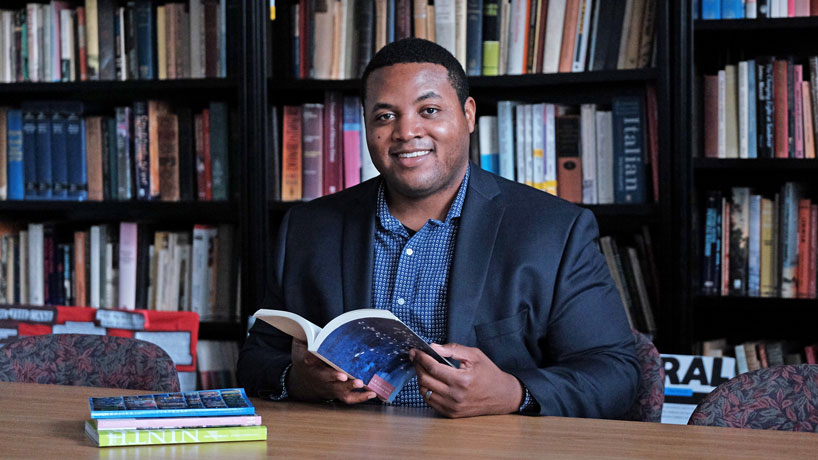 Ron Austin, MFA 2011, is one of 10 local artists to receive a $20,000 artist fellowship from the Regional Arts Commission. He’s working on a short story collection, “Avery Colt Is A Snake, A Thief, A Liar,” about growing up in north St. Louis and will use the money to fund an accompanying graphic novel. (Photos by August Jennewein)

When Ron Austin decided at 15 years old that he was going to be a writer, he was living with his family near North Grand and St. Louis Avenue, going to Kirkwood High School on the bussing program and reading Richard Wright for a philosophy class.

“‘Black Boy‘ was one of the first novels that I really related to,” Austin said. “Since it really affected me, I wanted to figure out why it did that and how I could do that for other people.”

For 17 years, Austin has pursued that goal, earning his MFA in creative writing from the University of Missouri–St. Louis and often “writing in the dark” – his phrase for working hard on writing with little to no recognition.

“I pursued writing for the sake of writing and understood the importance of keeping intentions pure,” he said. “When I read biographies of authors I admired, I noticed most of them spent years and years working on one project, and I realized there are a ton of talented  people, but patience, diligence and integrity make the difference. You have to study, practice and produce your best work before anything else.”

And now Austin’s work is beginning to gain recognition.

On Dec. 13 the Regional Arts Commission shined a light on the UMSL alumnus, who received a $20,000 artist fellowship from the organization to further his writing. He was one of 10 local artists to be funded out of the 212 applicants who practice a variety of disciplines including music, visual arts and theater. 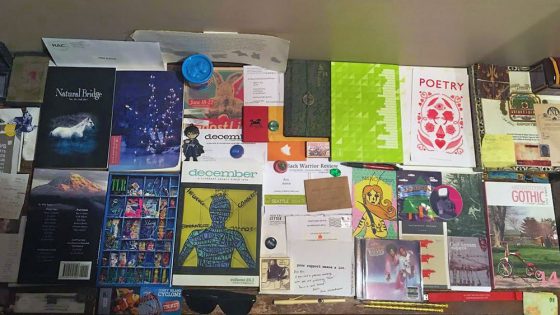 A collage of the journals featuring Ron Austin’s work, including some inspirational nicknacks he keeps at his desk

“It’s just really surreal and strange to finally have so much support and to have people honor and celebrate what you’ve done and what you’re progressing toward,” Austin said.

Austin’s current draft of his short story collection “Avery Colt Is A Snake, A Thief, A Liar” earned him the honor. The stories revolve around a loose persona based on Austin’s childhood in his north St. Louis neighborhood.

“It’s a rough part of town,” he said. “You find yourself, whatever it is you’re trying to do, whatever your goals are, running into some difficult experiences just because of the conditions that you’re in.”

Just a 10-minute drive from his old home is Saint Louis University, where Austin earned his bachelor’s degree in English.

“That’s a very short stretch,” he said. “There’s the Delmar Divide. And before I ever watched a documentary about it or read anything about it, it’s something that I sensed as I walked back and forth between my home and campus. You have SLU, where millions of dollars are spent on building this beautiful campus, and then you have Grand Center with a lot of good interesting stuff happening there, but once you cross Delmar and you start to walk towards my neighborhood, it’s a completely different story. You can kind of tell that something’s off there. You ask yourself a simple question: ‘Why is that part of town so developed and this part of town is struggling?’”

Writing about his experience helped Austin not only process his circumstance, but it also presented an opportunity to encourage and instill hope in those who may have walked in similar shoes. But Austin’s writing also aims to move a second audience.

“Sometimes my friends from SLU would give me a ride home, and I remember the way they would look at where I lived. I’d see the fear on their faces, and I knew then they wouldn’t want to give me a ride anymore,” he said. “And I just want people who don’t come from this environment to understand something more about it, to develop more empathy and compassion and just understand that you have a lot of really good, regular people who have the same aspirations and goals, but they were just born into something different. That doesn’t make their aspirations and their lives’ values any less than your own. Instead of looking away from these things and being afraid, maybe this is a way to start difficult conversations and connect.”

Austin said that honing and crafting his stories to capture these complexities came with much practice and guidance from English Professor Mary Troy and the MFA in Creative Writing program at UMSL.

“Mary sold me on the program, and she didn’t mince words,” Austin said. “She said, ‘If you come here you’ll become a better writer. What you could accomplish in 10 years, you’ll be able to accomplish in two or three here.’”

Austin said that once he was admitted, he found faculty to be warm, supportive and knowledgeable. After the first year and his first workshop, he started deconstructing his stories and writing more carefully to get closer to what he had previously envisioned.

“I learned just how much work goes into drafting,” he said. “But if you do that work it usually pays off.”

Troy is glad she and the MFA faculty welcomed Austin in 2008.

“Ron came to us with talent, as all our students do, but it was at the end of his second year that he discovered his truths, his stories, his angle and perspective,” she said. “He blossomed suddenly as our best students do.”

“I’m not surprised to see this good fortune coming Ron’s way,” English Professor John Dalton added. “He has a great imagination and a really rich and distinctive ability with language. Ron’s created his own unique storytelling voice. And most crucial of all, he doesn’t give up.  He keeps finding the time to write and to produce good work.”

“I keep thinking ­­John Dalton will get sick of me asking for career advice,” Austin said, “but he’s always happy to help me plan the next step.”

With a full slate of stories, Austin intends to use his fellowship money for an accompanying graphic novel.

“It’s fun, but it will also reach a wider audience,” he said. “I know that in a graphic medium, I can do different things and give the reader a different experience.”

Austin aims to team up with a local artist for the project. He’s also beginning work on a new novel that will serve as a counterpoint to the short story collection. He intends to focus it more on the community and the abandonment and decay of the neighborhood.

“One day you know so-and-so lived over there, and one day later that family’s gone, the house is dilapidated, and you go there a few months later and it’s just a field,” Austin explained. “You know that happens to houses, to businesses, to corner stores – they’re just gone. That in and of itself is a strange feeling. It’s disturbing to see the place where you grew up just disappear.”

His research on the phenomenon points to redlining, the effects of segregation, zoning decisions and a damaged economy, but he’s leaning towards more absurd explanations in the novel. He intends for it to be magical realism, a writing tradition he first began exploring with UMSL Professors Howard Schwartz and Glenn Irwin.

“The effect in and of itself is so strange,” he said. “Who’s to say the house didn’t evaporate? What if it disintegrated? What if a giant kicked it over, or a sinkhole opened? What if urban sprawl is a literal fungus, eating brick and metal? It’s such an overwhelming situation that you start to believe that the only thing that could fix it is a miracle.”

Or maybe some writing? Austin admits it certainly helps.

“Life can be turbulent,” he said. “You turn a blind corner, and it can be violent; it can be dark. But I think you have to overcome fear and honor that. You have to respect that fact, look at it squarely, be brave and face it before you can find the positivity out of it and the strength to move forward.”

Ron Austin serves as a senior editor for december magazine. His stories have been placed in Ninth Letter, Story Quarterly, Black Warrior Review, The Masters Review, Midwestern Gothic and other journals. You will also find his byline in UMSL Daily and UMSL Magazine, where he writes stories about campus and the UMSL community.