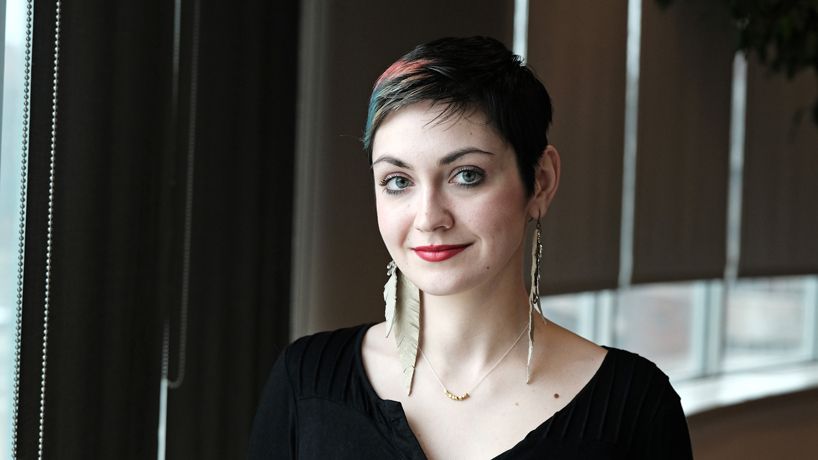 Bridget McDonald, who became enamored with poetry at age 6 and has been writing ever since, is a second-year graduate student in UMSL’s MFA in Creative Writing program. (Photos by August Jennewein)

Bridget McDonald has come a long way since she first started reading poetry in public. In fact, she used to experience quite a bit of stage fright. But that never stopped the University of Missouri­–St. Louis graduate student from stepping up to the microphone.

“In fifth grade, I read this really dark bummer of a poem in front of the entire school,” McDonald recalls with a laugh. “I think I had just finished ‘The Old Man and the Sea.’ And so it was this moody poem about being lost in the ocean, lost at sea, and I’m sure all these parents were wondering what was wrong with me and what horrible thing had happened to me.

“At the time I thought, ‘Well, if you’re going to be a poet, you have to be really serious about it. It has to be dark and depressing.’ That was what I thought it was.”

McDonald’s younger self wasn’t totally wrong, of course. Poetry can be many things – because words themselves can accomplish so many things. And the St. Louis native says that host of possibilities is the reason writing has been “a lifetime thing” for her.

It all began when she first opened a Shel Silverstein collection at age 6.

“I was just completely enamored with the book,” McDonald says. “As a little kid I think it was the rhyming and the musicality of poetry that charmed me. On a gut level that was really instinctively lovely to me – the discovery that language can be so appealing.”

Now it’s her focus more than ever before as she pursues an MFA in creative writing and also kicks off a year of service as UMSL’s official poet, so to speak. 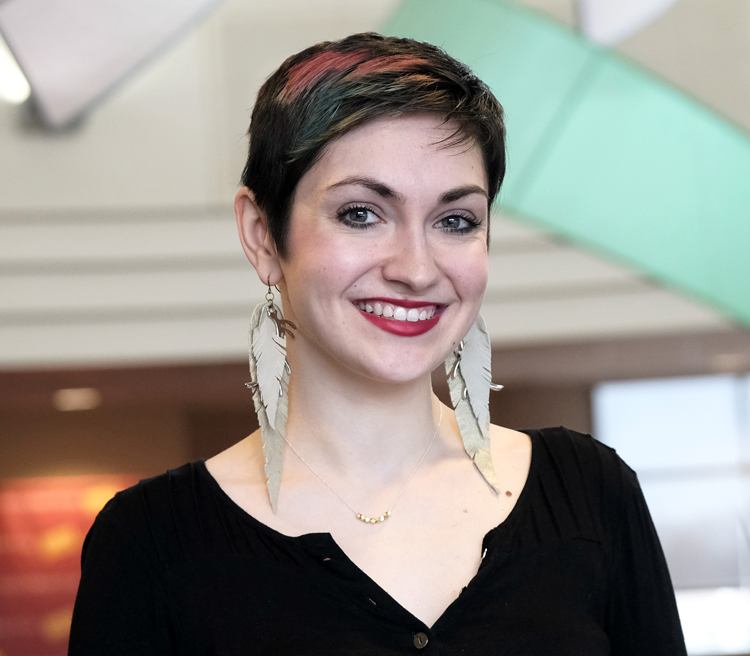 One of Bridget McDonald’s favorite forms of writing lately is persona poems, where her goal is to embody and empathize with another person – whether it be a historical figure, fictional character or ancestor.

In late December, McDonald learned she’d been selected as the university’s sixth poet laureate. Among other duties, the esteemed role involves reading poetry in public – and McDonald’s happy to say she’s actually “really excited to do readings” these days.

“I’ve gotten more comfortable with performing over the years, and I’ve started to really enjoy being in front of people. Teaching has definitely helped with that,” says McDonald, who has taught freshman composition at UMSL as a graduate assistant.

But as she looks toward this new role in 2017, she notes that the position is “kind of what you make it” in addition to composing and presenting poems at key university events.

“I think there’s room for creativity,” McDonald says. “Past poet laureates have done events at local schools with younger writers, so I’d be open to doing something like that. I’m also thinking about doing some community outreach – maybe start a book network where I give a book of poetry to 10 random people on the street and then ask them to give another book to someone else – something quirky like that that would be low cost but really fun.”

Meeting and networking with other poets and writers is another activity she anticipates making the most of – and something she’s already beginning to do thanks to UMSL’s MFA in Creative Writing program.

That strength of the program was part of what attracted her to it in the first place.

“The director of the program put me in touch with Victoria Walls, and she just answered with such compassion and interest and really made me feel like it was going to be a supportive place,” McDonald says. “And I’d heard that other programs can be sort of cutthroat, and that was something I wanted to avoid. Because what’s the point of competing with your tiny, little cohort? I mean, I think we have healthy competition, but our program has struck a really good balance between healthy competition and constructive criticism and the kind of support that you want.”

It’s an environment that’s given her confidence to keep exploring as she refines her voice as a writer. One of her favorite pursuits lately involves persona poems.

Sometimes it’s a fictional character, and other times it’s a historical figure or somebody drawn from current events, McDonald explains – but her main goal is to embody and empathize with them enough to write in their imagined voice.

Last semester she wrote a poem in the voice of the woman to whom Vincent Van Gogh gave his severed ear. Another recent draft took on the persona of Audrey Munson, who lived to be 104 years old and is considered to have been America’s first supermodel.

“She was a complicated lady, and she was the muse for a lot of the sculptures around New York, so there are images of her everywhere,” McDonald says. “And later in life she was institutionalized. So I used her as a way to write about body image, attention, the male gaze and the ways those things can be problematic.”

As she looks toward the next calendar year at UMSL, the support she’s received – plus the chance to serve as poet laureate – has her feeling both thrilled and grateful.

“I had hoped that that’s what I would find here, and I was not disappointed,” McDonald says. “I can’t say enough good things about this program.”