Ask an Expert: Anne Austin and the looted Coffin of Nedjemankh 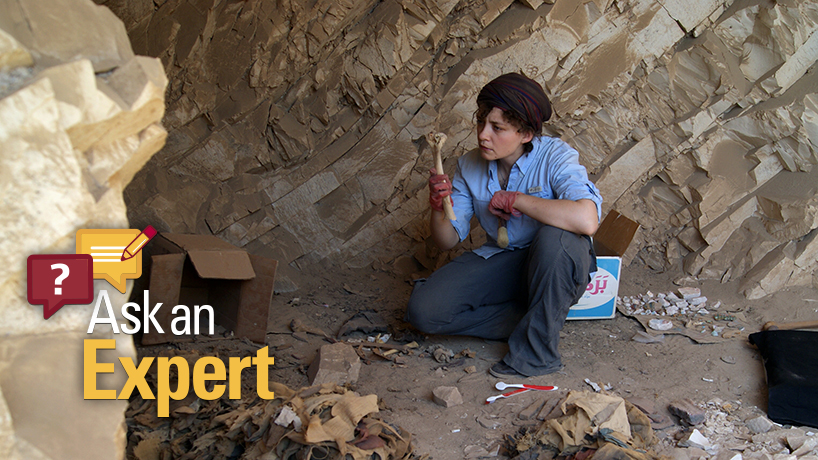 Featuring raised designs and entirely sheathed in gold, the Coffin of Nedjemankh was the crown jewel in the Metropolitan Museum of Art’s eponymously titled exhibition, which opened last July 20 and was slated to run until April 21. Acquired in 2017 from an art dealer in Paris, the coffin came with an ownership history establishing that it had been exported from Egypt in 1971, before a United Nations Educational, Scientific and Cultural Organization treaty protecting cultural property took effect in 1972.

The problem: the papers were fake.

Turns out the coffin had been looted from Egypt in 2011. On Feb. 15, the Met announced in a press release that it was relinquishing the coffin to the Manhattan District Attorney’s office for repatriation to Egypt.

Though the story sounds straight out of an “Indiana Jones” flick, the toll looting takes on cultural heritage is real. The tension between countries wanting to hold onto their artifacts and museums desperate to maintain priceless acquisitions extends across the world, even to the Saint Louis Art Museum, which retained The Mask of Lady Ka-Nefer-Nefer after a legal battle.

To understand repatriation and its complications, UMSL Daily corresponded by email with University of Missouri­–St. Louis Assistant Professor of Anthropology Anne Austin, who is in Egypt researching human remains at the site of Deir el-Medina, the village of the workmen who cut and decorated the Valley of the Kings.

What is repatriation, and why is it important?

For archaeologists, repatriation is the return of artifacts, human remains and any other items of cultural value to their original location or ancestral group. It is an ethical imperative for modern-day archaeologists who often inherit archaeological material that was illegally removed from its original country or culture.

What does the Coffin of Nedjemankh add to our understanding of Egyptian culture?

The Coffin of Nedjemankh dates to the end of the Ptolemaic period, a time when Egypt was ruled by Greek kings and queens like Cleopatra. The coffin is beautifully preserved and plated in gold on its exterior with some silver lining on its interior. It is covered with scenes depicting the importance of the sun and the journey into the afterlife. Its remarkable preservation makes it particularly important for understanding how wealthy individuals like Nedjemankh prepared for and envisioned the afterlife.

As you’re currently in Egypt, can you tell me about the attitudes there toward the return of the coffin?

Many Egyptians are frustrated with the fact that European museums hold some of the most important artifacts from their country like the bust of Nefertiti and the Rosetta Stone. It is rewarding for Egyptologists and Egyptians to see museums acknowledge when they have an artifact illegally and return it to where it belongs. In this case, something of incredible cultural and monetary value was stolen from Egypt, and it is rewarding to all of us to see it returned.

There’s an argument that artifacts displayed in a prominent universal museum such as the Met or the Louvre will reach a larger, more diverse and more international audience thus extending the reach of Egyptian culture. How valid is that?

Egypt is one of the first, if not the first, ancient culture many of us learn about in school. It’s the kind of culture that forces us to think about the world differently and question what we take for granted as normal. In that respect, ancient Egyptian culture should be available to as many people as possible, and it is wonderful for Americans and Europeans to have rich Egyptian collections that they can access.

However, the counterargument is that because so many important Egyptian artifacts have been taken out of Egypt, fewer people come to visit. Many Americans are more than keen to see an exhibit on King Tut at their local museum but would never imagine visiting Egypt. This hurts tourism and Egypt’s economy.

I think the best-case scenario is somewhere between these two. Non-Egyptian museums should seriously investigate their collections and work together with Egyptian authorities to repatriate any artifact, famous or not, that has been removed illegally. Given the sheer volume of Egyptian artifacts, however, there can still be collections available for museums around the world to display.

The Met acquired the coffin in 2017. When I imagine illegally acquired antiquities, I think about artifacts that have been out of the country for an extended time and have long-established, yet fake, provenances. How was this able to happen in such relatively recent history?

Many Egyptian objects end up in private collections, whether legally or illegally. It was common for European and American explorers to export Egyptian antiquities in the 19th and early 20th centuries, and it was only when the Egyptian government became independent that it was able to make such looting illegal and enforce it.

Now, no Egyptian artifacts are allowed to leave Egypt. So, when museums want to expand their Egyptian collections, they have to turn to those artifacts found in other museums or private collections. Museums like the Met verify any documentation accompanying these artifacts to determine that they were not acquired illegally, but in this case, the documents were forged. The Met is not alone in being fooled. In recent years, famous auction houses like Christie’s have also discovered that they acquired and sold looted antiquities from Egypt and Iraq.

How do different countries treat repatriation requests since there’s no hard-and-fast rule?

Repatriation often requires a demonstration that the object was removed illegally. When there are disputes around repatriation, it is often because two parties cannot agree on what is a reasonable amount of proof. One example of this is the Parthenon Marbles – several marble sculptures from the Parthenon that are now on display in the British Museum. These were taken from Greece in 1801, supposedly with permission from the Ottoman Empire. There is no definitive proof, however, that such permission was given.

What protections does Egypt have against the removal of artifacts? How large of a problem is this for Egypt?

In the 19th and early 20th centuries, Egypt was under the thumb of colonialism and many important artifacts like the Rosetta Stone were legally looted from the country. The Egyptian government now does not allow any artifacts to leave the country. They check at the airports to make sure that tourists and others are not illegally stealing ancient artifacts. This problem was particularly large just after the Arab Spring, when looting became much more common. While looting has gone down in recent years, they still routinely find people attempting to smuggle antiquities out of the country. Just last month, airport officials foiled an attempt to loot a mummified hand hidden inside a loudspeaker.

Your remarks about the Arab Spring reminded me that – much like the Parthenon Marbles – people often remove artifacts with the justification that it’s for the safety of those items. The flip side of this are reports that groups such as ISIS have funded themselves with looted artifacts. What’s your take?

If a museum removes many priceless antiquities from a country, it can then benefit from such a collection with millions of dollars in donations and then use that money to provide better facilities for the object’s preservation and study. Arguments around what’s best for the artifact often then just reinforce colonialist usurpation and create a vicious cycle that will inevitably continue due to the inequities created from the moment a priceless artifact is removed from a country.

Are there other ways that current affairs have affected the smuggling trade?

Looting in general in the Middle East has increased in recent years due to a combination of civil unrest and the growth of ISIS. While this case is a high-profile example of a museum accidentally purchasing a looted object, there are many more examples of private individuals and companies intentionally purchasing items suspected of looting. A prime example of this is Hobby Lobby, which purchased at least 3,800 illegal antiquities from Iraq after being informed that they were likely smuggled.