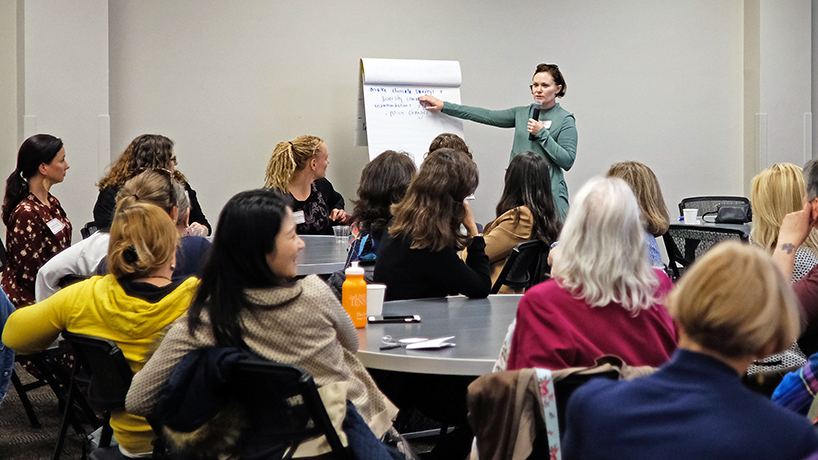 Associate Professor of Psychological Sciences Bettina Casad shares her tables’ ideas at the inaugural meeting of the Women’s Faculty Network on Wednesday. (Photos by Mona Sabau)

With almost every possible seat filled last Wednesday in Room 202 of the J.C. Penney Conference Center, the room buzzed as the gathered female faculty members stood up one by one and introduced themselves.

The size of the crowd drew a happy quip from the event co-organizer, Marie Mora, professor of economics and associate provost for Academic Affairs.

“I had to order to more coffee,” she said. “I’m was thinking that we would be successful to have 30 to 40 people come. We had almost 80 RSVP and then another dozen or so women who could not come today.”

The turnout – along with the energy in the room – befit the agenda of the event – the launch of an UMSL Women’s Faculty Network, an effort initiated by Mora along with Interim Chancellor and Provost Kristin Sobolik.

This first meeting served as a way for the faculty to set the group’s agenda. 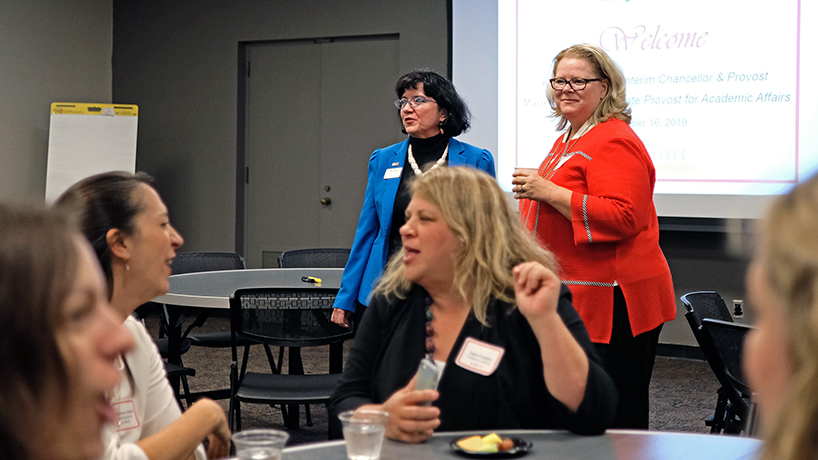 Professor of Economics and Associate Provost for Academic Affairs Marie Mora (left) and Interim Chancellor and Provost Kristin Sobolik look on as the faculty brainstorm.

“One of the things that we want to do with this network is to find ways to empower the faculty,” Mora said. “If you just look around the room, hear all the experience that we have here, let’s just tap into the energy that we have here. Also, we are looking at providing a university forum to identify and discuss opportunities as well as challenges for women faculty. We’d like to have opportunities to actively engage in networking collaborations.”

Mora hopes the group will stretch across and within colleges and departments to unite women and help with the individual challenges present in each person’s unique situation.

That’s a sentiment Sobolik echoed as she got up to speak about her own career before UMSL, including as a professor of anthropology and climate change at the University of Maine.

“When they hired me into the Department of Anthropology, I was the only woman in that department,” she said. “I remember kind of feeling alone. I never envisioned such a group as this. I’m so excited to bring forward an opportunity for this group of women to envision what it is that we want together, to empower ourselves, to help ourselves to move forward to whatever you want to become, to help support you and your endeavors and successes through the academy or outside.”

After introductions, Mora instructed each table to brainstorm challenges and opportunities for women faculty at UMSL.

Among the challenges were service, difficulties with work-life balance, engaging non-tenure track faculty, the percentage of women in leadership positions, gender pay gap, disparities in time to promotion, microaggressions and more. On the flip side, the faculty identified opportunities such as partnerships and interdisciplinary work, representing diverse voices, advocacy, women in positions of power at UMSL, good networking events at UMSL and mentoring among female faculty members.

Each attendant took different things from the event. 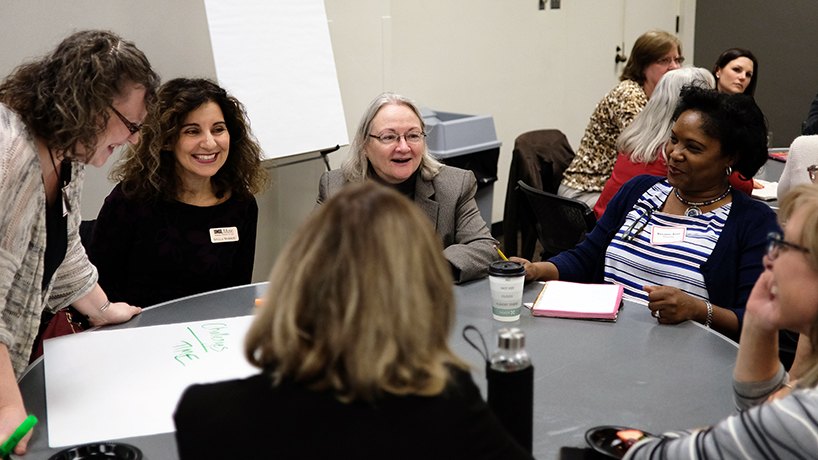 The women faculty broke into small groups to think about the challenges and opportunities present on campus.

Assistant Professor of Nursing Yuanlu (April) Sun said her desire to meet other faculty brought her in originally.

“I think it’s a very nice network because it’s women supporting women,” she said. “I’m really looking for mentorship for all my different aspects as a tenure track faculty, which is not only about research but also my personal life and service in teaching.”

Others had been wanting something like the group for years or were simply intrigued by the idea of a women’s network and wanted to check it out.

Still others were hoping the group could be an effective vehicle for change. One of those was Associate Professor of Psychological Sciences Bettina Casad.

“We have the people, the resources, the intelligence,” she said while presenting her group’s ideas. “Let’s do it.”