While completing a bachelor’s degree in computer science, Tahj Gayfield served as an UMSL ambassador and was active in Cru. Now a graduate, he will begin pursuing a master’s at UMSL while working in Bayer’s crop science division. (Photo by August Jennewein)

Between classes, Tahj Gayfield might be found enjoying an event hosted by the Office of Student Involvement. If he’s not there, he could be taking a getaway with Cru or networking with campus executives.

For Gayfield, the college experience stretches beyond coursework.

“You can make great relationships here,” he said. “Some of my closest friends are people I met in college.”

The University of Missouri–St. Louis alumnus graduated on Dec. 14 with a BS in computer science from the College of Arts and Sciences.

Gayfield discovered programming in high school computer classes. When his father recommended majoring in either engineering, accounting or computer science, he chose the one he enjoyed.

“It’s a hobby of mine,” he said. “If I have an idea for something, I just build it or write some code for it and make it happen. Computer science is a broad field. UMSL does a good job of giving us exposure to different parts of the field, like web programming, building mobile apps, machine learning and artificial intelligence.”

UMSL’s location, affordability and flexibility in class scheduling put it at the top of the St. Louis native’s list when he was looking to transfer after first enrolling at Truman State University to run track.

With his BS complete, Gayfield will join the Bayer team this month as a software developer in their crop science division. He will also return to UMSL to pursue an MS in computer science.

Gayfield’s connections on campus made the university his top choice for graduate school.

“One thing I started doing this semester was going to the Student Center, or specifically the Office of Student Involvement, and just talking to people, making time for conversation,” he said. “I met a ton of fun, awesome, intelligent people. When I started UMSL, I planned to join like 12 clubs and meet all these people, but it’s actually been better just having two and being able to focus my time on those and build better relationships.”

He’s been heavily involved in Cru, a Christian student organization that allows members to share faith-based ideas through service and outreach, and plans to spend part of winter break traveling with other Cru students to a conference in Indianapolis.

He’s also served as an UMSL ambassador since August 2018. In that role, he attended a variety of executive events, where he networked with UMSL and community leadership and discovered a fondness for interacting with others in a professional environment.

He encourages future UMSL students to take full advantage of being on campus.

“Make time for people, and make time for fun,” he said. “Definitely focus on school because that’s your main priority, but college can be so much more than just school and studying. There’s a lot you can do at UMSL. You just have to take advantage of it.”

When he’s not connecting with students and leadership, Gayfield still enjoys running on the track. He was a hurdler at Truman State University, clearing obstacles in 110- and 400-meter races.

“You fall a lot,” he said. “There’s a lot of bruises and scrapes, but you overcome them.”

It’s true – in sports, computer science and life in general. 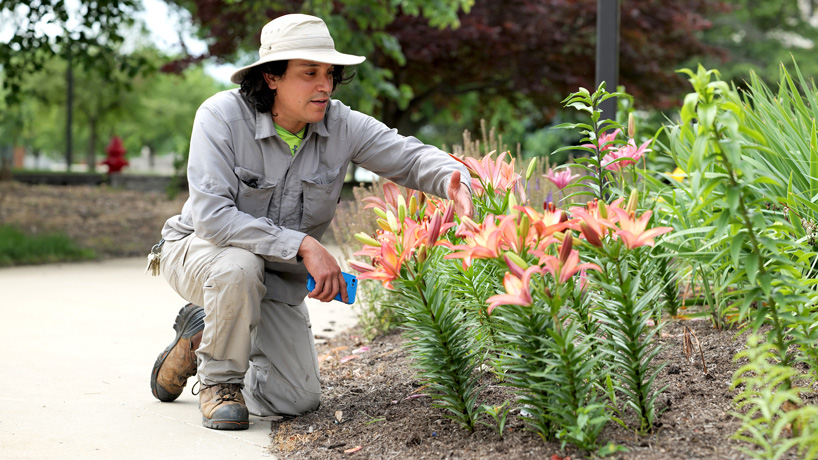