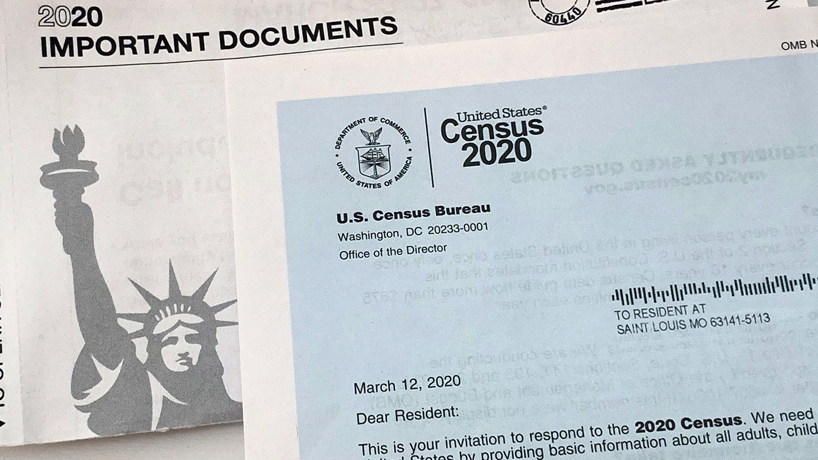 It’s important that every person reply to the 2020 census, the results of which determine how federal funds are allocated as well as representation in the U.S. House of Representatives, the Electoral College and in state legislatures. (Photos by August Jennewein)

The envelopes and postcards started arriving in mailboxes around the country earlier this month with information and instructions on how to be included in the U.S. Census.

The U.S. Constitution mandates that the federal government conduct this count every 10 years, and the results are used to determine how federal funds are allocated as well as representation in the U.S. House of Representatives, the Electoral College and in state legislatures.

Missouri lost one of its congressional seats as a result of the count in 2010. 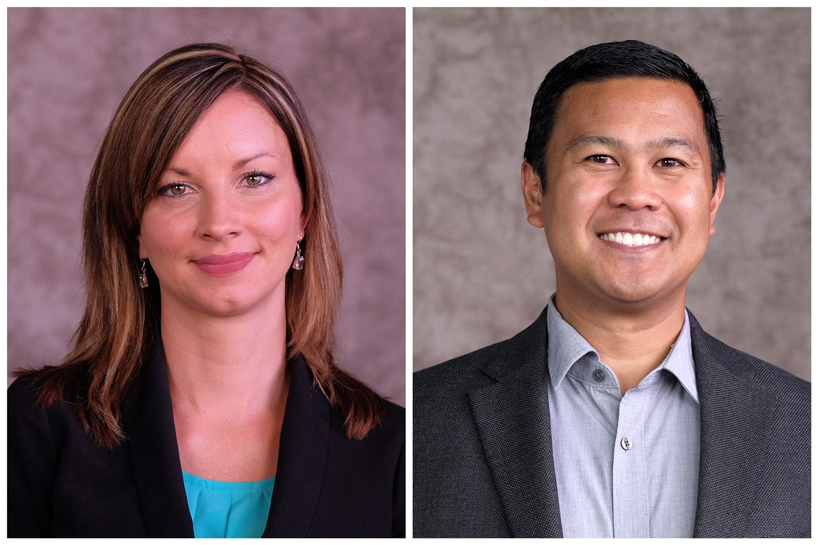 UMSL political scientists Anita Manion (left) and Adriano Udani said Missouri received about $1,300 annually in federal funding for each individual counted in the last census. Those resources are used to fund a number of programs that impact people’s everyday lives.

Anita Manion and Adriano Udani, both political scientists at the University of Missouri–St. Louis, spoke to UMSL Daily about how the census impacts the everyday lives of people and why it’s so important that everyone be counted.

Why should people, including college students, care about the census?

Manion: I think that all Missourians should care about the census because the funds that are federally allotted to us. For the last census, it was about $1,300 per Missourian per year, so about $13,000 we get federal funding for each Missourian over 10 years.

That funding goes to things like infrastructure that hopefully students should care about and things like food stamps, Medicaid, Head Start – lots of different programs that I think our students, even if they don’t benefit from, they care that Missourians have those benefits. The statistic that I heard was if 1 percent of Missourians weren’t counted, that would be $78 million that we would be leaving on the table.

Udani: I was looking at response rates from 2010, and Missouri was pretty close to the national average of 66 percent response. If you looked at the county and city, the county was 75 percent response rate, and St. Louis city is 57 percent. Because a decent proportion of the population in the city is students, it’s important for them to participate to make sure that we close any sort of disparities in a lot of the things that Anita just mentioned.

What’s different about the census from 10 years ago?

Manion: With technology evolving, some of the processes have evolved too. This is the first year they’re really encouraging people to respond online or by phone, and the last option is paper. They won’t even send those paper forms out unless you don’t respond to four postcard prompts.

How long do people have to fill it out?

Manion: If you don’t fill it out, by the end of April, the beginning of May is when you might get that knock on your door. Nobody wants someone knocking on your door, right? That should be an incentive to complete the census if nothing else.

Are some states being more proactive than others to encourage participation?

Manion: I don’t know specifically what efforts different states are doing. But I know Missouri and Illinois are both making big efforts. Missouri, for one, feels that we were under counted last time, and there were repercussions in representation and in resources. Illinois is concerned about that happening this year – losing a congressional district and losing resources. I know that both of those states are working on it, and I think every state has initiatives. A lot of them give grants to nonprofits and other organizations to head up their census efforts.

Are there disparities in who tends to be undercounted?

Manion: The populations that are least likely to be counted are people of color, immigrants, non-English speakers and children. Those all tend to be lower income populations. Adriano, I don’t know if you have different data than that?

Udani: I think you’re right. And I think with communities of color, black communities, Latino, Latinas, even Asian communities, there’s just this deep-seated fear and distrust of the government that is feeding into this and that has contributed to having low response rates.

Is that a phenomenon that has sprung up in the last few years or does it go back longer than that?

Udani: It goes back longer than that, but I think that past history is exacerbated by what’s going on now in terms of how many migrant communities and immigrant communities view the census. They know there was an effort to add a citizenship question, and they saw that as, “The government just wants to collect data on me so that they can deport me.”

But the Supreme Court struck down the citizenship question. The census cannot share information collected to ICE, to Border Patrol, etc. I know that in other areas of the country there’s been a concerted effort to reach out to immigrant communities to make sure people understand that, and a lot of these outreach efforts have been conducted by immigrants themselves, which is great to see.

If there’s one critique that I would make in some of these national public service announcements, I wish they would have made a little more effort in making it clear that that data that is collected on the census isn’t shared with ICE. There’s a lot of visuals and symbols that say, “It’s OK to report, it’s OK to report.’ But a lot of Mexicans and Central Americans are just worried about participating.

At the end of the day, people just need to fill out the census regardless of who they are.

Manion: There’s a certainly a particular mistrust among immigrant communities, but I think a lot of people have mistrust of the government in turning this information over. Like Adriano said, there are regulations that say the Census Bureau cannot give this information to anyone – not your landlord, not the IRS, not ICE, anyone – for 72 years. There are federal penalties. It’s a felony if that information is disclosed, even to other government agencies or law enforcement. They cannot share it with anybody. I don’t think that that is widely understood by most Americans.

Anita, I know you were working with the North County Complete Count Committee. What types of actions has that group taken to encourage people to participate?

Manion: Of course, all the events are postponed or put on hold right now, but they identified communities in the north county area that were undercounted in the last census, and they were really making a concerted effort not just to go out and have people complete the census themselves but to educate community advocates. For example, the training that I went to a couple weeks ago included residents of Ferguson and others who wanted to help. They trained us to talk to other people about the census. They were trying to work through trusted organizations like schools and have kids take information about the census home to their parents. Educate children, so they feel more comfortable and confident. Libraries have been big partners. The city government also is playing a big role in that. They were trying to engage landlords, so when people pay their rent, they would remind them to complete the census. There are a lot of different ways they’re trying to work through existing trusted structures to reach folks.

Where should students get counted?

Manion: Residential students should be counted where they reside primarily, which would be their dorm at college, and usually the college facilities take care of that. The dorms do a count.

What efforts especially are done if anything to count homeless people?

Udani: You really have to build a trusting relationship with the street-level workers who they trust. Those connections at the ground level with the homeless shelters, the food banks – they are the ones who are going to be mediating the relationship between the government and those populations. I think the more census workers can build up that trust, the better that at-risk populations, hard-to-reach populations are going to be represented.

How will the census impact UMSL?

Manion: That’s a good question. It’s not just to draw U.S. congressional districts but also our Missouri State House districts. So that could change different districts where students live – whether that’s in the dorms or in surrounding areas – and what their power in the Missouri State Legislature might be, what their representation might look like. It’s very possible that our students get different government that benefits like SNAP, Medicaid or other programs like that.

Udani: I went straight to infrastructure. We received a lot of state funding to make UMSL and Natural Bridge Road look really nice. It’s wonderful. Eight years ago when I drove up, it looked pretty dismal. I think economic development leaders made a concerted effort to make that stretch on Natural Bridge Road near campus look nicer. It looks a lot more welcoming. With the additional funding like who knows, maybe we could expand that.

Having people fill out the census is the only way to have any evidence to pour more resources into our area. It’s gotten a lot better, but it’s incomplete. So we need more participation in the census.

Manion: Piggybacking on that, census data isn’t just used for government to allocate funds and representation. But businesses look at that to find out where population centers are and different groups of people. So if you want to attract a nice grocery store into the UMSL area or other restaurants and businesses, they look at census data to figure out where people are and where they should locate.