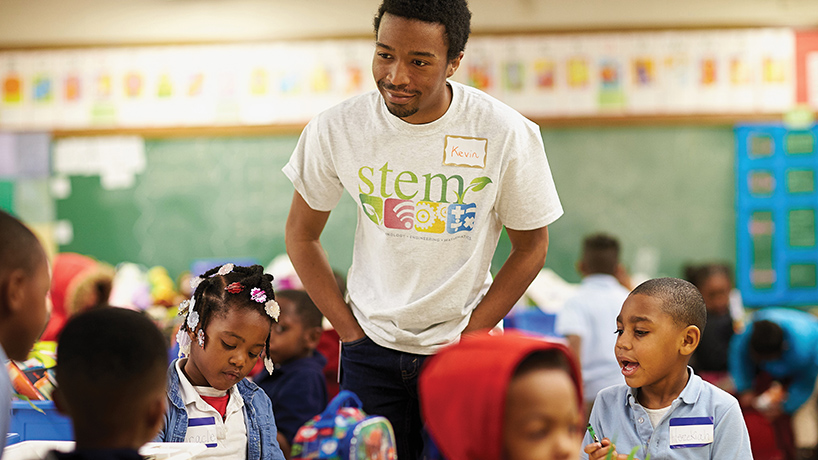 Alumnus Kevin L. Cox Jr. was one of 15 scientists awarded a 2019 Hanna H. Gray Fellowship, which comes with a $1.4 million award to support postdoctoral and faculty research. (Photo courtesy of the Donald Danforth Plant Science Center)

Please see attachment. That was all the email said.

“Just like last year,” University of Missouri– St. Louis alumnus Kevin L. Cox Jr. recalls thinking. A year earlier, he’d been a finalist for a place in the Hanna H. Gray Fellows Program only to receive a “we regret to inform you” attachment.

A postdoctoral fellow at the Donald Danforth Plant Science Center, Cox had good reason for his exuberant reaction last September. The Hanna H. Gray Fellowship, issued by the Howard Hughes Medical Institute, came with $1.4 million to support up to four years of Cox’s postdoctoral research and then an additional four years of funding as an independent faculty member. The award is given annually to 15 exceptional and diverse early career scientists.

Cox is grateful for how the fellowship will facilitate his long-term dream of starting his own lab and support his research at the Danforth Center, where he studies plant pathology. He’s studying what plant genes are activated or deactivated by different pathogens in the hopes of making them more resistant to diseases. This has implications for the global food supply, including reducing dependence on herbicides and pesticides.

A Florissant native, Cox finds meaning in receiving the fellowship in St. Louis, the place he discovered his professional path while an undergraduate at UMSL. He’d grown up wanting to be a pediatrician.

“I have a passion for helping others,” he says. “I did well in science courses, but I never saw that as a career because I didn’t know that was something that you could do.”

As a sophomore, Cox took a microbiology course and knew he’d found his career. That led to a part-time job at the Danforth Center as a junior. He remained there until graduating in 2013 with a BS in biology and a minor in chemistry before starting graduate studies at Texas A&M University.

Cox also credits his time as an UMSL Ambassador, which helped him break out of his shell and learn skills such as networking and public speaking. Those bore fruit for Cox when he attended the 5th International Conference on Biotic-Plant Interactions in China during graduate school. There he recognized Danforth Center Principal Investigator Blake Meyers, whom Cox admired but had never met.

He introduced himself. A few months later, Meyers invited Cox to the Danforth Center to give a talk and interview, which turned into a job offer.

As he continues to get established in his own career, Cox is making sure children, many of them underrepresented minorities, know that they also can grow up to be scientists. He can regularly be found giving science lessons or career advice in area primary schools.

“I’m a real advocate for outreach,” he says. “It gives the students a chance to see that this is possible for anybody.”