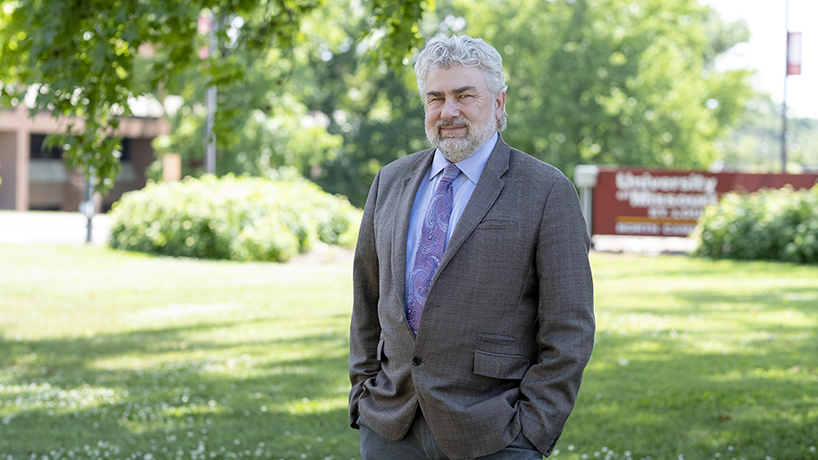 Chris Spilling is the new vice chancellor for research and economic and community development at the University of Missouri–St. Louis. (Photo by August Jennewein)

During his 31 years at the University of Missouri–St. Louis, Chris Spilling has been a faculty member and a department chair and then moved into administration, holding positions such as interim vice provost, interim provost and, most recently, as vice provost for graduate studies and research.

In his words, he’s “grown up through the ranks” at UMSL.

All that has given him the background and perspective needed to assume a role that’s new both to him and UMSL. Today Chancellor Kristin Sobolik announced that Spilling would assume the newly created position of vice chancellor for research and economic and community development.

“I think I understand what the faculty and the students need,” Spilling said. “I was also a first-generation college student – in England, admittedly – but I can certainly identify with many of the students that UMSL is educating. Understanding the mission of the institution is very important to have in a senior leadership role.”

Spilling will continue to lead and guide research at UMSL while adding community and economic development, which includes the Anchor Institution Initiative headed by Assistant Vice Chancellor Karl Guenther and the Community Innovation and Action Center.

In his new role, Spilling reports directly to the chancellor, a reorganization that reflects the structure of the other three University of Missouri System universities.

“This change elevates the important role that research has at UMSL, one of only four public research institutions in the state,” Sobolik said. “As we continue to engage more heavily in economic and community development, the collaborative synergy with research will advance UMSL, St. Louis and the region. Chris is the right person to lead our efforts on these fronts, and I’m looking forward to working on new ideas with him and his team.”

Shepherding both research and community means that Spilling will be overseeing two of five Missouri Compacts for Excellence named in UMSL’s strategic plan: research and creative works and community engagement and economic development. It’s a big job, but Spilling looks forward to the responsibility.

Spilling sees the combination of research and community development as a natural marriage. Of the approximately $27 million in research expenditures in fiscal year 2019, a large fraction involved community-engaged projects.

“UMSL is exceptionally strong in the social sciences and many of UMSL’s faculty are deeply embedded in communities in the region,” he said. “I see strong potential for research growth related to some of the most challenging issues facing our community from growing mental health needs to the need for racial and justice reform.”

In order to ensure that collaborations happen effectively, Spilling is working on melding what were once disparate teams together.

“We have a lot of really skilled and talented individuals in this new vice chancellor’s office,” he said. “I think we’re much stronger as a group.”

The group is already in the midst of putting together a National Science Foundation proposal for a collaborative civic engagement project that would bring Spilling together with researchers from the CIAC. Meanwhile, Director of Research Development Cynthia Jobe and others are working on CARES Act funding opportunities.

The pandemic has brought with it both opportunities – such as when then Office of Student Financial Aid distributed $2.9 million in CARES Act funds to students in May – but also considerable challenges.

Spilling projects current research expenditures to be consistent with last year – an accomplishment amid a pandemic that has necessitated working from home.

“Now, obviously, what we have to do is position ourselves to come out the other side in a much stronger position,” he said. “Be ready to attack a growth phase again. We have very ambitious goals, and the new unit will have ambitious goals, too. I think we can achieve them, but we have to have lofty targets for the institution.”

Spilling has a habit of achieving his ambitious goals. In his four years as vice provost for graduate studies and research, research expenditures grew from $15 to $27 million. Looking back, that’s one of the accomplishments he’s most proud of along with the creation of programs that support faculty development such as the Early Career Research Network, the Early Career Research Symposium and the Mid-Career Research Investment Program. Now entering its fourth year, the ECRN program is showing strong outcomes in terms of faculty productivity. Almost all of the participants in the first two cohorts have went on to receive grant funding and are building strong research programs.

His passion for those efforts speaks to Spilling’s faculty background. After earning his PhD at the University of Technology in Loughborough, England, he completed a postdoc at Northwestern University. From there, he came straight to UMSL and hasn’t left since except for a one-year sabbatical at the University of Cambridge in 1996-1997.

Spilling considers coming to the U.S. to be one of the best decisions he’s made, and UMSL and St. Louis have been a great fit for his career and ambitions.

He sees those deep roots as key for his next steps.

“I actually live in this community,” he said. “I live in Bel-Nor. When I think about community development, economic development for the university in the area, it serves me in two roles. One is a resident of the area, and the other one is an employee of the institution. I’m pretty excited by the opportunity to make all of those things work. As I said, we’ve got a good team that will work on this. I have a lot of confidence that we’ll be able to make a difference.”