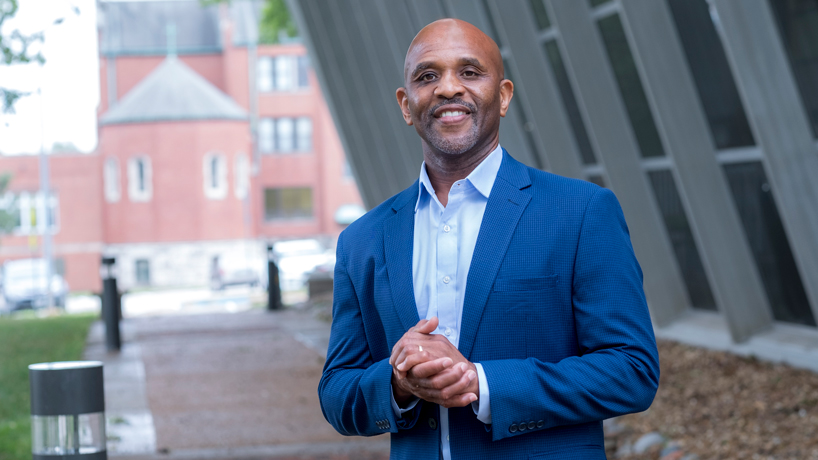 Jerome Morris, the E. Desmond Lee Endowed Professor of Urban Education at UMSL, was named the recipient of the Lyle M. Spencer Research Award. Morris has studied the impact of school reforms, as well as the links between race, social class and the geography of educational opportunities and Black communities in the South for more than 20 years. He will use the $1 million prize to investigate his theory of communally bonded schooling in three local school districts. (Photo by August Jennewein)

Morris, the E. Desmond Lee Endowed Professor of Urban Education at the University of Missouri–St. Louis, joined their ranks recently with a $1 million award to investigate his theory of communally bonded schooling.

He pointed to the company he’s now keeping not to brag but as an indication of the extraordinary work that is happening at the university – work that is on par with esteemed research institutions across the country.

“This is excellent news and a testament to important research that will shed light on school reforms and help transform lives,” Sobolik said.

There’s no debating that Morris is a first-class researcher.

Before coming to UMSL in 2015, he was a professor in the College of Education at the University of Georgia and a research fellow at its Owens Institute for Behavioral Research. For more than 20 years, he’s studied the impact of school reforms, as well as the links between race, social class and the geography of educational opportunities and Black communities in the South.

Morris has also written scores of scholarly articles and two books on the topic of urban education, “Troubling the Waters: Fulfilling the Promise of Quality Public Schooling for Black Children” (Teachers College Press of Columbia University), and “Central City’s Blues: A Song of Race, Place, and Life in the Housing Projects of the Urban South (forthcoming).”

“The Spencer Foundation understood the record I had and what I had done,” he said. “I had put that framework out there, so this is an opportunity to further develop it.”

“Jerome’s commitment, over several rounds of proposals to the prestigious Spencer Foundation, is testament to the quality of his scholarship, the significance of his area of research and his determination to further grow this work in the St. Louis region,” Taylor said.

He noted that a common missing element in education reform research is the relationship that students have with their schools and how a sense of connectedness and trust can lead to improved academic outcomes. When those things are divorced from each other in education reform, there are unintended consequences. This especially true for Black students.

“When people go to school and they feel connected, they feel like they belong,” Morris said.  “They feel like educators affirm who they are. If they don’t have to fight to get an education and there’s a sense of trust, then they’re more likely to be engaged and do well.”

Morris said in terms of Black education, many researchers have also missed the historical relationship Black people have had with schools and their communities. During the legal segregation era – what he identifies as 1865 to 1970 – schools served as pillars in Black communities, fostering a sense of trust between educators, parents and students.

“I would say a barrage of educational reforms and policies have disrupted that relationship,” he said.

It was often eroded through desegregation policies, like those in St. Louis, which at one point transferred 13,000 Black students a year out of the city into predominantly white suburban districts. Those students faced a fractured relationship with their suburban schools because they were “fish out of water” in others’ communities. Predictably, many Black students struggled.

“It’s important to rebuild these relationships,” Morris said. “Albeit, many of them existed during a segregated era, it’s important to rebuild these relationships because we see even more today this disconnect that Black students have with schooling – in predominantly Black schools in terms of the connection that schools have with communities and when they go to predominantly white schools, there’s a sense of not feeling part of the school culture and community.”

State takeovers and school closures have produced similar problems. Schools that are deemed failing typically are poorly funded due to an impoverished tax base. They’re also more likely to be predominantly Black. Morris said that causes uncertainty around the viability of schools in the lives of Black children.

“You’re going to get failing schools if you don’t have that overall community, economic and political support,” he added.

That’s why he views his theory of communally bonded schooling as an ecological approach concerned with supporting families and communities.

The three teams will be made up of people from those communities, which is rare for this kind of undertaking.

“They will be residents in those neighborhoods,” Morris said. “They’re helping engage in the research enterprise, helping to recruit participants, interviewing participants. These are people who are going to be trained in research techniques and methodologies.”

“What I’m hoping from this work is that from studying these communities, we will have a better sense of those factors that are conducive to inform this communally bonded model,” Morris said. “Some of the work I’ve done was based on elementary schools. Now, I’m incorporating middle and high schools into that theoretical research. We will have a better sense of what communally bonded schools look like.”

Morris believes St. Louis is the perfect place to do this research, too. He describes it as a “Northern, Midwestern and Southern city,” a convergence of cultural identities. In that way, it’s a microcosm of the whole country.

“It’s a unique place to do this kind of work because when we understand St. Louis, we can, I think, understand what goes on in the rest of the country,” Morris said. “So, it’s applicable on a national level.”