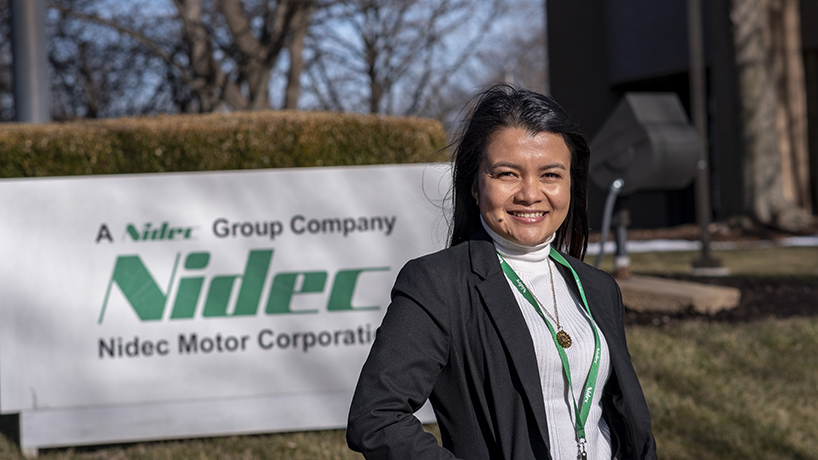 Donnalyn Weir immigrated from the Philippines in 2008 and restarted higher education in the U.S. She’s now a UMSL/WUSTL Joint Undergraduate Engineering Program graduate with a job as an application engineer at Nidec. (Photo by August Jennewein)

Ask Donnalyn Weir her defining characteristic and she’ll tell you that she’s hardworking.

That’s undeniably true of the University of Missouri–St. Louis/Washington University in St. Louis Joint Undergraduate Engineering Program alumna, a Filipino immigrant who started from the ground up in the U.S., often sleeping just five hours to fit everything in.

But it’s her boldness that’s central to Weir’s success.

“I was very aggressive,” Weir says, recalling her insistence on testing out of English courses. “I’m a go-getter. Even if I feel like I’m not going to be good, I fake that confidence at first. Because I was like, ‘I want to have this. I want to go to school.’”

One could classify her whole story as daring: Weir immigrated to the U.S. in 2008 without finishing her college degree in math, found a job at St. Louis Lambert International Airport and rose to multi-store supervisor, and mastered community college despite an initial unfamiliarity with technology such as the TI-84 calculator and English as her second language. She enrolled into the joint engineering program, landed the Boeing Engineering Scholarship, built relationships that led to a co-op at Nidec Motor Corporation, found a mentor there, impressed with her work ethic and personality and earned a job as an application engineer.

Along the way, she has inspired those around her to better their lives. Now she’s determined to give back as an advocate for women and immigrants in STEM.

“It’s something I’m very passionate about,” Weir says. “I want to set an example to other immigrants who don’t have anything and want to be successful in any field that they choose that you can do it. I think, in a way, I helped my Filipino friends see that they can be successful.”

After graduating in 2020, she became a mentor with the joint engineering program’s Mentor Collective and now works with four students – two women and two men – who are immigrants.

“I want them to feel, as an engineer, as female or immigrants and minority, that they can be successful,” Weir says. “I was very scared at first, going into engineering because I said, ‘Oh, my God. I’m a woman. They probably think I don’t know anything.’”

Weir has benefitted from mentors such as her first boss, Nidec Senior Engineering Consultant David Eisenbraun. She recalls interviewing and being open about her lack of experience but displaying eagerness to learn. Not knowing how to answer a question about the real-life manifestation of negative frequency, Weir looked it up to include in her thank you note, clinching the position.

The September before she was due to graduate, she intrepidly reached out to Nidec’s vice president of engineering and asked if she had a future there. That January, she became a full-time employee.

“Coming here with nothing, finishing school and becoming an engineer is a big thing,” Weir says. “Now, I’m a professional. I’m part of something bigger that helps people. It’s really my American dream to be an electrical engineer. I started from nothing, and now I’m doing what I love.”