Busy only began to describe the day for Katie Wilhelmus and the group of University of Missouri–St. Louis College of Optometry students who volunteered at a one-day charitable children’s eye clinic run by the global nonprofit OneSight on Aug. 21.

Their work began at 7 a.m., when they pulled into the parking lot at GEHA Field at Arrowhead Stadium in Kansas City, Missouri, and started helping set up and train the non-optometric volunteers. As their young patients began trickling in, Wilhelmus switched to triaging – taking visual acuity, testing color vision and eye pressure and putting patients through the autorefractor, a machine that estimates prescriptions by measuring how light enters the eyes.

She got into the groove as the day progressed, switching roles with the other volunteers and trying to move everyone smoothly through.

“I personally was so worried about the flow of things at some point, I almost forgot why we’re there,” Wilhelmus said. “Then I looked over, and I saw this girl looking at the mirror with her glasses on, and she looked so happy. That was the best feeling that you can have. It warms your heart.”

The positive vibes that come with helping their patients see were the bonus for the UMSL group. They were led by Assistant Clinical Professor Tareq Nabhan, who brought a small group comprised of Wilhelmus – along with fellow students Alisha Musau, Patrick Stifter and Kristin Doefler – who’d recently been through his Affinia Healthcare rotation.

Over the course of the day, they and approximately 50 other volunteers from OneSight, Oakley and the Kansas City Chiefs served 103 patients, 95% of whom were children. Optometry student Alisha Musau (left) performs a refraction test on a patient during the one-day clinic. (Photo courtesy of the Kanas City Chiefs)

The event was sponsored, in part, by the 15 and the Mahomies Foundation and run by OneSight. UMSL got brought into the loop because of Nabhan’s existing, seven-year relationship with the global nonprofit.

Nabhan had long wanted to bring his students into the loop and saw the one-day clinic as the perfect opportunity. Not only did it serve as a pedagogically useful exercise, but having fourth-year students rather than working doctors, who need to take time off and reschedule patients, made practical sense.

There was also humanitarian benefit. For Musau, that was a large part of the draw.

“I love doing vision screening and volunteer work,” she said. “We saw all sorts of kids from all backgrounds, and working with them, being in community health and promoting public health for people who may not otherwise get it. That’s what I want to get into, and I felt this was a good program to get more exposure to that.”

Organizations such as the Boys & Girls Club of Greater Kansas City, the Kansas City Public Schools and Operation Breakthrough identified children in need of vision care and arranged for them to be at the clinic. Those groups also served as the contact point for any patients that needed further care.

Oakley donated lunch and snacks for the children, and the Chiefs had multiple forms of entertainment – football drills, an art tent, building blocks, jump rope and more – in addition to the promise of a new pair of glasses, if needed, for those waiting.

Of the patients treated, the group issued 39% glasses, which Nabhan says is about average for the need rate in the U.S. population. The students also issued referrals for specialty care for four of their patients. 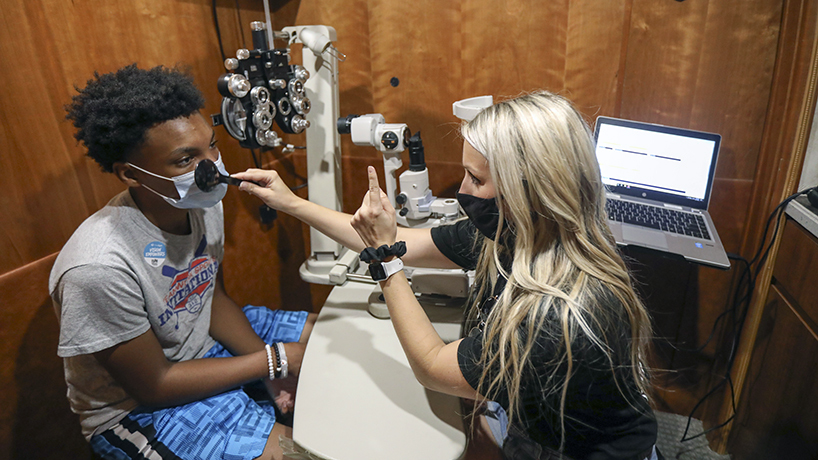 Optometry student Kristin Doefler (right) covers one of her patient’s eyes to test how well they work together. (Photo courtesy of the Kansas City Chiefs) 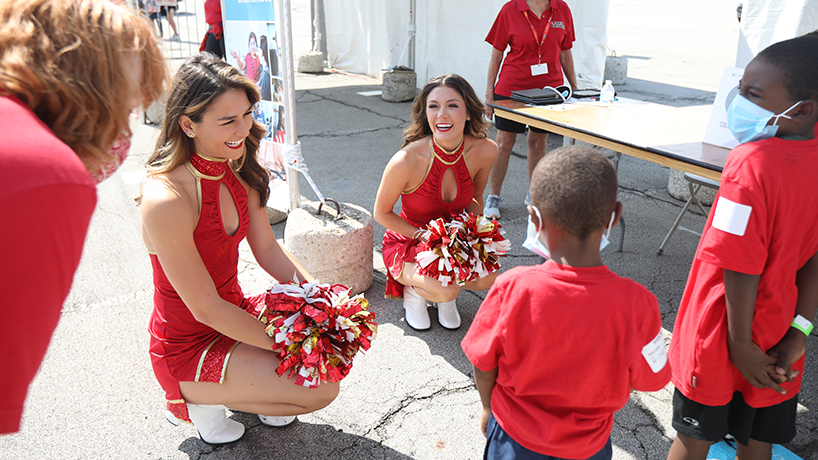 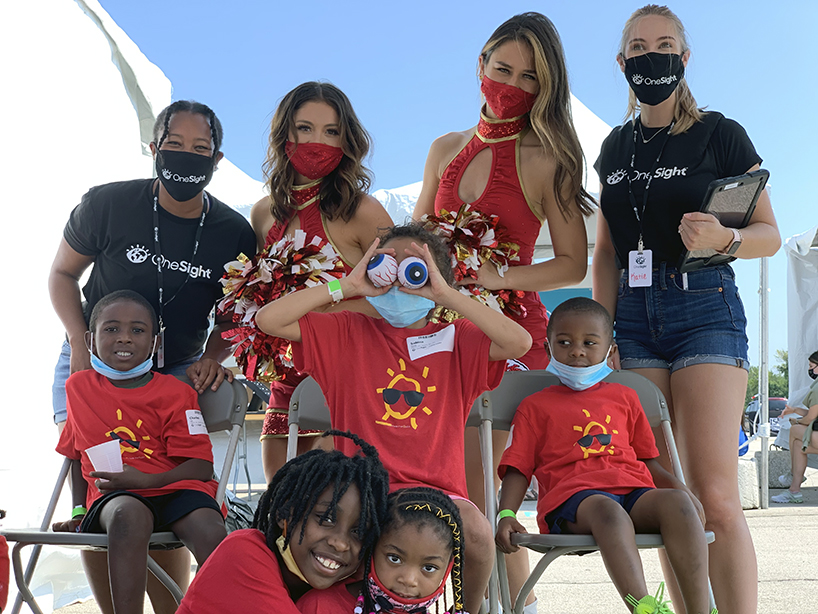 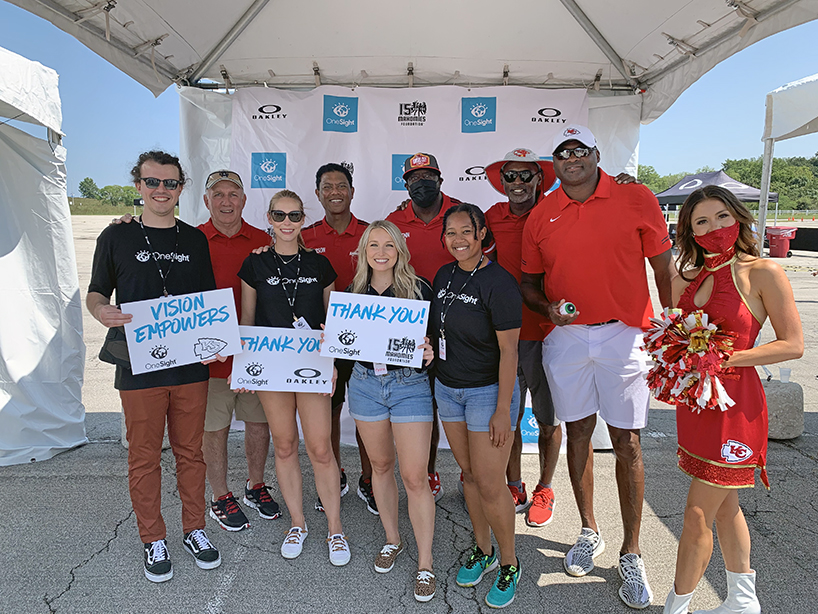 One of those was a patient that Wilhelmus screened.

“When I was checking the health of her eyes, I saw a lot of scarring in the back of her eyes,” Wilhelmus said. “She couldn’t see, and I guess no one knew at that point.”

Scarring can be caused by trauma, Wilhemlmus and Nabhan noted, but since it was present in both eyes, it more likely came from a systemic issue such as diabetes or infection.

“When you see these patients, you have no idea what their medical history can be because it may not even exist,” Nabhan said. “This may be the first encounter that they have with a physician. The students did a great job identifying this issue.”

Precautions to stop the spread of coronavirus meant the clinic looked a bit different than it might have in previous years. The patients’ eyes weren’t fully dilated, which made identifying health issues more challenging than normal.

“It was kind of tough because, the beginning part of the day, I felt like every single patient that came through had a really high prescription,” Musau said. “I’m like, ‘This is not an easy refraction.’ That was probably one of the more challenging things, and you still want to give each kid specialized care and enough time.”

But despite the challenges, each participant found the experience valuable, and OneSight left impressed with the students. Nabhan says he’s sure they’ll partner with the college for future events, in which a broad group of optometry students can get involved.

“These things aren’t possible without their participation, and they didn’t hesitate,” he said. “These students, all four of them, are the ones that made this happen, and I can’t thank them enough.”