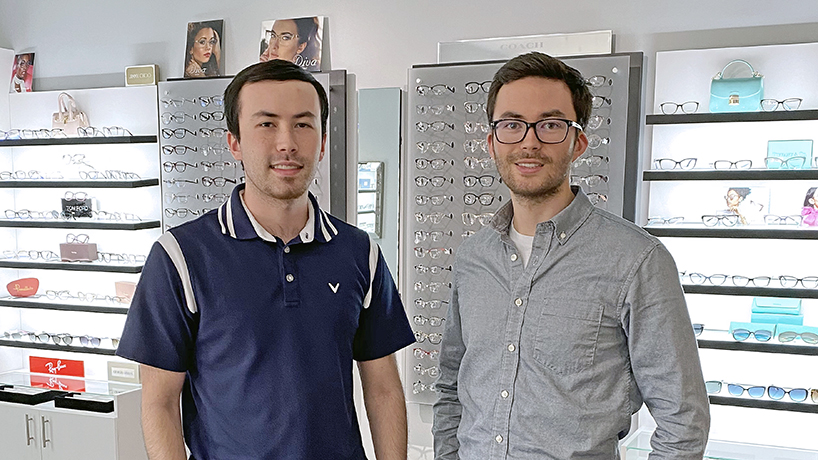 Next fall, Jon Kane (left) will follow in the footsteps of his elder brother, Alexander (right), when he plans to start classes in optometry school. Both brothers attended UMSL for undergraduate, participating in the Honors College and studying biology. Alexander now owns an optometry practice, Premier Vision Center, in their hometown of Springfield, Illinois. (Photo courtesy of Jon and Alexander Kane)

With an ophthalmologist mother and a dentist father, dinner conversations for brothers Alexander and Jon Kane were a bit different.

“Just random, weird, grotesque stories of either what happened in their days or in the past and stuff like that,” Alexander Kane said. “I think we were always on the medical track, whether we realized it or not.”

That’s proved true for Alexander, who graduated from the University of Missouri–St. Louis with a BS in biology and a Pierre Laclede Honors College certificate in 2016 and matriculated into the UMSL College of Optometry. After graduating in 2020, he started a practice, Premier Vision Center, in his hometown of Springfield, Illinois.

Alexander’s younger brother is following in his footsteps. Jon expects to graduate from UMSL in the spring with a biology degree and an Honors College certificate and plans to enter optometry school next fall.

“I was in my later years of high school and beginning college when he was in optometry school, so I got to see his trials and tribulations, but I also got to see the payoff in his learning optometry,” Jon said. “You’re basically gaining a handbook or guidebook to the human body’s health and well-being, and I find that fascinating.”

In addition to serving as inspiration for each other throughout their academic and professional experiences, Jon and Alexander’s bond as brothers have helped them persevere and succeed.

So much so that the plan is for Jon to join Alexander at his practice after graduation.

“We kind of balance each other out. I think being in business together would be very good for both of us.”

Not only did their interests in optometry spring from their mother’s profession and a desire to go into primary care – optometry – versus surgery – ophthalmology – but Alexander also discovered UMSL thanks to a family connection.

Working in his mother’s office and talking to another student worker, he learned there were only, at the time, 19 schools of optometry in the U.S. and that nearby UMSL had one of the few.

Being able to go directly from undergrad to graduate school appealed to both Alexander and Jon, and both joined the Honors College as well.

One of Jon’s favorite classes so far covered the fear of disease from a social sciences perspective and was taught by Assistant Teaching Professor Rob Wilson.

“It just so happened to be incredibly useful,” he said. “Because then the next year COVID came out, and I could see everything we talked about in class play out in real life.”

Alexander noted the Honors College’s small class sizes, which felt similar to the College of Optometry. One thing that wasn’t similar, however, was the workload.

He went from taking about 16 credit hours a semester to 20. Initially, that was quite tough, but he adapted over time, especially once they started studying the eyes specifically.

“At one point, we had a model of a head from just the shoulders up, and we had to literally map out and name every single muscle on that model for a test,” Alexander said. “It was difficult.”

Having a sibling who has already gone through the rigorous program likely will be helpful to Jon, who has already benefited from his brother’s experience. Alexander has helped out when he can, even relearning some calculus when Jon was stumped.

Alexander’s apartment has also been a refuge at times for Jon, who will drive over to hang out or to get some studying done away from the distractions of his dorm.

“It was really nice, and I’m so grateful,” Jon said. “Sometimes I find myself stuck on a question or concept or maybe how a class works. I can turn to my brother, who’s done it before, and ask him his opinion on the situation.”

Alexander looks forwarded to seeing Jon go through optometry school and also for him to graduate and join the practice. He hopes that with Jon along, they can hire another optometrist and open a second location in Florida, where the Kane brothers’ parents now live.

Until that time, though, they’ll content themselves with finding satisfaction in a profession that they both enjoy.

“It’s going to sound a little cheesy, but I just like helping people,” Alexander said. “There’s so many more ways you can help people as an optometrist than people realize.”