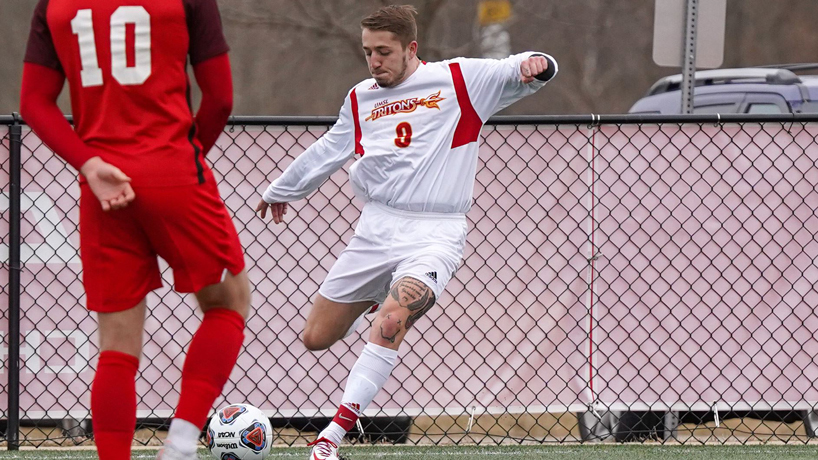 Forward Garrett Bass notched one of three UMSL goals in the men’s soccer team’s 3-2 victory over William Jewell on Sunday in Liberty, Missouri.

Men’s Soccer
UMSL evened its record at 4-4-1 – 3-3-1 in Great Lakes Valley Conference play – after playing Rockhurst to a scoreless draw on Friday night and beating William Jewell 3-2 on Sunday, both on the road. Goalkeeper Austin Reis made three saves in Friday night’s shutout. Arman Kovac, Bradley Fritsche and Garrett Bass all scored to help the Tritons build a 3-1 lead through 68 minutes of Sunday’s match, and they held on to win. UMSL returns home from its road trip and will take on Drury on Friday and Southwest Baptist on Sunday.

Women’s Soccer
The Tritons had a successful road trip, pulling out a 1-1 tie on Friday at Rockhurst before shutting out William Jewell 1-0 on Sunday afternoon. Jalyn Richardson scored on a breakaway in the 32nd minute against Rockhurst, and Jaycee Cotton notched the loan goal on a deflection in the ninth minute against William Jewell. Goalkeeper Paige Schwartz had five saves in Friday night’s draw but went untested in Sunday’s shutout. The Tritons (5-4-1, 3-3-1) will face Drury on Friday and Southwest Baptist on Sunday at the Don Dallas Soccer Field.

Volleyball
UMSL stretched its winning streak to seven matches by dispatching of McKendree in straight sets on the road Friday, but the streak ended Saturday with a five-set loss at Southern Indiana. Mya Elliott had a team-high 14 kills against McKendree, and Charlotte Richards had 11 before registering 28 kills in the loss to the Screaming Eagles. Megan Woll combined for 52 digs in the two matches. UMSL (10-3, 5-1 GLVC) will take on Missouri S&T at home on Tuesday night before visiting Truman State on Friday and Maryville on Saturday.

Men’s Golf
Joel Sylven placed ninth individually and helped the Tritons to a seventh-place finish out of 18 teams in the Missouri Southern State University Fall Invitational played at at the Shangri-La Country Club in Monkey Island, Oklahoma. Sylven fired rounds of 75, 74 and 68 to climb into the top 10 with a total of 217. Juan Antonio Padilla and Nick Hedberg were the next closest UMSL finishers in a tie for 49th place, and the Tritons posted a combined score of 891 in the 54-hole tournament. UMSL will next host the Midwest Regional at Fox Run on Oct. 11-12.

Men’s and Women’s Swimming
UMSL swimmers raced in the Show-Me Showdown last Friday in Columbia, Missouri, against a field that including the University of Missouri–Columbia, Lindenwood University, Maryville University, Saint Louis University, Truman State University, Washington University in St. Louis and William Jewell College. The 200-yard freestyle relay team of Aiden Clark, Austin Stevenson, David Reynolds and Jon Osa led UMSL’s list of top-10 finishers by posting a finals time of 1 minute, 24.67 seconds to place third. Osa, Reynolds, Guillem Masjuan Roca and Clark were fourth in the 400 freestyle relay with a time of 3:08.31, and Conley Savage, Stevenson, Osa and Clark finished fifth in the 200 medley relay with a time of 1:34.82. On the women’s side, Ava Boehning, Kristen Stalder, Seela Wang and Serena Brizard finished fifth in the 200 freestyle relay with a time of 1:42.05. The Tritons will compete against Maryville and William Jewell Oct. 15-16 at the Mark Twain Athletic Center.