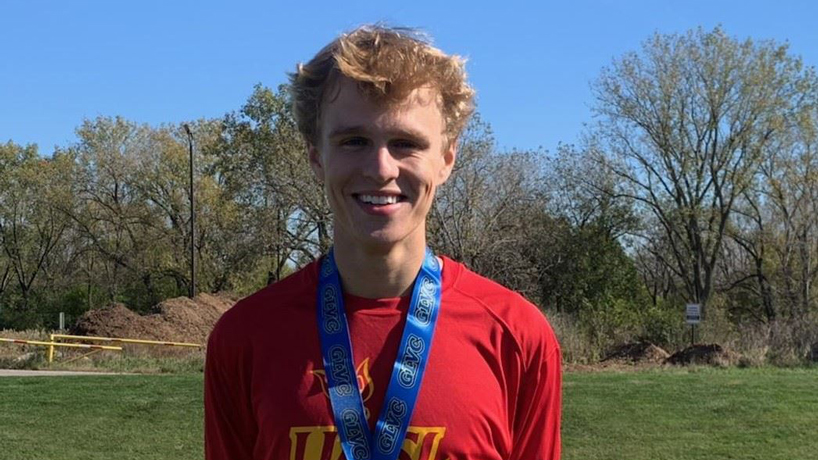 Men’s and Women’s Cross Country
Sophomore Jacob Warner became the first UMSL cross country runner to capture all-conference honors since the relaunch of the program last year. Warner, a Mississippi State transfer, finished 16th Saturday in the Great Lakes Valley Conference Championship, clocking a time of 24 minutes, 55.69 seconds in the 8-kilometer race held in Romeoville, Illinois. Warner led the men’s team to an 11th-place finish in the 14-team field. Freshman Sam Savastino was UMSL’s next highest men’s finisher in 71st place with a time of 26:21.38 seconds. The women’s team finished 12th place in its conference championship. Freshman Lily Wagemann was UMSL’s top individual finisher in 65th place with a time of 24:15.57 in the 6-kilometer race. Warner will next run in the 10-kilometer NCAA Midwest Region Championship on Nov. 6 in Evansville, Indiana.

Women’s Golf
The Tritons wrapped up their fall schedule by winning the McKendree Dual Gender played last Monday and Tuesday at Far Oaks Golf Course in Caseyville, Illinois. They finished with a three-round total of 884, including a second-round team score of 286 to set a school record. UMSL was nine shots better than runner-up Lindenwood in the nine-team field. Freshman Tove Brunell took medalist honors with a 54-hole score of 213, and Juliette Lecomte was runner up with a total of 220. Jenna Teeter and Manon Labeur also landed in the top 10 individually. The Tritons climbed into the national rankings at No. 24 after last week’s victory.

Volleyball
UMSL suffered its second consecutive loss Friday when it dropped a five-set match on the road at Drury, 15-25, 19-25, 25-23, 25-17, 15-11, but the Tritons rebounded on Saturday with a sweep of Southwest Baptist on the road in Bolivar, Missouri. Charlotte Richards combined for 34 kills in the two matches. Megan Woll had 22 digs in both matches. UMSL (16-6, 8-2 GLVC) plays host to Lindenwood Friday in its only match of the week.

Men’s Soccer
Garrett Bass, Leo Sowa and Drew Schenk all scored as the Tritons pulled out a 3-2 victory over Lindenwood Sunday afternoon at Lou Fusz Soccer Complex. Bass got UMSL on the board in the 18th minute when he scored on a penalty kick, and Sowa’s goal in the 33rd minute doubled the lead as the Tritons led 2-0 at halftime. Lindenwood scored twice after intermission, but Schenk’s goal in between in the 77th minute proved just enough. UMSL (7-6-1, 6-5-1 GLVC) has won two in a row as it gets set to close out the regular season with home matches against Southern Indiana and McKendree on Friday and Sunday, respectively.

Women’s Soccer
The Tritons got off to a quick start against Lindenwood with a goal from Ayana Weissenfluh in the match’s second minute, and they went on to pull out a 2-1 victory Sunday at the Lou Fusz Soccer Complex. Peyton McNabb also scored off an assist from Weissenfluh barely three minutes into the second half. Goalkeeper Brynne Qualley did not allow a goal until the 84th minute, and she finished with four saves in the victory. UMSL (7-6-2, 5-5-2 GLVC) will finish its regular season at home with games against Southern Indiana on Friday and McKendree on Sunday.

Men’s and Women’s Swimming
Junior Zara Konstapel won the 100- and 200-yard breastrstroke races and was part of the UMSL women’s winning 200-yard medley relay victory, highlighting a strong showing by the Tritons in a tri-team meet with Lewis and Illinois Wesleyan last Friday in Romeoville, Illinois. The women’s team also got first-place finishes from from Ava Boehning in the 100 freestyle, Franziska Hauptmann in the 200 backstroke and Rebecca Bechtel in the 500 freestyle, and they won the 200 freestyle relay. The men’s team took first place in both the 200 medley relay and the 200 freestyle relay, and they got individual first-place finishes from Conley Savage in the 200 butterfly, Jon Osa in the 100 freestyle and Guillem Masjuan Roca in the 100 individual medley. Both teams will return to the pool in a home dual against Truman State on Nov. 6.