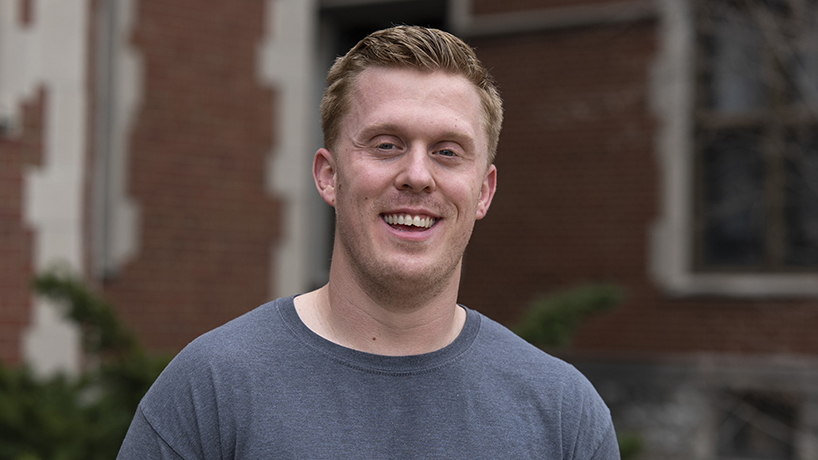 Working on as a deckhand on a National Geographic cruise ship had Steven Wolff wearing many hats.

In addition to the standard duties – such as general maintenance, loading food and passengers into the ship, standing watch and checking engines – Wolff and his peers helped the ship’s doctor and first officer handle medical situations.

“We didn’t have a hospital wing or anything like that,” he said. “Whenever we experienced emergency situations or even non-emergencies, like somebody got a cut, we had to deal with it in house. I got the opportunity to work with the medical team on board in treating minor wounds, transporting people to the nearest helipad and even helped transport the body of a local fisherman who had passed away nearby.”

Those experiences served as Wolff’s first taste of the medical field, but they wouldn’t be his last. Two incidents – the overdose of a housemate and a friend passing away after a motorcycle accident – got him thinking about becoming a nurse.

But Wolff had a problem: A stint in college after high school had left him with a 1.8 GPA.

“It feels really good to graduate,” Wolff said. “It’s been a long process, especially because of COVID.”

When Wolff decided to return to school, he chose UMSL because of its proximity to his home in nearby Ferguson, Missouri; affordable tuition; and the recommendations of friends who’d attended the nursing school.

Knowing the academic hurdles he would face getting accepted into the College of Nursing, Wolff decided he’d do whatever it took.

“I sat down with my advisor, and I said, ‘What do I need to do to get into this nursing program?’” Wolff said. “When I did get accepted to the program, I had just barely missed the GPA cut off by .02 points the semester before.

“When I got in, it felt amazing. My first goal was to get into nursing school, and I’d gotten to that point, so that was a big moment.”

Wolff forwent work and other activities to focus on academics. That has paid off and, with the exception of one B, he has earned A’s since restarting school. He attributes his success mostly to being older but also to having a distinct goal to work toward. That helped him during school, which he describes as extremely challenging.

Another thing that helped was how the knowledge he gained from prerequisites and then nursing classes all built upon each other.

“I definitely had moments that I sat there and said, ‘Everything’s coming together,’” he said. “Now I can start using this knowledge that I’ve gained over the past couple of years of prereqs, and I can put it towards one unified goal. Things seemed to start clicking.”

One example of this is assessment, which is the process of examining a patient and determining the cause of symptoms. Taking his first assessment clinical, Wolff started noticing knowledge from anatomy and pathology and the solid foundation they gave.

That class was also the first time that Wolff began working face-to-face with patients as a future medical provider.

“First of all, it was absolutely terrifying,” he said. “But it did feel like I was doing something good. I was able to start make connections with my patients, whether through deep conversations or just kind of shutting up and being there when they were crying because of something tragic, or pain or things like that. You can have a connection with somebody just by being with them and saying, ‘Hey, I’m going to be your nurse today.’”

Wolff also made connections in the classroom. Even when the pandemic necessitated that classes become virtual, he made sure to build comradery with instructors and peers by keeping his camera on and participating in class.

He attributes those behaviors to being selected for the honor of class marshal.

“I really appreciated it,” Wolff said. “It felt pretty good because I put in that extra effort.”

After walking with his class this month, Wolff will start his job on the transitional care unit at Mercy Hospital. He’d targeted and received job offers in a variety of ICUs and emergency rooms but ultimately decided a critical care step-down unit perfectly fit his career aspirations.

Wolff plans on eventually becoming a flight nurse, a specialist who provides care for critically ill patients as they are transported via plane. He’ll need three years of experience either in the ICU or ER before applying, and the transitional care unit has elements of both.

“It’s going to give me the experience to put a feeler out there and see which direction I want to go in,” Wolff said. “It will build upon the skills that UMSL has given me. This has just been a really great experience.”