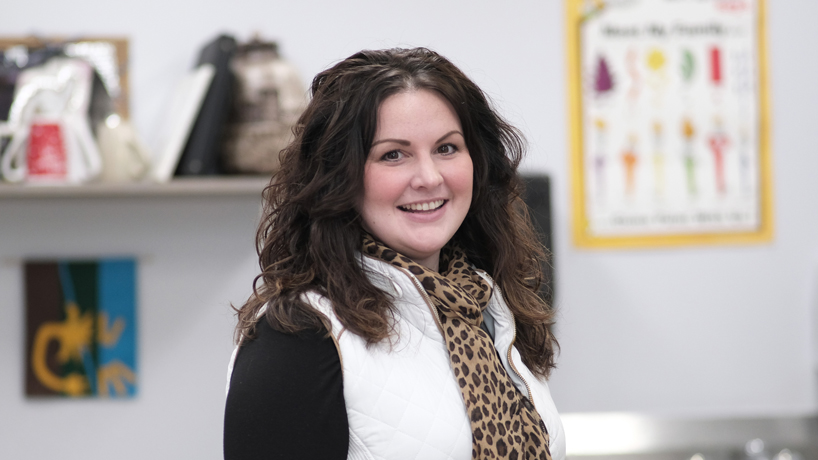 It was around this time last year that Jennifer Fisher, assistant teaching professor of art education at the University of Missouri–St. Louis, learned she had won Missouri Art Education Association Art Educator of the Year.

“I felt really very honored because there are so many colleagues of mine – I have friends in New Mexico in art ed and Iowa and all over the place – who I think are doing some really incredible work at the collegiate level or in higher education,” Fisher said of the accolade. “It definitely felt nice at this juncture in my career, to be recognized for that. It was very validating.”

Melanie Robinson, an art teacher at Cedar Springs Elementary, nominated Fisher for the state-level award last year and nominated her for the national award this year. Fisher said she appreciates Robinson’s continued support and noted that the Missouri Art Education Association encourages educators who have won at the local or state level to pursue national prizes.

When Fisher travels to New York in March to accept the award, it will be her first time as an honoree at the Higher Education Awards Ceremony. She’s attended the conference and award ceremony the past five years, presenting her work on several occasions.

“It’s a wonderful group of people,” she said. “It’s a really great collaboration of art educators.”

Fisher works to make sure her students have a firm grasp of basic pedagogy, but she also tries to instill the importance of empathy in the classroom. It’s a way to build trust with students, which makes instruction much easier and effective.

Over the past year, she’s collaborated with fellow art educators in Missouri to further that goal through a new equity, diversity and inclusion initiative. Abigail Birhanu, an UMSL art education alumna and art teacher at Wydown Middle School, initially approached Fisher about it, and she was instantly sold on the idea.

The group, which includes teachers at all education levels, has been holding monthly EDI meetings for MAEA members, as well as JEDI – justice, equity, diversity and inclusion – brunches.

“A lot of it is trying to bring resources to Missouri teachers,” Fisher said. “It’s been such a crazy, crazy year for teachers and schools in general. I think, for so many people, they just needed to reconnect and remember why some of the work we do in art education is so important. So, for many people, that’s been a point of contact and discussion and a great cathartic place to come together and have those conversations.”

Reflecting on the award, Fisher was particularly grateful for the guidance of Maggie Peeno, an adjunct art education faculty member at UMSL and former art teacher in Clayton and University City, and her late husband Larry, a former art director for the Normandy Schools Collaborative and the National Art Education Association.

Fisher said she wouldn’t be in the position to receive such a prestigious award without Maggie’s mentorship at UMSL.

“She absolutely worked her tail off to ensure my success at UMSL,” Fisher said, “and helped me in so many ways.”