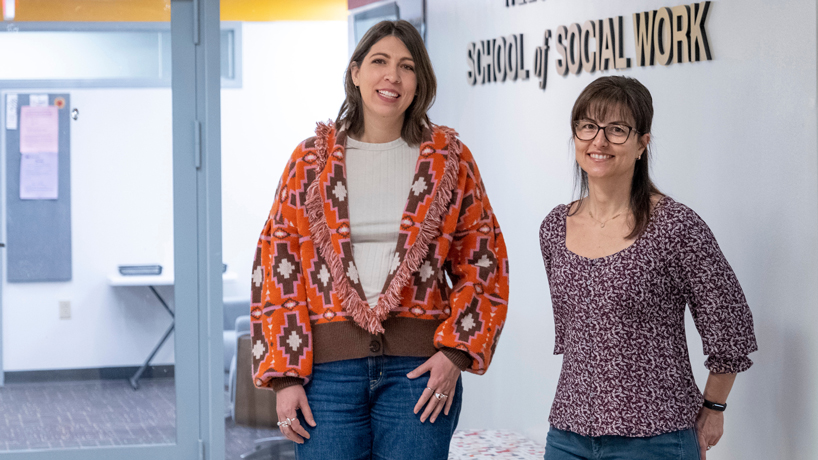 Last semester, MSW students Lili Schliesser (left) and Seda Follis interviewed St. Louis area residents about what they like about their communities and what could be improved. The project was part of Assistant Professor Michael Gearhart’s “Social Work Practice with Communities” class, and it followed up on a previous survey conducted by One West Florissant. (Photo by August Jennewein)

Lili Schliesser distinctly recalls her conversation with Pat, a St. Louis County resident who was a founding member of the St. Louis chapter of the National Association of Black Social Workers.

Schliesser was awestruck as the two spoke about community engagement and the history of St. Louis – particularly the contributions of women and Black residents.

“I wanted to be like, ‘Somebody needs to put this lady in charge,’” Schliesser said. “She has such great ideas about how to engage community and how to get people to feel invested in community. She was really knowledgeable, and we talked for an hour.”

Likewise, Seda Follis was inspired while speaking with a St. Louis resident who works at BJC HealthCare as an organization development consultant and also holds a board seat at the International Institute of St. Louis.

“She’s so connected at such a young age, so vibrant,” Follis said. “After I talked to her, I was like, ‘Wow, we need more of her in our communities.’”

“The key piece is going through engagement, talking to community members, figuring out what their vision is for their community and being able to get that down and come up with a more strategic direction for the area,” Gearhart said.

Each semester, Gearhart partners his class with a local organization working with communities in the St. Louis region. In years past, he’s rotated organizations, but last semester was the start of an ongoing relationship with One West Florissant.

In 2018, residents, business owners and local leaders in the St. Louis communities of Dellwood, Ferguson and Jennings came together at a grassroots level to form One West Florissant. They quickly created a steering committee to explore how such a community organization could make a positive impact on the areas surrounding W. Florissant Avenue in north St. Louis County.

It halted progress on the work the group had been doing. With things paused for the time being, OWF members decided to form a 501 (c)3 nonprofit community development corporation. The move put an institutional framework behind the organization and paved the way for it to receive funding. OWF also started looking toward the future.

“COVID is one of the obstacles that hit us,” said Dwayne James, urban county director of community engagement at University of Missouri Extension and member of the OWF steering committee. “There was a lot of engagement in 2018-2019 to go out and see exactly what the community members wanted and needed to see. That’s how the priority areas came up – beautification, safety and youth engagement. At that point, the steering committee was looking for a partner to continue the work and see how that’s actually going to progress.”

Through his work with MU Extension, James was familiar with Gearhart, and the two began discussing the possibility of reengaging community members in 2021. They were interested in determining if the feedback from 2018 still resonated with residents, and Gearhart offered to help continue OWF’s previous work.

Last semester’s class attracted about 40 social work students, and Gearhart tasked each student with interviewing five St. Louis area residents about their communities via phone or Zoom. Undergraduate students spoke with Dellwood, Ferguson and Jennings residents, while graduate students focused on residents in other parts of St. Louis.

Gearhart explained that casting a wide net would illustrate where the development of the W. Florissant Avenue corridor fits into the bigger picture of the St. Louis region.

Before heading out into the field, the class learned engagement methodologies and developed a high-level interview outline that focused on what people liked about their communities and what could be improved. It also touched on the priorities previously identified by OWF, but students were also free to explore other topics that came up in conversation.

Schliesser and Follis, both MSW students, spoke with people doing community facing work for churches and nonprofits respectively. Schliesser, a project coordinator for Community Partners in Prevention, is well versed in community outreach and was excited to conduct her interviews.

“I know a lot of students were nervous because it feels like cold calling almost, but I get energized by connecting with people and community,” she said. “I knew that I would glean a lot from the process, and I think it’s really good to do things that make us uncomfortable.”

Follis was apprehensive at first because she was unsure how familiar people were with OWF. However, once she started conversing, she found people were more than willing to share their opinions with her.

“It was nerve racking, but once we started the process, I was super energized the more connections I made,” she said. “When we were describing what One West Florissant is doing, it clicked with people. It was very rewarding how people that I spoke to were wanting to know more about it and share their perspectives.”

Schliesser and Follis identified similar themes in their interviews.

The people they spoke to wanted to feel safe at night and feel like their neighbors care about their property. The respondents also noted that community and government organizations can reinforce a feeling of investment by supporting initiatives to improve residents’ everyday lives.

“A big thing I heard a lot was the idea of needing resources to be in one’s own community so you don’t have to leave your immediate community to access the things that you need on a daily basis,” Schliesser said.

This semester, Gearhart’s students are continuing to work on community engagement with OWF, and he anticipates the arrangement continuing for the foreseeable future.

James added that the organization can now start putting some of the information the social work students collected to use. That could look like a number of things, from pursuing a project to put up roadside banners identifying the W. Florissant Avenue corridor to funding business façade improvements. James said it’s time to identify what’s possible and act.

Schliesser and Follis thoroughly enjoyed the hands-on experience. Follis said she appreciated the opportunity to work with the community because it stuck with her and made a far greater impression than a case study or assigned reading. Schliesser concurred and said not only is the work sticking with her, she’s already putting it to good use.

“I run a community coalition, so this work was completely relevant to the work I’m already doing,” she said. “I have to determine what the priorities of my community are, what the readiness level for change is, and I have to have these conversations. I had never been taught how to do these things. This was my first time really being given a methodology for that.

“It was incredibly practical, and I’m actually in data collection in my job. I’m putting it to use right now. I’m going out into the field and doing this work all over again and using the methods and ideas that Dr. Gearhart taught us.”