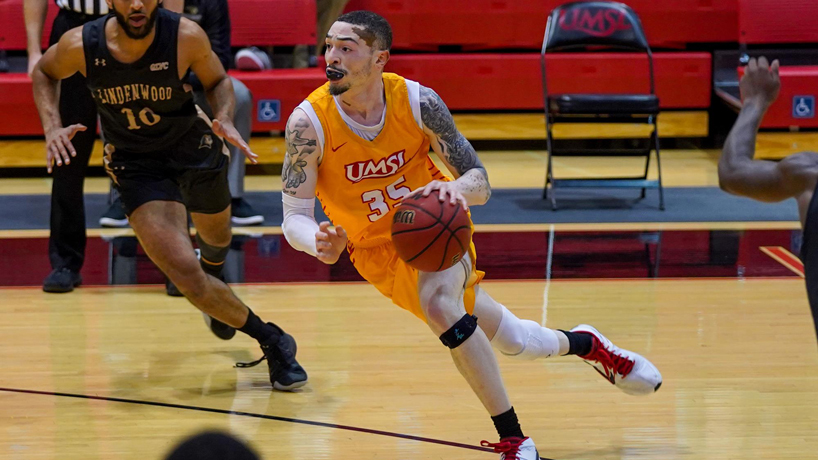 Men’s Basketball
Senior swingman Jose Grubbs scored 22 points to lead three players in double figures as UMSL beat Lindenwood 92-75 on Saturday at the Mark Twain Athletic Center. The victory was the 150th for Coach Bob Sundvold during his UMSL tenure, which began in 2013. Senior forward Marty Jackson added 19 points and seven rebounds, and redshirt sophomore guard Isaiah Fuller added a season-high 17 points off the bench. The Tritons held Lindenwood to 35.7% shooting in the first half while building a 48-32 lead. UMSL (18-6, 12-5 Great Lakes Valley Conference) wraps up its regular-season schedule at home this week with games against Southern Indiana on Thursday and McKendree on Saturday.

Women’s Basketball
The 18th-ranked Tritons stumbled on the road at Lewis on Tuesday, losing 70-60 and snapping their nine-game winning streak, but they bounced back quickly on Saturday when they beat Lindenwood 67-56 at the Mark Twain Athletic Center, giving Coach Katie Vaughn‘s team 20 wins for the first time since the 2017-18 season. UMSL watched Lewis go 9 for 18 from 3-point range in Tuesday’s defeat but were sharper defensively against the Lions. Senior forward Alex LaPorta led four players in double figures with 14 points and added 11 rebounds. Faye Meissner and Kiara Stewart added 13 points each, and Stewart also had eight rebounds. Freshman guard Jalysa Stokes had 11 points off the bench. UMSL (20-3, 16-2 GLVC) will play host to Southern Indiana on Tuesday and McKendree on Saturday in its final two games for the GLVC Tournament.

Women’s Tennis
UMSL lost the doubles point but swept six singles matches as it opened its spring schedule with a 6-1 victory over McKendree in O’Fallon, Illinois. Odette Beagrie, Leticia Lunge, Maja Lietzau, Tara Erler and Clara Lopez Bueno all won their singles matches in straight sets, and Anna Domingo pulled out a three-set victory 6-0, 5-7, 6-4. The Tritons will face Saint Louis University in a doubleheader today in St. Clair, Missouri, with the first match at 11:30 a.m. and the second at 2:30 p.m. They are also scheduled to play a dual meet at Harding University on Sunday in Searcy, Arkansas.

Men’s Tennis
The Tritons dropped its spring opener against McKendree 5-2 at the St. Clair Tennis Center in O’Fallon, Illinois. Karl Heinrichs and Raphael Kendl picked up the only two points for UMSL with Heinrichs winning the No. 4 singles match 6-4, 7-6 and Kerndl pulling out a 6-4, 1-6, 10-8 at No. 5 singles. The Tritons will face Southern Indiana on Friday in Evansville, Indiana.

Softball
Winter weather prevented the Emporia State Classic from being played as scheduled over the weekend, so instead of traveling to Emporia, Kansas, UMSL headed to Topeka, Kansas, for two days of doubleheaders. The Tritons dropped a pair of games against Washburn by scores of 8-1 and 10-6 on Sunday, falling to 1-3 on the young season. Graduate transfer Megan Brown hit her first home run and drove in four runs in the Game 2 loss. UMSL  was set to take on Emporia State in a doubleheader on Monday. The Tritons are slated to be back in Topeka for six more games next weekend.