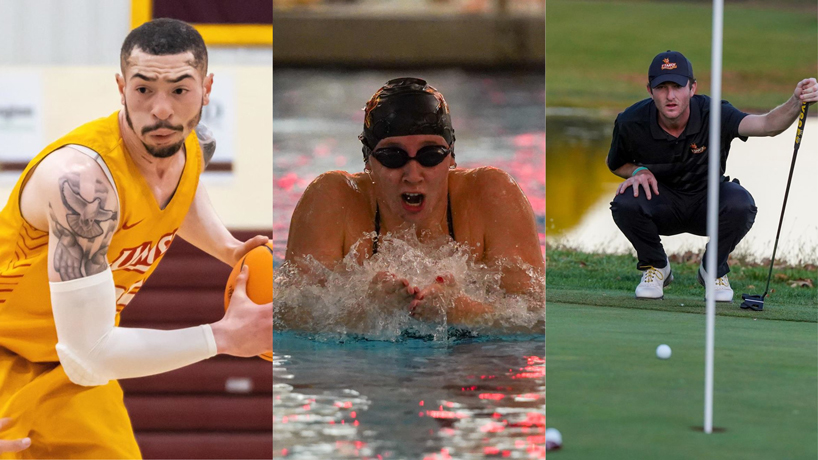 In a banner week for the UMSL Tritons, Jose Grubbs helped the men’s basketball team advance to the NCAA Division II Midwest Region final before falling to Hillsdale, swimmer Zara Konstapel claimed All-America honors in the 100-yard breaststroke and Reilly Ahearn led the men’s golf team to a title in the Las Vegas Desert Classic.

Men’s Basketball
The University of Missouri–St. Louis men’s basketball team wasn’t content to just to be playing in the NCAA Division Tournament for the first time since 1988. The fifth-seeded Tritons put together a run in the Midwest Region, beating Great Lakes Valley Conference rival Truman State 73-68 in Friday’s opening round and then routing top-seeded tournament host Walsh 87-58 on Saturday to advance to Monday night’s regional final. But Coach Bob Sundvold‘s team fell short of the program’s first Elite Eight appearance in 50 years when it lost to third-seeded Hillsdale 73-63 in North Canton, Ohio.

Sundvold was still grateful for the ride, which included the program’s second NCAA Tournament berth in three years after a 32-year hiatus and the program’s first postseason wins since 1988.

“Being a part of a team that has done stuff that we really haven’t done at UMSL, these seniors have really got a great legacy,” Sundvold said of a senior class that includes Steve Webb, Shane Wissink, Yaakema Rose Jr., Kellen King, Marquis Collins and Jose Grubbs. “They established some things both on and off the court on campus.”

The Tritons just didn’t quite have enough on Monday as they struggled to contain the Chargers on the defensive end, allowing Hillsdale to shoot 54 percent from the field and 47 percent from 3-point range. Rose scored 18 points, and UMSL got 12 points from Webb and 11 each from Wissink and junior forward Marty Jackson. But the Tritons couldn’t match the Chargers’ perimeter shooting, making only 4 of 13 3-pointers and missing their last four while trying to claw back in the last eight minutes.

UMSL had shot 17 for 36 from beyond the arc in its victories against Truman State and Walsh. Wissink made three 3-pointers and led six players in double figures against Truman State as UMSL snapped a five-game losing streak against the Bulldogs that dated to 2019. Senior swingman Jose Grubbs had 19 points as the Tritons got another balanced scoring game and made 11 of 24 3-pointers against Walsh. Four players finished in double figures.

UMSL (26-7) came one win shy of matching the school record with 13 straight victories and making the regional final for the second time in program history. The 1971-72 team hosted and won the Midwest Region title before falling to Roanoke in the Elite Eight.

Women’s Basketball
Cold shooting in the second and third quarters proved too much for the sixth-seeded Tritons to overcome in a 65-49 loss to GLVC foe Drury in their NCAA Division II Tournament opener on Friday in Ashland, Ohio. UMSL made only 28 percent of its shots in the second and third periods as Drury outscored them 36-18 and opened up a 50-31 lead. Senior forwards Alex LaPorta and Kiara Stewart combined for 26 points and 21 rebounds in the loss, but it was not enough to avoid defeat. Coach Katie Vaughn‘s team still accomplished much during the season, setting a program record with 23 victories, winning the GLVC Central Division and making the program’s first NCAA Tournament appearance since 2014.

Men’s Golf
UMSL secured its second team victory of the 2021-22 season by claiming the title in its own Las Vegas Desert Classic, which it hosted March 6-8 at The Legacy Golf Club. The Tritons posted a 54-hole score of 873 and edged No. 20 Florida Southern by one stroke. The 19-team field featured seven teams ranked in the latest Bushnell/Golfweek DII Coaches’ Poll. Senior Reilly Ahearn paced UMSL with a season-best score of 217 (71-73-73) to tie for seventh place in the 54-hole tournament. Freshman Ian McCrary (tied for 10th), senior Joel Sylven (tied for 18th) and junior Juan Antonio Padilla (tied for 20th) joined him in the top 20 individually. UMSL will next compete in the Findlay Spring Invite March 28-29 in Lexington, Kentucky.

Women’s Golf
The Tritons sat in seventh-place position through one round of the Emerald Coast Classic in Destin, Florida, after shooting a combined score of 307. The Tritons trailed leader Nova Southeastern by 17 shots in the 17-team field. Sophomore Linn Thornqvist and senior Manon Labeur were tied for 14th and 18th, respectively, after shooting rounds of 74 and 75. The tournament continued Monday and will conclude on Tuesday.

Softball
UMSL opened GLVC play by sweeping a double-header Sunday on the road against Lewis in Rosemont, Illinois. The Tritons (13-8, 2-0 GLVC) won Game 1 6-4 and followed it up with a 7-5 victory in Game 2. Maddie Snemis, McKenzie Lamos and Megan Brown each had three hits in the opener, and Brown and Corinne Dailey combined for four RBI. Dailey had three hits and drove in three runs in the second game. UMSL plays another doubleheader at Illinois Springfield on Monday and will play host to Truman State and Quincy in doubleheaders Saturday and Sunday, respectively.