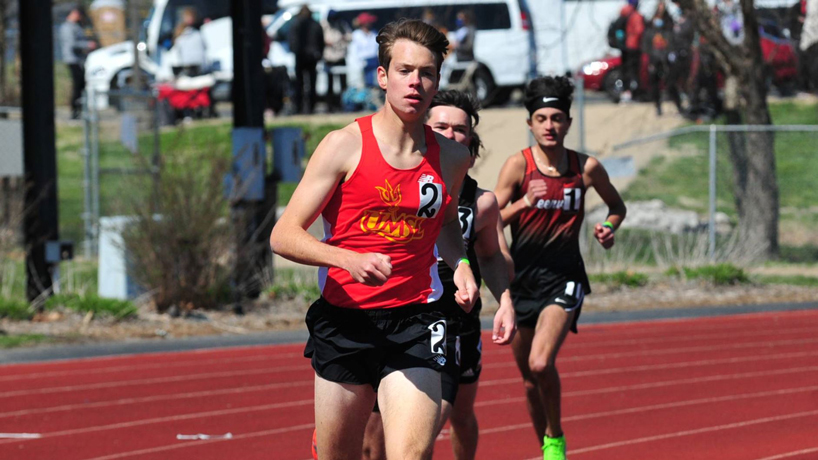 Men’s and Women’s Track
UMSL sophomores Benjamin VandenBrink and Jacob Warner each raced to victories Saturday in the Central Methodist University Open in Fayette, Missouri. VandenBrink won the men’s 3,000-meter race in a time of 8 minutes, and his teammate Matthias Shelp placed eighth in the same event in 9:19.57. Warner, meanwhile, won the men’s 1,500-meter race in a time of 4:03.34. The women’s team also had some strong showings with Kayley Heeter, Lily Wagemann and Peyton Brueck each placing in the top five in the women’s 3,000-meter run. Heeter finished second in 11:29.62, just ahead of third-place Wagemann (11:30.02), and Brueck was fifth (11:45.41). Haeley Johnson placed sixth in the long jump with a best mark of 4.95 meters, and Kennedy Moore finished seventh in the women’s 800 meters race with a time of 2:36.47. The Tritons will travel to Starkville, Mississippi, the home of Mississippi State University, next Friday and Saturday to race in the Al Schmidt Bulldog Relays.

Women’s Golf
Rain washed out Tuesday’s final round of the Emerald Coast Classic, leaving the Tritons to settle sixth place in the 17-team field with a combined team score of 600 in Destin, Florida. Freshman Tove Brunell led UMSL by finishing in a tie for 14th place individually after carding rounds of 76 and 73. Sophomore Momo Kikuckhi was one shot back in a tie for 17th after a second-round 68. Sophomore Linn Thornqvist and senior Manon Labeur each tied for 29th with two-rounds totals of 152. The Tritons tee off Monday in the Findlay Spring Invitational in Lexington, Kentucky.

Softball
UMSL swept doubleheaders against Illinois Springfield and Truman State on Monday and Saturday, respectively, before splitting with Quincy on Sunday to improve to 7-1 in Great Lakes Valley Conference play. The Tritons beat Illinois Springfield 9-4 in back-to-back road games and outscored Truman State 15-5 combined in two wins on Saturday. Quincy proved a tougher challenge, taking the Sunday’s first game 2-1 before UMSL pulled out a 1-0 victory in the finale. Annie Scaramuzzi improved to 8-1 after holding Quincy to four hits in seven shutout innings. First baseman Morgan Barnoski singled in Scaramuzzi for the winning run in the bottom of the seventh inning. Megan Brown and Riley Schultz each drove in seven runs on the week for the Tritons. UMSL (18-9, 7-1) next plays doubleheaders against Rockhurst and William Jewell on the road on Saturday and Sunday, respectively.

Baseball
The Tritons were swept in a pair of doubleheaders against Missouri S&T on Saturday and Sunday in Rolla, Missouri. UMSL banged out 30 runs in the four games but struggled to control the Miners’ bats. Senior rightfielder Clayton Stephens tripled in two runs and scored on a wild pitch to give UMSL a 7-2 lead in the fifth inning of Sunday’s finale, but Missouri S&T came back to win 8-7. The Tritons (1-11) open a four-game set at home against William Jewell on Friday.

Women’s Tennis
UMSL picked up its second victory over the season by beating Lindenwood 4-3 in a dual meet on Thursday in St. Charles, Missouri. Odette Beagrie, Anna Domingo and Maja Lietzau each won singles matches for the Tritons, and Beagrie and Domingo anchored winning double teams. UMSL will be back in action on Friday against Illinois Springfield and faces Southern Indiana on Sunday. Both dual meets are at UMSL.

Men’s Tennis
The Tritons fell 5-2 against Lindenwood in a dual meet Thursday in St. Charles, Missouri. Junior Jose Mayorga pulled out a three-setter 6-2, 4-6, 6-1 at No. 3 singles and senior Karl Heinrichs won in straight sets 6-4, 6-2 at No. 5 singles to give UMSL its two points. The Tritons will face Illinois Springfield at home on Friday.