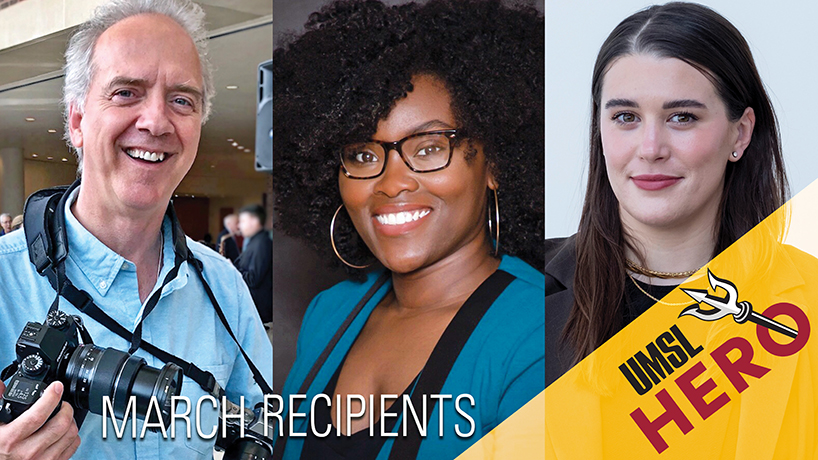 This month’s honorees are August Jennewein, campus photographer in University Marketing and Communications; Chelsea Nollau, interim director of Executive Events; and ShaQuina White, academic advisor in the College of Education.

A couple photos displayed on the wall at his cousin’s Easter luncheon where a few UMSL employees were in attendance led Jennewein to the university.

“They saw photos of mine on the wall and asked if she could give them my name,” Jennewein said. “My cousin said, ‘Oh, he’s in the next room having a ham sandwich.’”

The subsequent interaction led to freelance work for Jennewein and eventually a position as campus photographer. Joining the university all seemed to fit together for Jennewein, who calls it “almost a spiritual thing.”

A year before, almost to the day, his father had passed away after months in hospice. Jennewein, who’d been working in the story department at Paramount Pictures and trying to become a screenwriter, had been thinking about returning to Los Angeles.

“It feels in some way that my dad opened the door,” he said. “When I got offered the full-time job, it was like, ‘Here’s this dream job that I hadn’t even dreamed of yet.’ Getting paid to do photography and work at a university. It’s this great world where so much life and energy and creativity come together. I’ve enjoyed playing my part.”

In the 16 subsequent years, Jennewein has captured the images of countless UMSL community members. He especially enjoys meeting students, learning about their unique stories and helping share them.

Working on UMSL Magazine has been another highlight.

“You get total freedom for your stories,” he said. “You don’t have to worry about the dimensions of your pictures because they don’t have to fit on to the web. They can be anything. That’s always fun.”

UMSL Magazine Editor Jessica Rogen noted his devotion to his photo assignments and making the best photograph for the magazine and beyond in her nomination of Jennewein.

“He’s one of the hardest workers I’ve ever met,” Rogen wrote. “For example, during the Alumni 5K, Augie brought his bike to campus so he could quickly position himself along the course for multiple angles. The amazing results captured the fun spirit of that day, and we ended up using one for the inside cover of the magazine. There are so many Augie stories like this.”

Being a Hero Award recipient came as a surprise for Jennewein.

“I appreciate it,” he said. “It’s a good recognition. Actually, my mom and my siblings really enjoyed it even more because they see it in the eyes of how we present it, which is really cool.”

Know that every time Nollau attends an event, she’s analyzing every single detail, thinking about what she can use and what she might have done differently.

“If somebody approaches me with an idea for an event, that’s a great opportunity to look at other events and be like, ‘What did they do that was great or really engaging or cool, and kind of borrow that,’” she said. “But I’m always quick to remember that I don’t know the full story behind their event. I know the work that goes into it, so I respect what they’ve done, regardless of what I might have done differently.”

Nollau, who currently serves as the interim director of Executive Events, got her start in event planning while working in development at a nonprofit. Over time, she came to realize she didn’t enjoy the fundraising aspect but loved the relationship building and engagement that came with events, as well as seeing them out, start to finish.

She began working in UMSL Executive Events in 2018 and quickly came to enjoy working at a university, knowing that everything was in service of educating students who would go on to have an impact on the community after graduation. It’s not surprising, then, that her favorite event tends to be commencement.

“It’s the culmination of all we do here,” Nollau said. “I like getting to see the students, who I don’t often get to interact with a lot. Commencements are always really fun.”

Nollau’s impeccable execution of fall commencement inspired Phil Donato, executive director of the UMSL Alumni Association, to nominate her for the Hero Award.

“Things ran so smoothly that it is almost incomprehensible that one person coordinated everything,” he wrote in his nomination. “She is an extremely organized person who works very hard to get the job done, whatever it takes, for however long it takes. Her attention to detail is unmatched by anyone I know, and her ability to work under pressure to solve problems on the fly are what define her. On top of all of this, she is a wonderful human being.”

For Nollau, learning she had been awarded the Hero Award was a total shock.

“I was really surprised by it,” she said. “Then, it was probably even nicer to then get another email that the chancellor cc’d me on, letting me know that Phil had nominated me. That was what was really nice, knowing it had come from somebody that I respect that much.”

As both an academic advisor and a doctoral student in the College of Education, White knows what it means to wear many hats and juggle many responsibilities.

“I’m very student focused and student driven,” she said. “I love advocating for them. I also love helping them – not necessarily pushing them – but helping them see that they are capable of more than what they think they are.”

White started working as an academic advisor in 2018 after earning a master’s degree in counseling from UMSL in 2017 following a prior career in fashion merchandising. She helps undergraduate education students who are pursuing teacher certification pick courses and plan their academic futures.

That’s the job description, but White is known for always doing more. Ellen Meadows, director of advising for the College of Education, singled out White for the Hero Award for this reason.

White serves as a resource for students with questions, gives advice, checks in with students frequently, connects people to financial aid, helps them navigate the email system, how to find tutoring and how to find resources – anything from the Veterans Center to Disability Access Services to Counseling Services.

One of her favorite things about the job is getting to see students from when they enter college to commencement.

“If I am following through with a student and I see them graduate, that’s great,” she said. “That was a relationship that I’ve built from conception all the way up to degree completion. That is what I look forward to because I know that I’ve provided them with the resources that they need to continue their education here and to get their degree.”

Much like the students she helps through her advisor role, White aspires to take what she’s learning in her Doctor of Education in Educational Practice and in her job and combine that with her passion for counseling, therapy and mental health down the road.

As a first-year doctoral student, she doesn’t know what that looks like yet but she does have an idea of where she’ll be.

“I want to be in higher ed,” White said. “Academic advising is definitely a great starting point.”

Each recipient of the Hero Award will receive a lapel pin in recognition of their contributions. To nominate staff or faculty members for the UMSL Hero Award, visit https://www.umsl.edu/chancellor/heroes/index.html.