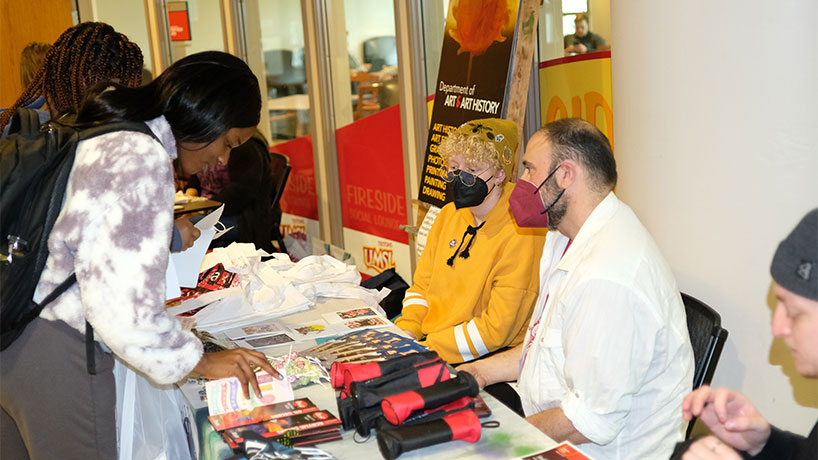 Nearly 30 student organizations gathered last week in the Millennium Student Center for the Spring Involvement Expo at the University of Missouri–St. Louis.

Student organizations hoped to attract new members, and students who attended wished to identify organizations that aligned with their interests, beliefs and social needs. 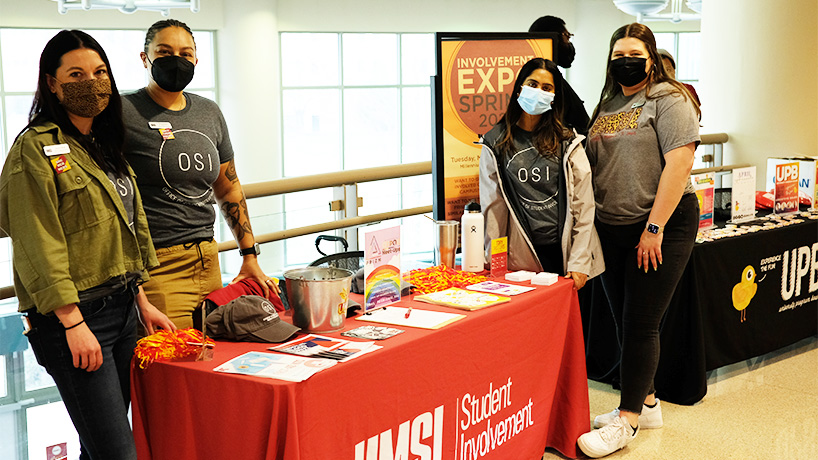 The Office of Student Involvement sponsored the event.

The expo had been postponed because of rising cases of COVID-19 throughout the region earlier this year. The students who attended the in-person event came in search of connectedness and community. There were plenty of choices as UMSL student organizations are as diverse as the UMSL student body.

The Muslim Students Association, which has about 23 members, serves as a space for Muslim students to meet each other and share in issues and advocacy related to the community. Sophomore Afina Fayez, the organization’s secretary, shared the group’s overarching goal. 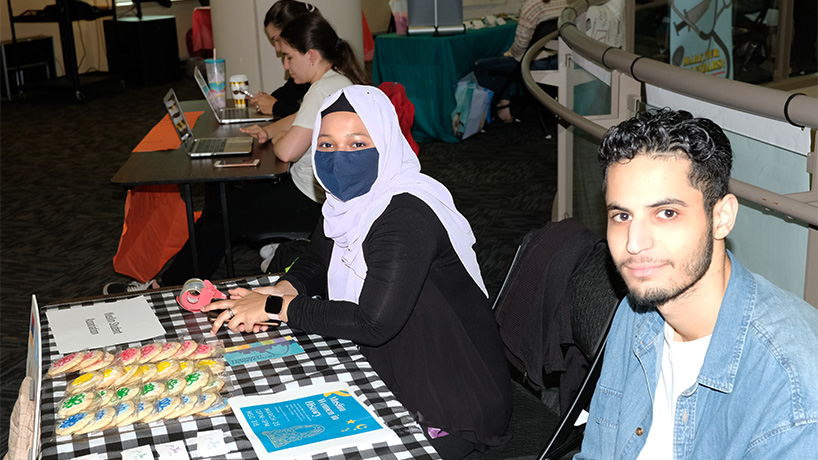 “We’re working towards eliminating any type of stereotypes people may have about Muslims on campus,” Fayez said. “Just letting people know what Islam is about – because a lot of people have misconceptions about it. We’re advocating for peace where everyone can come together and coexist.”

The physics major also mentioned initiatives on which the group has worked, including establishing prayer rooms on campus as well as future proposals that include having halal food on campus.

The Secular Student Alliance aims to create a space for students who don’t find community within religion and religious settings. 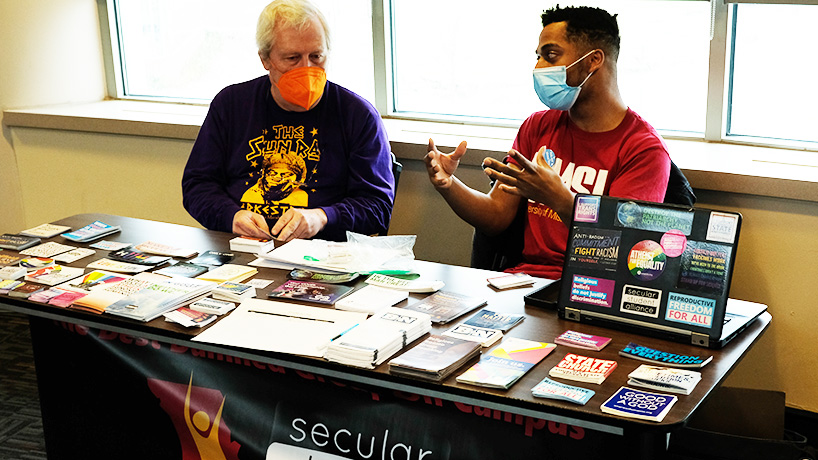 Malik Lendell (at right) speaks with another member of the Secular Student Alliance.

“Whether you identify as an atheist, agnostic,” member Malik Lendell said, “this is the group for you to form community and partake in some events and discuss ‘how does nonreligion impact your daily life and examine these beliefs philosophically.'”

With community being a major theme at the event, other organizations such as Artists Anonymous, were eager to share their love of art and its social impact with others.

In addition to supporting students and their artistic endeavors, Bob Madden, Artists Anonymous president and studio art major, said another part of the groups’ mission is to “connect art and artists to society.”

The sophomore was attracted to joining the group, the only art club on campus, because of their link to working in the community.

“The idea is that society works better when art is involved,” Madden said. “Art makes it a little bit more colorful and a little bit more fun. I switched my major from art education to focus on art and community service. I’m a studio art major but am going to focus on building socioeconomic connections.”

Though finding connection was a sentiment echoed throughout the expo, some students were looking for organizations that also served practical needs. 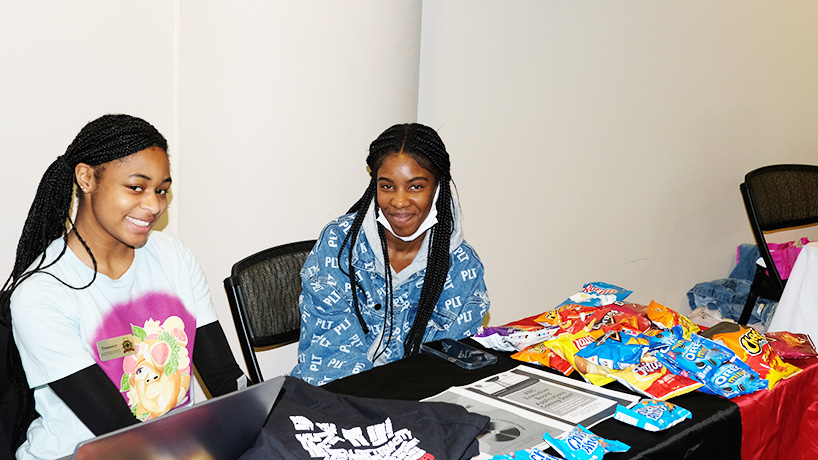 Krissy Henderson (at left), treasurer of the Association of Black Collegians, sits with Jayla McDonald, vice president of the organization.

An international student, Fahmiedul Islam Jity, who is a freshman studying international relations, was hoping to locate a student organization that would not only be a social network but also an avenue to enhance his English-speaking and communication skills. As a nonnative speaker, he believed joining a student organization would help him practice and improve his communicative abilities.

For many students, college is a place and time for self-discovery and establishing an identity, even if that identity continues to evolve after school. Participating in student organizations can provide a sense of community, which therefore includes the acceptance of one’s identity. 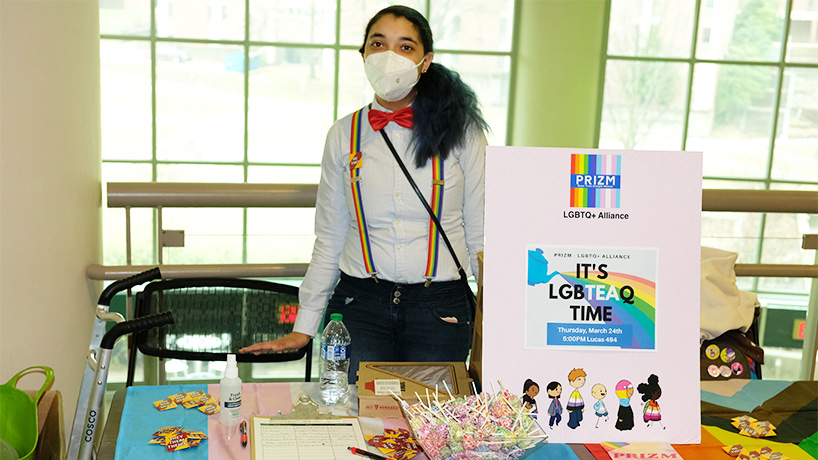 The student organization PRIZM, UMSL’s Queer Trans Straight Alliance, works to achieve that for its members and allies.

“The purpose of PRIZM is to host a safe space for queer students and our allies,” said Kai Perry, a senior and vice president of the organization, “so we can safely be ourselves without any judgment.”