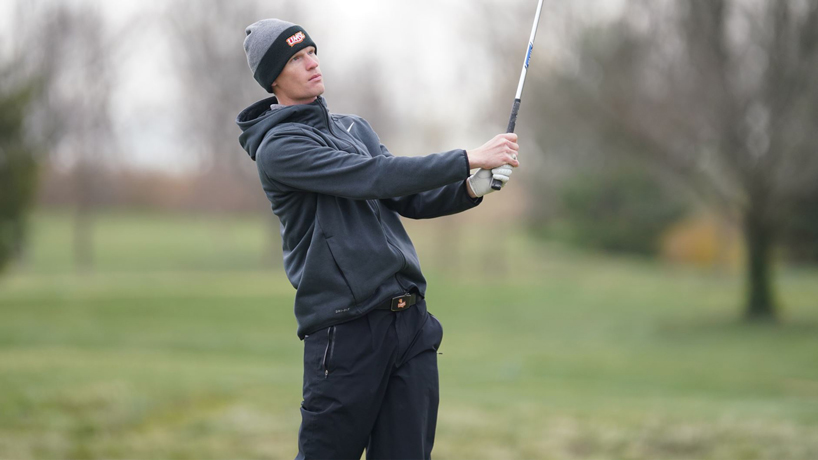 Senior golfer Joel Sylven posted a school-record score of 206 at the Findlay Spring Invite to capture his second individual title of the season and fifth of his career.

Men’s Golf
Joel Sylven captured his second individual title of the season, claiming medalist honors at last week’s Findlay Spring Invite in Lexington, Kentucky. The UMSL senior turned in a school-record score of 206 with rounds of 67, 71 and 68 in the 54-hole tournament, finishing two shots better than Grand Valley State’s Charles Delong. He now has five individuals titles in his career, second most in school history. His victory helped the Tritons to a third-place finish in the 19-team field. UMSL shot a season-best 864 while finishing in the top three for the sixth time. The 25th-ranked Tritons will compete at the Argonaut Invitational on Monday and Tuesday in Pensacola, Florida.

Softball
Junior Annie Scaramuzzi punctuated a strong weekend at home by tossing her first career non-hitter on Saturday afternoon to complete a sweep of Southwest Baptist. UMSL beat Southwest Baptist 5-4 in eight innings in the opener before an 11-0 shutout in the second game. Scaramuzzi walked two while striking out six as she notched the Tritons’ first no-hitter since Carly Klingery pitched one against McKendree on May 10, 2018, in the NCAA Midwest Regional. The doubleheader sweep came a day after UMSL split two games with visiting Drury and snapped the Panthers’ 11-game winning streak. Graduate student Megan Brown recorded a pair of two-run homers, finishing 2 for 2 at the plate with four RBI while also drawing two walks, to lead the Tritons in the 7-4 victory  in the second game of Saturday’s doubleheader. UMSL (22-13, 11-5 Great Lakes Valley Conference) will play a doubleheader at Maryville on Saturday and a doubleheader at Missouri S&T on Sunday.

Baseball
UMSL more than doubled its season win total by taking three out of four from Southwest Baptist over the weekend in Bolivar, Missouri. The Tritons (5-17, 4-4 GLVC) beat the Bearcats 8-2 in Friday’s opener, lost the first game of Saturday’s doubleheader 13-5 but rebounded to take the final two games, winning 4-3 on Saturday and 8-6 on Sunday. Sophomore catcher Kameron Laskowski batted .500 with five hits and three RBI in the series. Junior Nick Torres pitched eight innings, allowing two runs and striking out four to win the opener. Adam Rose struck out nine and Jack Rhodes struck out eight in the other two UMSL victories. UMSL opens a four-game series at McKendree at 2 p.m. Friday in Lebanon, Illinois.

Women’s Tennis
The Tritons split a pair of dual meets, beating Maryville 4-3 on Tuesday before losing to Northwest Missouri State 7-0 on Saturday. Senior Odette Beagrie led the way in the win over Maryville, taking the No. 1 singles match 6-4, 6-1 and also teaming with Leticia Lunge to win the No. 1 doubles match 6-2. Lunge and Tara Erler also won singles matches against the Saints as UMSL ran its winning streak to four. But the streak came to an end against the Bearcats. The Tritons (5-5) will travel to Quincy on Friday and Truman State on Saturday.

Men’s Track
Sophomore Benjamin VandenBrink was the top UMSL finisher at the WashU Distance Carnival, clocking a time of 15 minutes 3.58 seconds in the 5,000-meter run to place 36th out of 171 finishers last Friday. The Tritons travel to Lebanon, Illinois, on Saturday to run in the Bearcat Classic.