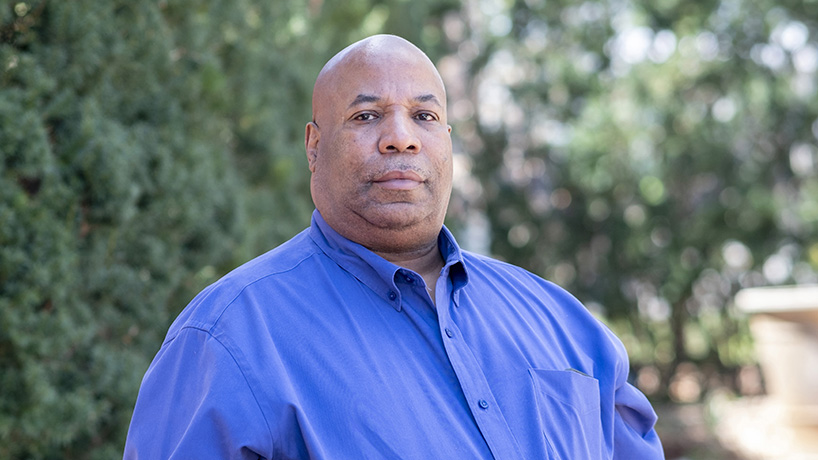 Bill Mays, a member of Safer Homes Collaborative, works to raise awareness among gun owners and sellers about how to store firearms more safely.

Gun ownership in the Black community is on the rise, and so is suicide among Black males between 15-24 years old.

There could be an unfortunate link because more homes have guns, and the increased access to guns can impact the rates of suicide by firearms.

The Safer Homes Collaborative, a suicide prevention education program led by the Missouri Institute of Mental Health at the University of Missouri–St. Louis, aims to educate gun owners and sellers about the potential hazards of having guns in the home or other accessible areas. The program works to build awareness of keeping guns stored safely, particularly in the presence of those who may be in crisis, and recently, a focus on the Black community has been necessary.

Bill Mays, a former gun owner, firearms trainer and member of the collaborative, said there is now more access to guns than ever before.

“It has increased tremendously,” Mays said. “I mean you can get a gun now from anywhere. Our gun culture has exploded.”

In Missouri there are virtually no barriers to obtaining and carrying a firearm. There is no waiting period when purchasing a gun. There’s no requirement to obtain a permit for open carry. License and registration are also not necessary.

Mays said many of the African Americans he has trained are unaware of how easy it has become to get a gun.

The desire for self-protection accounts for much of the increase, but statistics suggest it could also be putting Black men in particular at greater risk. According to a study by the Congressional Black Caucus in 2019, “suicide ranked as the third-leading cause of death in Black men ages 15-24.” The Black male suicide rate is higher in Missouri compared to the national rate.

The increase in Black male suicide is due to a variety of psychological, social and socioeconomic factors.

Mental illness such as depression and anxiety – often misdiagnosed or underdiagnosed in Black males – plays a big part in Black male suicide as well. One of the factors that leads to depression and anxiety is racial discrimination that can negatively impact socioeconomic mobility. Other elements include bullying, poverty and isolation, which increased exponentially during the height of the COVID-19 pandemic. Dysfunctional family environments, exposure to suicide and access to lethal means are also risk factors.

The tragedy of suicide by firearm in the Black community, Mays believes, will continue as guns remain ubiquitous and many still struggle with mental illness.

Mays has not only worked as a crisis counselor but also had his own experience with suicide. He knows of the mental and emotional turmoil one experiences when feeling suicidal.

“I lost my job and was in poverty at that time,” Mays said. “Just having a bad time and was there by myself. And I was like, ‘Man, forget this.’ You don’t have to be mentally ill to be in that state, but you can be depressed. Depression can take you there.”

But when Mays went to get his firearm, it wasn’t there. He’d pawned it two days earlier for extra money. Then he got a call from his daughter who talked with him and intervened.

He was lucky, as 90% of those who attempt suicide with a firearm die. There isn’t much time between deciding to take one’s life and taking action.

“Between 25% and 75% of suicide attempt survivors said it was anywhere from five minutes to an hour from the time that they made the decision to attempt suicide,” said Katie Ellison, project director of Safer Homes and attempt suicide survivor. “So, that window is really, really brief. For adults who are in that mindset, they are not always problem solving with their best skills, their best tools available to them. They can be looking for that immediate relief to the psychological pain they’re experiencing.”

So, unless there are deterrents, suicide by firearm is likely to result in death.

“Secure them so that they’re unloaded and locked, and store ammunition separately,” Ellison said. “Make certain the firearms are put away in some type of a locked storage safety device, or have gun locks or trigger locks on them.”

Another part of preventing suicide with a firearm that is being stored in the house or other accessible areas is being able to recognize the signs of crisis of those in the home. Some signs are easier to detect, such as changes in behavior, and some are not.

“In general most people do communicate their intent,” Ellison said. “But sometimes it’s so covert that the messages are masked, or they’re confusing. Sometimes they’re blatant and outright.”

Though there are other obvious means of suicide that Safer Homes discusses, its focal point is building awareness of guns.

Firearms are the most lethal method by which people die in the United States and Missouri. Attempting suicide with a firearm greatly decreases the opportunity for intervention to prevent death.

The preemptive messaging is crucial, particularly for those at a higher risk of suicide, including young Black men.

“We want to get this message out to as many people as possible,” Ellison said, “before they’re in crisis.”

The National Suicide Prevention Lifeline is a hotline for individuals in crisis or for those looking to help someone else. To speak with a certified listener, call 1-800-273-8255.

Crisis Text Line is a texting service for emotional crisis support. To speak with a trained listener, text HELLO to 741741. It is free, available 24/7, and confidential.