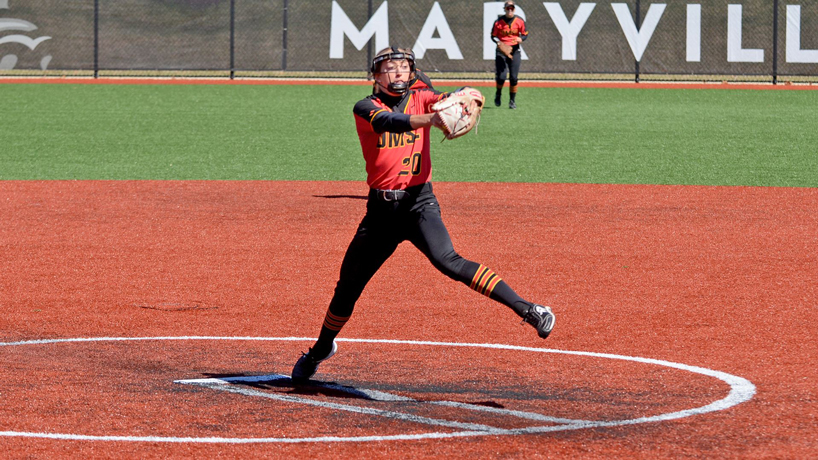 Senior Mimi Bradley became the second UMSL pitcher in as many weeks to toss a no-hitter, holding Maryville without a hit and striking out six in a 2-0 victory on Saturday.

Softball
Senior Mimi Bradley tossed her first career no-hitter while striking out six on Saturday in a 2-0 victory against Maryville to set the tone for a dominant weekend by UMSL. The Tritons also won 2-0 in the second game of their doubleheader, and they outscored Missouri S&T 23-4 in another doubleheader sweep on Sunday in Rolla, Missouri, to run their winning streak to seven games. Bradley’s no-hitter was the second in as many weeks for UMSL after Annie Scaramuzzi tossed a no-hitter last weekend against Southwest Baptist. Megan Brown drove in three runs to back Bradley (7-2) to another win, 12-4 against the Miners. Catcher Riley Schultz homered and drove in four runs in an 11-0 victory to complete the sweep. UMSL (26-13, 15-5 Great Lakes Valley Conference) travels to Indianapolis for a doubleheader on Saturday.

Baseball
The Tritons split a four-game series against McKendree in Lebanon, Illinois, winning the first game 10-5 on Friday and taking Game 3 16-1 on Saturday. They also lost games by the score of 10-2 and 16-15 on Saturday and Sunday, respectively. Carson Steiner snapped a 3-3 tie with a three-run, pinch-hit home run in the eighth inning of the opener. UMSL scored seven times over the final two innings. Adam Rose held McKendree to one run on six hits in seven innings to pick up the victory on Saturday, and he got plenty of support from his offense, led by right fielder Clayton Stephens, who went 3 for 4 with a home run and four RBI. Stephens also homered and drove in four runs Sunday as the Tritons attempted to rally from 15-3 deficit but came up a run short. UMSL (7-19, 6-6 GLVC) will play host to Illinois Springfield on Tuesday and begins a four-game series at home against Lindenwood on Thursday. The two teams will play a doubleheader on Friday.

Women’s Golf
UMSL tied for fifth out of 18 teams at the Newman Spring Invite, which wrapped up Tuesday in Newton, Kansas. Freshman Tove Brunell was the Tritons’ top finisher, notching back-to-back rounds of 75 in the 36-hole tournament to finish eighth. Momo Kikuchi tied for 23rd individually with a total of 154. UMSL combined to shoot 618, 14 shots behind winner Rogers State. The Tritons also got off to a strong start at the UMSL Spring Invitational at Norwood Hills Country Club, leading the 17-team field through the first 36 holes with a combined score of 619, 26 shots better than second-place Lindenwood. Brunell is the leading individual with a score of 150 through the first two rounds. The tournament concludes Monday, and then UMSL will be idle until the GLVC Tournament beginning April 22 at Annbriar Golf Course in Waterloo, Illinois.

Men’s Golf
The 25th-ranked Tritons struggled to a 16th-place finish at the Argonaut Invitational in Pensacola, Florida. UMSL was one of 13 ranked teams in the 17-team field. Ian McCrary was the Tritons’ top individual finisher, tying for 49th with a combined score of 225 in the 54-hole tournament. UMSL finished with a total of 904, 47 shots behind tournament-winner Arkansas Tech. The Tritons will look to regain their form as they compete in the GLVC Tournament at the Broadmoor Country Club in Indianapolis.

Women’s Tennis
UMSL opened its GLVC season with back-to-back road victories, topping Truman State 6-1 on Saturday and Quincy 5-2 on Sunday. The Tritons were playing with only five players in both matches but swept the top five singles matches in each and also claimed the doubles point against the Bulldogs. Odette Beagrie, Anna Domingo, Maja Lietzau, Leticia Lunge and Tara Erler all won in straight sets against Truman State, and Lietzau and Lunge both pulled out three-setters at No. 3 and No. 4 singles, respectively, against Quincy. UMSL (7-5, 2-0 GLVC) will take on Drury on Saturday and Southwest Baptist on Sunday. Both dual meets are scheduled to be played at Dwight Davis Tennis Center in Forest Park.

Men’s Tennis
The Tritons opened their conference schedule with a 6-1 victory over Quincy Sunday at Reservoir Park in Quincy, Illinois. Marcus Navas, Juan Vigil, Jose Mayorga, Raphael Kerndl and Karl Heinrichs each won their singles matches for UMSL, which claimed its second dual meet victory of the season. UMSL will play host to Drury and Southwest Baptist on Friday and Saturday, respectively, at Dwight Davis Tennis Center at Forest Park.