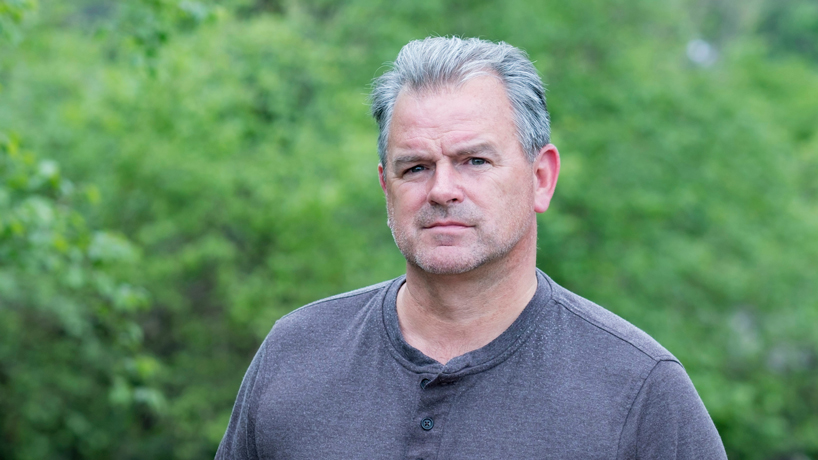 Richard Aites, a Marine Corps veteran and sergeant with the UMSL Police Department, is a columnist for Outdoor Guide Magazine and an author. Aites’ work often draws upon his childhood adventures exploring the Allegheny National Forest. (Photo by August Jennewein)

Richard Aites spent his adolescence in rural Pennsylvania, traversing the hills of the Allegheny National Forest and wading through the cool, clean waters of Sugar Creek.

“My family didn’t have any money, so I wasn’t going to the dances after school or going into town and hanging out with my buddies,” he said. “I’d grab my fishing rod or the shotgun and go up on the hill or down to the creek. That’s how I spent my days and evenings.”

Those formative years exploring the wilderness instilled in him a reverence for nature and curiosity about the history of the land he came to know so well.

Aites, a sergeant with the University of Missouri–St. Louis Police Department, has often drawn upon those interests as a writer. In addition to his role with UMSL Police, Aites is a columnist for Outdoor Guide Magazine and has contributed to publications such as Muzzle Blasts and The Suburban Journals in the past. In 2007, he also self-published “The Legend of Coal Oil Johnny,” a historical fiction book inspired by infamous oil baron John W. Steele.

As a kid, he wrote fiction stories as a creative outlet, and the hobby stuck with him as he got older.

“I think the only class that I paid attention to in high school was probably English,” Aites said.

By that time, his family had moved to the St. Louis area after steel mill closures in Pennsylvania left his father out of work. After graduating high school, Aites opted to join the Marine Corps rather than pursue his interest in writing.

During his four-year stint in the Marine infantry, he had the opportunity to travel the U.S. and to other countries, including Japan and South Korea. The experience was eye-opening for a young man from the Rust Belt.

Aites felt adrift after completing his service, though. He worked in restaurants for about five years and was having fun but decided he wanted more out of life.

“I started missing the camaraderie and the service that I felt in the military,” he said. “That’s when I started my law enforcement career.”

The move coincided with the beginning of his writing career in the late ’90s. Shortly after starting work with a north St. Louis County police department, he earned his first byline.

The now defunct Suburban Journals held an annual contest called Opinion Shapers, which invited community members to submit essays and opinion pieces. Each year, the publication selected about a dozen of the best submissions and invited the writers to serve as columnists for the year. Aites placed among the winners three times in the late ’90s and early ’00s. His columns were often inspired by his work as a police officer in suburban St. Louis.

“I met some pretty interesting people and got permission to write stories about them,” Aites said.

In 2003, he sold his first article to Muzzle Blasts, a magazine devoted to antique and muzzleloading firearms. The piece focused on the history of Civil War era revolvers. The relationship he subsequently developed with Eric Bye, editor of Muzzle Blasts, would be crucial to his next project, “The Legend of Coal Oil Johnny.”

Though Aites moved to the St. Louis area, he remained enamored with the local history of his childhood home in the Allegheny Mountains – particularly the story of John W. Steele.

An orphan, Steele was taken in by his aunt Sally McClintock, and they lived hand to mouth until their fortunes changed virtually overnight.

“He was a poor farm boy, and they lived in the area,” Aites recounted. “When Edwin Drake drilled his first oil well in 1859, all of a sudden, all these oil prospectors moved in and started buying up the land. Then they started renting property, creating oil leases, and farmers, who were dirt poor, were making money from royalties.”

When McClintock died, the property – and the immense wealth it created – passed to Steele. He became a multimillionaire and was eager to flash his newfound wealth. It’s said “Coal Oil Johnny,” as he became known, spent $100,000 in a single day and lit cigars with hundred-dollar bills. Soon, he was again broke, becoming a parable about the pitfalls of extravagance.

Aites’ historical fiction story blends true elements of the oil boom and Steele’s life with his own adventures combing through the countryside.

“Because there’s been so much written on the history of the oil boom, I concerned myself more with his childhood adventures,” he said. “It reads like a Mark Twain, Tom Sawyer type of thing.”

Bye was impressed and offered to edit the manuscript, and with his encouragement, Aites self-published the book through IUniverse in 2007. In the months after its release, it sold fairly well on Amazon and received a positive review in The Oil City Derrick. Now it’s carried in several bookstores, libraries and museums, such as the Drake Well Museum and the Venango Museum in Pennsylvania.

Aites accepted a position with the UMSL Police Department in 2012 and continued to periodically contribute pieces to Muzzle Blasts and The Backwoodsman. He’s enjoyed the chance to work with the diverse members of the UMSL community, especially connecting with students. He said it’s also nice to have small pieces of nature, such as the Egret Pond, on campus.

It wasn’t long before Litmag, the annual literary and art journal, caught Aites’ eye. He submitted an essay titled “God and Fish” several times, but it never made it into the magazine.

However, the submission process motivated Aites to keep revising the piece, which was dedicated to his father. It’s a reminiscence about the afternoons the two spent fishing and an examination of nature’s inherent spirituality.

“He didn’t go to church, never talked about God, but he admired nature,” Aites said. “He knew there was a creator, and so that’s what that was all about.”

The process might have a been a blessing in disguise.

On a whim, Aites sent the revised piece to Outdoor Guide Magazine, a regional publication focused on camping, fishing, hunting and outdoor travel. Carl Green, editor of OGM, loved it and offered to run it as a guest editorial in the September-October 2019 issue. For the next two years, Aites wrote occasional guest editorials for the publication.

Last April, Aites officially joined the OGM staff, writing a regular column, “The Life Outdoors.” He plans to continue writing the column for the foreseeable future, and one day, he might compile those writings into a book.

Aites knows he’s not likely to strike it rich writing, but that doesn’t matter. He’s proud every time he sees his name in print.