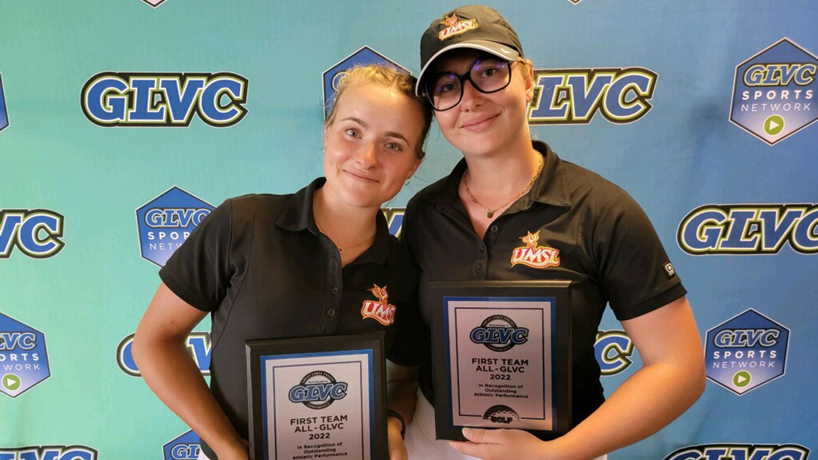 UMSL freshmen golfers Tove Brunell (at left) and Juliette Lecomte both garnered first-team All-GLVC honors while leading the Tritons to a runner-up finish at the conference championship.

Women’s Golf
UMSL advanced to the final match in the Great Lakes Valley Conference Championship but settled for second place after losing to top-seeded Indianapolis 3.5-1.5. The Greyhounds won their 10th straight title. The Tritons knocked off No. 2 seed Lindenwood 3.5-1.5 en route to the final after finishing third in stroke play with a combined score of 958. Freshmen Tove Brunell and Juliette Lecomte each earned first-team All-GLVC honors for finishing in the top five individually. Brunell was the league’s runner-up, shooting a 228 (74-78-76) while Lecomte was fifth with a score of 236 (77-78-81). UIndy’s Cathi Graf was crowned the individual champion with a total of 223. UMSL will officially learn of its NCAA Tournament bid Monday afternoon when the field is announced. The NCAA East Regional will be held May 2-4 in Kansas City, Missouri.

Men’s Golf
The NCAA Division II Tournament field was unveiled on Friday, and the Tritons are set to make their 16th postseason trip, including their ninth straight and 10th in the last 11 years. Coach Troy Halterman‘s team won last weekend’s GLVC Championship and nabbed the No. 3 seed in the Midwest Region behind Findlay and Grand Valley State. They will be one of 20 teams competing in the Midwest/Central Regional May 5-7 at the Purgatory Golf Club in Noblesville, Indiana. The top six teams from the Midwest/Central Regional and the top individual not with an advancing team will advance to the finals May 16-20 at the TPC Detroit in Detroit.

Men’s and Women’s Track
Sophomore Jacob Warner won the men’s 5,000-meter race by more than 11 seconds at Friday’s Gibson Invitational, recording a time of 15 minutes, 9.81 seconds at the meet in Terre Haute, Indiana. He was one of four UMSL runners to compete in the race. The rest of the Tritons spent the weekend competing in the Dick Cochran Invitational, hosted by Lindenwood. Kayley Heeter ran to a fifth place finish in the women’s 1500-meter final with a time of 5:28.97. Teammates Peyton Brueck and Lily Wagemann finished 10th and 11th in the same race. Kennedy Moore finished ninth in the women’s 400-meter race, clocking a time of 1:04.46. Haeley Johnson jumped 4.73 meters to place 11th in the long jump. Brett Lynch was UMSL’s top men’s finisher, placing 12th with a time of 4:34.16 in the 1,500-meter run. The Tritons will have a week off to recover before traveling to Bolivar, Missouri, for the GLVC Outdoor Track and Field Championships beginning on May 5 and hosted by Southwest Baptist.

Baseball
UMSL took three out of four games against visiting Rockhurst over the weekend, sweeping a Friday doubleheader with wins of 9-8 and 8-2 and beating the Hawks 13-4 in the first game of a Saturday doubleheader before losing 16-3 in the finale. Right fielder Clayton Stephens blasted a pair of home runs and drove in six runs for the Tritons in Friday’s first victory. He homered again in Friday’s first game, giving him nine on the season. Left fielder Brandon Olion went 3 for 3 and scored four runs in Friday’s second game, and catcher Kamerson Laskowski went 4 for 4 and drove in two runs. Adam Rose yielded one earned run and struck out nine in a seven-inning complete game. First baseman Mitchell Green had two home runs in the series, including a three-run shot in the sixth inning of Saturday’s Game 1 victory. UMSL (13-22, 12-8 GLVC) will play host to Quincy in a doubleheader on Tuesday before traveling to Springfield, Missouri, to take on Drury in a four-game series beginning Friday.

Softball
The Tritons split a nonconference doubleheader with Central Missouri, losing 8-0 in the opener before taking the second game 5-1 on Tuesday in Warrensburg, Missouri, but they were swept at home in a doubleheader Friday against GLVC rival Lindenwood after failing to close out a pair of games they led entering the seventh inning. UMSL dropped the first game 3-1 and lost 3-2 in eight innings in the second. Megan Brown hit a two-run homer during a three-run first inning in Tuesday’s victory and then pitched seven innings, striking out five without allowing an earned run in the win over the Jennies. The offense had trouble getting going against Lindenwood, combining for three runs on 10 hits. The Tritons had a one-run lead through six innings of the first game, but the Lions rallied for three runs off Annie Scaramuzzi in the seventh. UMSL led 2-1 entering the seventh in the second game, but Brown forced in a run when she hit a batter, and Lindenwood plated the winning run on a single up the middle in the eighth. The Tritons (27-18, 15-9 GLVC) wrap up their regular-season schedule when they play host to Southern Indiana and McKendree in doubleheaders next Saturday and Sunday, respectively.

Women’s Tennis
UMSL secured a berth in the GLVC Women’s Tournament, clinching the No. 3 seed in the West Division after winning dual meets against Rockhurst 6-1 on Friday and William Jewell 4-0 on Saturday at Dwight Davis Tennis Center in Forest Park. No. 1 singles player Odette Beagrie won both her singles matches in straight sets, losing only six games along the way, to lead the Tritons to victory. She was also dominant in two doubles matches with Leticia Lunge. Lunge was the only UMSL player to drop her singles match against Rockhurst as she fell in a match tiebreaker, but her 6-3, 6-2 victory at No. 4 singles against William Jewell helped clinch the victory. UMSL (9-7, 4-2, GLVC) will face Lewis, the No. 2 seed in the East Division, in the first round of the GLVC Women’s Tournament at 2 p.m. on Friday at the Dwight Davis Tennis Center.

Men’s Tennis
The Tritons also clinched the No. 3 seed in the West Division entering the GLVC Men’s Tournament after beating Rockhurst 5-2 on Friday and William Jewell 4-1 on Saturday at the Dwight Davis Tennis Center. UMSL’s depth was key to helping it prevail as No. 4 singles player Raphael Kerndl won both his matches in straight sets, losing only three games along the way, and No. 5 singles player Karl Heinrichs was also a double winner, losing only eight games in his four sets. UMSL plays the East Division No. 2 seed McKendree University in the first round of the GLVC Men’s Tournament at 9 a.m. Friday at the Dwight Davis Tennis Center.