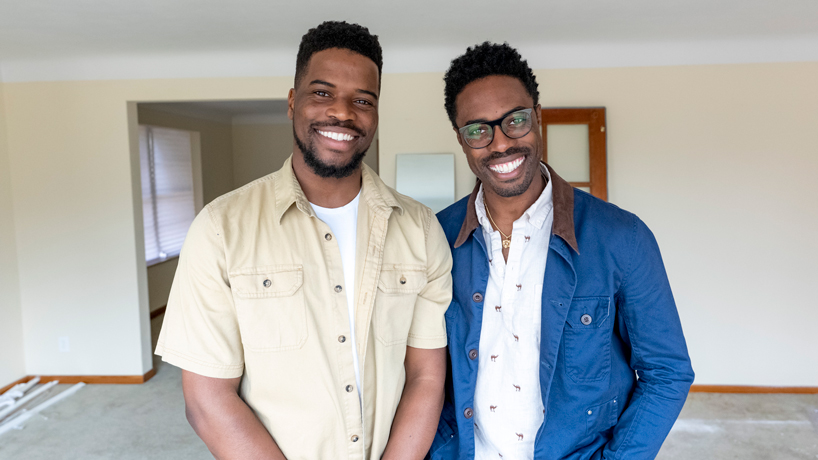 Jonathan and Willie McMiller started their own renovation and real estate business and now have their own reality show on HGTV. (Photos by August Jennewein)

When Jonathan and Willie McMiller were growing up in Florissant, Missouri, their father, Willie McMiller Sr., bought homes to upgrade and sell. He’d make the two, along with their three other brothers, work with him, calling them his little construction crew. They’d help clean up, paint and haul out debris.

Jonathan valued the hard work and gaining determination, but Willie, who was scared of the dark, was not as enthusiastic. Some of the properties were severely distressed, and he didn’t know what to expect and hadn’t yet developed a strong work ethic like his little brother Jonathan.

“I had a very short attention span,” Willie says. “I was supposed to be painting the wall and then I’d start drawing my face on the wall and all this other stuff.” But ultimately the brothers paid attention and are still applying what they learned. From their renovation and real estate business to their own show on HGTV, “My Flipping Family,” which debuted in February, the brothers are on their way to building an empire that they hope will change perceptions of St. Louis worldwide.

It all started with one home. The brothers purchased their first property to flip in 2013 when they bought a house in Spanish Lake for $7,000. 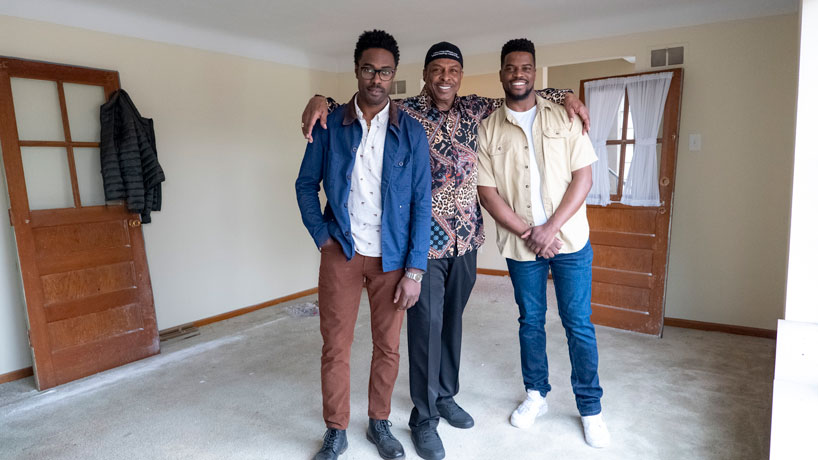 Willie (left) and Jonathan (right) McMiller got their first exposure to home renovation working with their father, Willie (middle), when they were kids.

Four years later, Jonathan, who graduated from the University of Missouri–St. Louis with a BSBA in finance in 2012, was looking to leave his accounting job and pursue real estate full-time. He asked Willie, who had moved to Los Angeles in 2007 to start a career as a comedian and actor, to invest in St. Louis and join him in the renovation and real estate business.

Convinced, Willie partnered with Jonathan and started Macc Boyz Properties. Since 2017, the company has renovated and sold eight homes and one commercial property.

Jonathan felt equipped to run his own business from what he learned at UMSL, especially the skills he gained from Malaika Horne, founding director of the Executive Leadership Consortium.

In addition to the coursework that helped Jonathan develop his business acumen, he also made a lot of professional contacts.

“I’m totally grateful,” Jonathan says. “If it wasn’t for the connections I made at UMSL, I wouldn’t have had the exposure and the experiences I pull from and draw on today.”

The original plan was to focus on and grow the business. But over time, Willie realized there could be more opportunities down the road.

With this in mind, Jonathan and Willie leveraged social media and Willie’s contacts in the entertainment industry to create buzz about their business and its potential to be a reality show.

Having starred on the fourth season of the BET reality show “College Hill” while a student at the University of the Virgin Islands in 2007, Willie was very familiar with the platform. Jonathan and Willie posted videos on Instagram showcasing their work and engaged their audience by asking for input on design decisions.

Production companies took note and started reaching out. It took a while to find the right fit, but eventually they connected with HGTV. Jonathan and Willie’s interaction and charisma appealed to the network and the executives at its umbrella company, Discovery.

“Me and Jon’s dynamic is perfect and not just for this show but for everyone involved because everybody from Discovery to Discovery Plus had to get on board,” Willie says. “They’ve all enjoyed our dynamic. Jon is the business side, and I tell people all the time, ‘I’m a dreamer.’”

Part of the dream is to use their exposure on HGTV to reframe the reputation of St. Louis. They want to spark the shift in the narrative that’s plagued the region, particularly since the shooting of Michael Brown.

“If I tell somebody I’m from St. Louis, we want the reaction to be like, ‘Oh, you’re those two guys who flip homes?’” Willie says. “We know we can’t solely change the narrative, but we want to begin to change it. There are going to be people watching from all over the world, and we’ll be their introduction to St. Louis.”

Jonathan wants people to know how much St. Louis actually has to offer.

“St. Louis is very diverse and culturally rich,” Jonathan says. “We have a lot of history that’s happened here – some history that we’re not so proud of and some that we should be very proud of. I think the biggest thing is that St. Louis is still a great place for people who want to come here and start something great.” 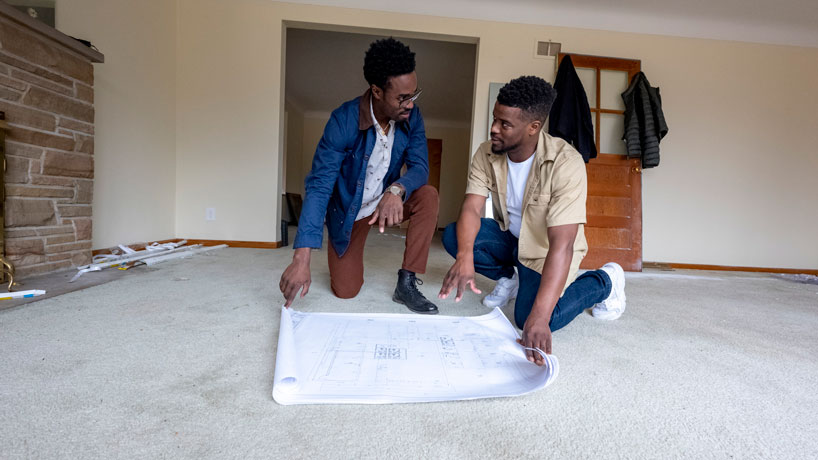 Willie and Jonathan McMiller look over blueprints of a house they are renovating.

Jonathan and Willie have not only started something but also are branching out beyond the show and their business. They purchased a property in University City where they plan on opening several businesses, one being an upscale coffee shop slated to open in the fall.

They’re also releasing a children’s book, “Adventures of Dylan & Perry: Operation Treehouse,” that mirrors their experiences as kids working with their dad on houses. It centers on themes of developing a work ethic and teamwork and encompasses the lessons their mother, Minerva McMiller, an educator and UMSL alumna, taught them.

They have a vision for their business and their legacy that includes investing in St. Louis, creating opportunity for others and staying true to who they are.

Though the brother’s burgeoning fame and opportunities will pull them away from St. Louis at times, the two plan to always stay connected to the region.

“We are very business focused,” Willie says. “We are going to be in St. Louis. We can have a billion dollars and put a lot of money in a lot of places, but St. Louis will always be our home. At the end of the day, we will always come back.” 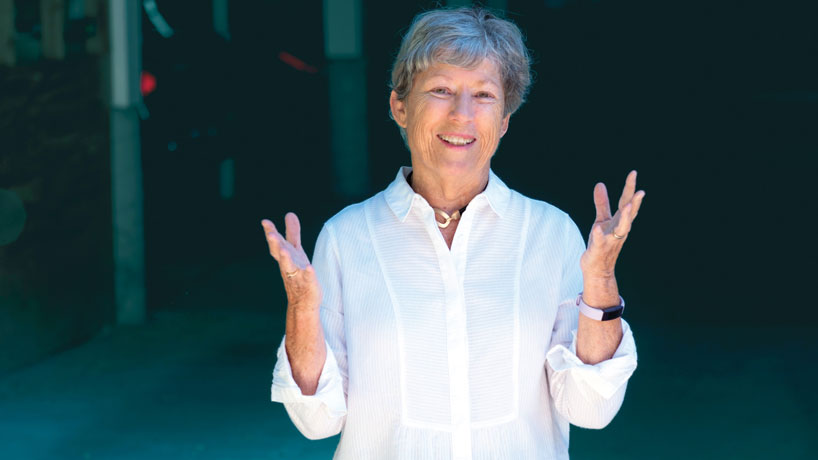 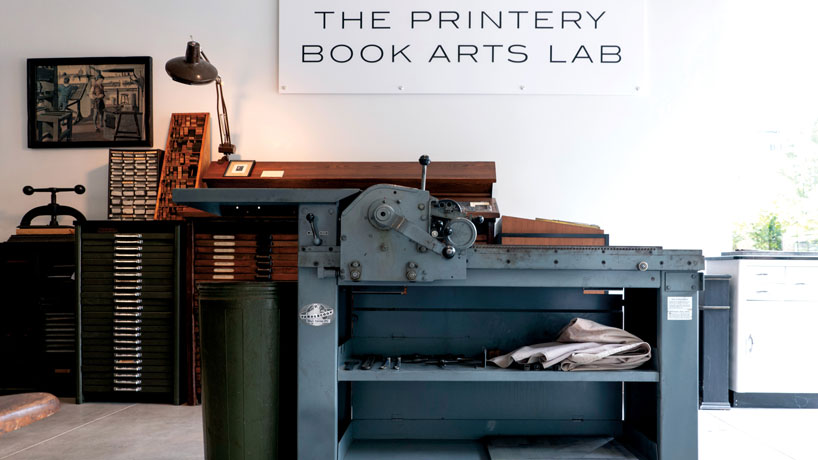