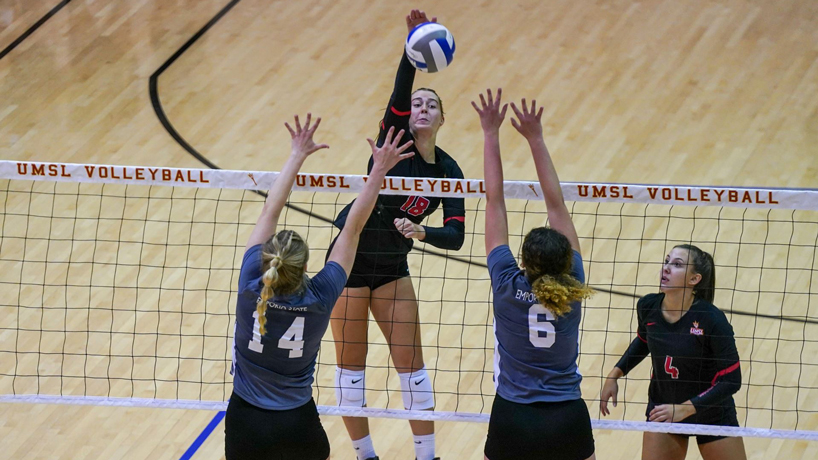 Senior Lexie Rang registered a team-best 50 kills – including a career-high 18 against St. Leo – as the UMSL volleyball team opened its season by going 3-1 at home in the UMSL Triton Invitational. (Photo by Patrick Clark/Athlete’s Eye Photography)

Volleyball
The University of Missouri–St. Louis volleyball team opened its season by going 3-1 in the UMSL Triton Invitational, dropping its opener against Missouri S&T in straight sets on Thursday before rebounding with victories over Emporia State and Southern Arkansas on Friday and St. Leo on Saturday at the Mark Twain Athletic Center. Senior Lexie Rang had a team-high 50 kills over the four games, including a career-high 18 against St. Leo. All-American Charlotte Richards, the reigning two-time Great Lakes Valley Conference Player of the Year, had 45 kills in the four matches. Freshman setter Caitlin Bishop had a team-high 142 assists in her first college action. UMSL will travel to Indianapolis next weekend for the UIndy Invitational. The Tritons are slated to face Minnesota Duluth, Minnesota State, Ashland and Ohio Dominican in four matches beginning Friday.

Men’s Soccer
The Tritons opened their season with a 2-2 draw on the road at Northwoods Thursday afternoon before blitzing Upper Iowa 5-2 in their home opener on Sunday at the Don Dallas Soccer Field. Fifth-year senior midfielder Leo Sowa scored three times in the two matches, but it was junior forward Jack Meuse who got UMSL going on Sunday, scoring the first of his two goals 33 seconds into the match. He added another goal about 11 minutes later, and the Tritons continued rolling, opening up a 5-0 lead before the Peacocks got on the board in the 50th minute. UMSL will travel to Wisconsin-Parkside on Friday and will play Kentucky Wesleyan at home on Sunday afternoon.

Women’s Soccer
UMSL split two games on the road to open its season, blanking Union 3-0 on Thursday in Jackson, Tennessee, before falling to Delta State 2-0 in Cleveland, Mississippi. Jalyn Richardson, Cammie Robinson and Maya Ware each scored against Union, and the Tritons controlled play throughout, finishing with a 10-1 advantage in shots on goal. Mary Kate Neal made one save in recording the shutout. UMSL managed the same number of shots as Delta State on Saturday, but the Lady Statesmen found the back of the net twice in the first half. The Tritons will remain on the road, visiting Northwest Missouri State on Thursday and Kentucky Wesleyan on Sunday.