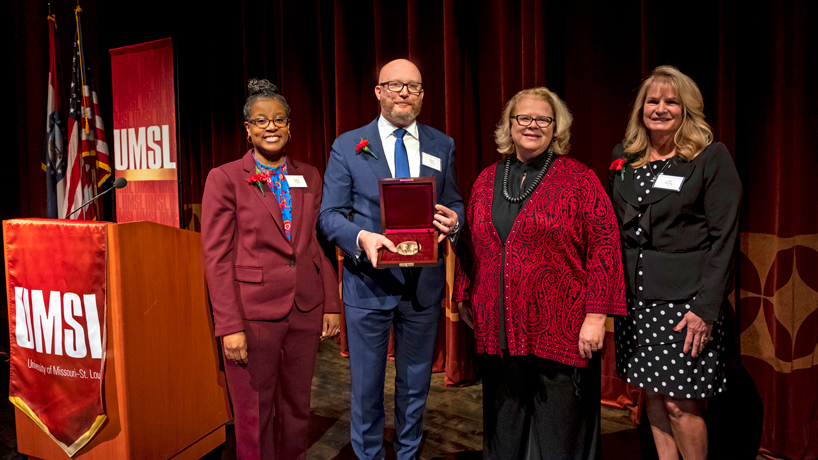 The partnership between The Boeing Company and the University of Missouri–St. Louis dates back to the 1980s when its forerunner, the McDonnell Douglas Corporation, began investing in the university.

For more than three decades since, Boeing has given generously to support scholarships, helped fund new academic programs and contributed to the construction of both the Blanche M. Touhill Performing Arts Center and Anheuser-Busch Hall. Boeing has also employed more UMSL graduates than any other company and provided tuition assistance to scores of its employees seeking an UMSL education.

In recognition of all of its support throughout the years, Chancellor Kristin Sobolik presented The Boeing Company with the 2022 E. Desmond and Mary Ann Lee Medal for Philanthropy – the university’s highest honor – at the 31st annual Founders Celebration, held Thursday night in the Anheuser-Busch Hall at the Touhill.

“The value that Boeing brings to UMSL goes well beyond the organization’s financial generosity,” Sobolik said. “Its employees regularly give back to support students, provide mentorship and guide our academic programming so our curriculum is relevant to today’s dynamic global economy.

“The direct engagement and guidance UMSL students receive from Boeing employees enhance their experiences both inside and outside of the classroom. Together, UMSL and Boeing transform lives – all for the benefit of the entire St. Louis region.”

Boeing Vice President and General Manager and St. Louis Senior Executive Steve Parker and UMSL alumnae Lynn McLaury and Evelyn Moore were in attendance to accept the honor. McLaury serves as the company’s chief financial officer of enterprise service and sustainability, and Moore, who received UMSL’s Outstanding Young Alumni Award in 2015, is the company’s director of engineering and chief engineer for the F/A-18 E/F and EA-18G programs for bombers and fighters.

“On behalf of The Boeing Company, it’s a true honor to receive this award,” Parker said. “This university does transform lives, and we’re very pleased to be part of it. As one of the largest employers in the St. Louis region, it is important that Boeing supports academic institutions that represent the community just like UMSL, a totally world-class university. I’m very pleased to say that we have over 800 alumni at Boeing working through engineering and finance, supply chain and business over the past many years.

“I would like to thank very much Chancellor Sobolik and the UMSL faculty and staff for recognizing Boeing’s philanthropic efforts. We are extremely grateful to the university. This award means a great deal, and it’s our privilege to be amongst many stellar stewards in the St. Louis community and other areas of America and around the world who have made such a difference.”

Boeing has most recently directed philanthropic support toward the College of Business Administration and the UMSL/Washington University Joint Undergraduate Engineering Program as well as the UMSL Veterans Center. The company has also funded Boeing FLITE – Future Leaders in Thought and Experience – a 10-week competitive summer diversity-based business cohort of 12 students from four participating universities, including UMSL. The students live on the UMSL campus while part of the program and work at Boeing.

“On behalf of our students, faculty and staff, thank you for your generosity of time and talent,” Sobolik told Parker, Moore and McLaury during Thursday’s event. “We are all so inspired by your work and role as ambassadors, leaders, and champions of fellow members of the UMSL community. The wisdom you impart and mentorship you selflessly provide will help shape the future of the St. Louis region and beyond. Thank you for transforming lives and congratulations for being our 2022 Lee Medal recipients.”

The Founders Celebration also provided an opportunity to express gratitude to many other people who have offered philanthropic support to the university over the past year. During Thursday’s program, the university recognized members of the Goode Society, the 1963 Legacy Society and the Chancellor’s Circle for their generosity. There was special recognition for the late Kirk Richter, his wife, Maureen, and the rest of the Richter family for their generous contributions to the university, including the lead gift for the Richter Family Welcome and Alumni Center.