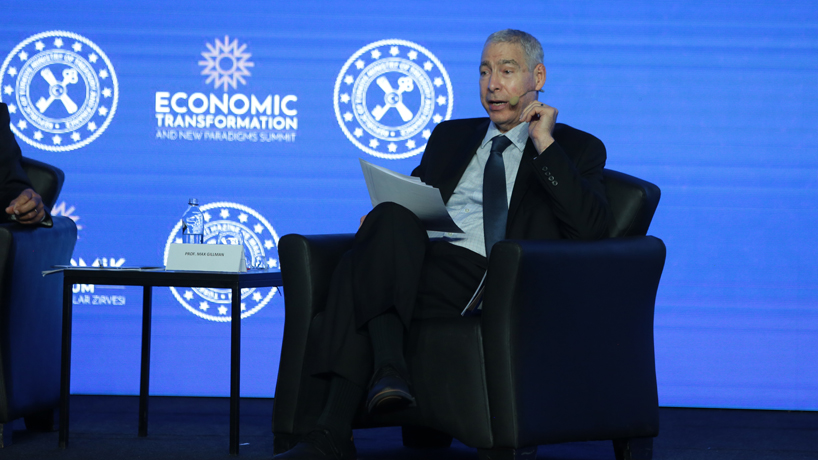 Max Gillman, a member of the faculty in UMSL’s Department of Economics, speaks during a panel discussion at the “Economic Transformation and New Paradigms” summit on Sept. 29 at the Four Seasons Hotel in Istanbul. (Republic of Turkey photo)

Max Gillman, the Friedrich A. Hayek Professor in Economic History at the University of Missouri–St. Louis, joined a select group of economists from around the world at Turkey’s first Economic Transformation Summit, held Sept. 29 in the capital city of Istanbul.

The Turkish Treasury and Finance Ministry organized the one-day summit, “Economic Transformation and New Paradigms,” which explored major shifts that have taken place in the global economy in recent years, including but not limited to those caused by the COVID-19 pandemic.

Gillman joined a panel of economists from South Korea, the Netherlands and Italy discussing the “Importance of Investment-Production-Export model for Developing Countries.” 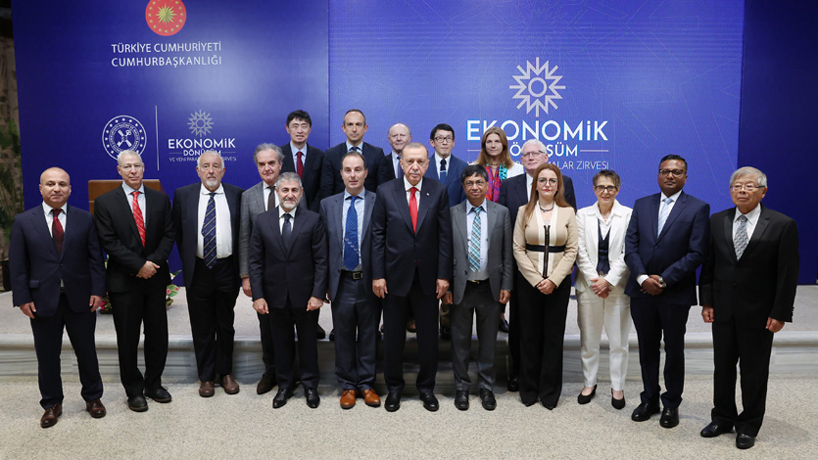 Professor Max Gillman (second from left) joined a group of 18 other economists from around the world at the Economic Transformation summit in Istanbul and had a chance to interact with Turkish President Recep Tayyip Erdoğan (center). (Republic of Turkey photo)

“Turkey has this new economic model, and they call it heterodox economics,” Gillman said. “All of us were trying to put into perspective the Turkish economic model, which is emphasizing investment in infrastructure, and so people like me were also emphasizing investment in the education sector and how that’s essential for the developing economies to become developed economies.”

Last year, Gillman published a paper in the journal Economic Modelling titled “Steps in Industrial Development through Human Capital Deepening” that served as the foundation for his talk. The paper presents a model for industrial development in which human capital is deepened, education time increases and labor shifts away from agriculture. As that occurs, labor shifts toward new industry and away from traditional industry.

“The model explains rising education levels, growth and labor reallocation using a minimally complex approach that jointly explains stylized facts through human capital deepening within each industry,” according to its abstract.

Other panels explored “New trends in economic policies in the post-pandemic period,” the “Growing importance of infrastructure investments in the new period” and the “Growing importance of a financial architecture that supports growth in the new period” with economists from Australia, Germany, Japan, the Philippines, Portugal, Sweden, Singapore, the United Kingdom and the United States.

The next morning, the speakers were invited to a breakfast with Turkish President Recep Tayyip Erdoğan at the Presidential Palace, along with the minister of Treasury and Finance, the head of the Turkish central bank and the president’s economic advisors.

“It was exciting, it really was,” said Gillman, who along with his fellow economists had an opportunity to offer advice to the Turkish leader.

Gillman, who researches inflation, said he stressed the importance of Turkey to the Western economy and the Western alliance and encouraged him to seek a loan from the International Monetary Fund to try to get control over soaring inflation in the country.

Inflation topped 80% in Turkey earlier this month, and Gillman noted the high impact it’s having on people living in the country.