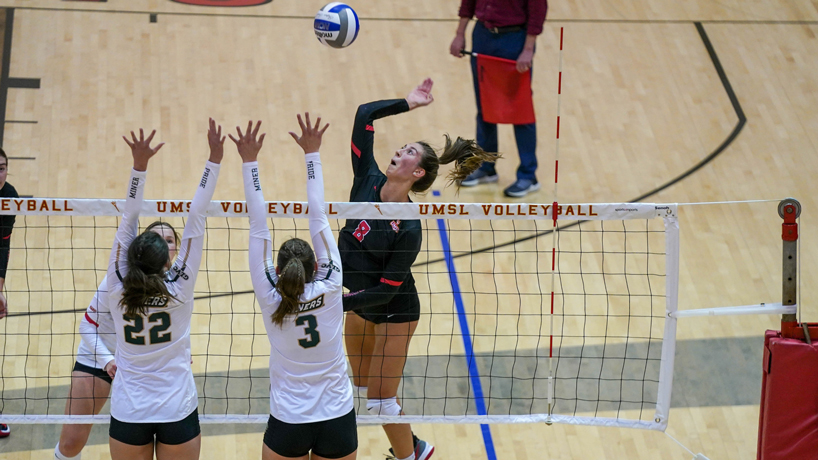 All-American outside hitter Charlotte Richards led the volleyball team to two victories in three matches over the weekend at the 2022 Midwest Region Crossover Tournament in Hammond, Indiana. The Tritons beat Northern Michigan and Davenport after dropping a five-setter against Northwood in its opener. (Photo by Patrick Clark/Athlete’s Eye Photography)

Volleyball
The University of Missouri–St. Louis volleyball team went 2-1 over the weekend in the 14th annual Midwest Region Crossover volleyball tournament, which brought together 36 teams from the the Great Lakes Valley Conference, Great Lakes Intercollegiate Athletic Conference and Great Midwest Athletic Conference for two days of competition in Hammond, Indiana. The Tritons split on the opening day, losing a five-setter against Northwood 25-19, 12-25, 15-18, 16-25, 15-9 but bounced back to top Northern Michigan in straight sets 25-20, 25-17, 25-17. They then rallied for another victory on Saturday, beating Davenport 24-26, 25-21, 25-23, 25-21. All-American outside hitter Charlotte Richards combined for a team-high 24 kills in Friday’s matches against Northwood and Northern Michigan. Senior Lexie Rang had 20 kills and 10 digs against Davenport, and freshman setter Caitlin Bishop had a season-best 54 assists. UMSL will return to GLVC competition on Saturday when it plays host to Maryville at the Mark Twain Athletic Center.

Women’s golf
The 18th-ranked Tritons finished in fourth place in a 16-team field at the National Preview last Tuesday at Fox Run Golf Club. The course, in Eureka, Missouri, will host the NCAA Division II Women’s Golf Championship in May. Sophomore Tove Brunell placed fifth overall while leading UMSL to a combined score of 916. Brunell posted two birdies and an eagle on the back nine Tuesday to post a final-round 73, giving her a two-day total of 6-over-par 222. Freshman Wilma Zanderau joined Brunell in the top 10, tying for eighth with a score of 226 and was later named the GLVC Player of the Week. The Tritons will wrap up their fall schedule Monday and Tuesday at the Music City Fall Invitational  at Old Fort Golf Club in Murfreesboro, Tennessee.

Women’s Soccer
UMSL and Maryville tied 2-2 on Friday afternoon at Maryville in the Tritons’ only match of the week. UMSL (5-6-3, 3-4-3 GLVC) had an early lead when Jalyn Richardson scored her sixth goal of the season in the 12th minute, and Cammie Robinson extended the lead to 2-0 with her fourth goal in the 43rd minute. But the Saints, unbeaten in GLVC play this season with 5-0-5 conference record, rallied after intermission with goals by Molly Krispin and Lexi Gentry, the last one came in the 89th minute. The Tritons will finish their regular-season schedule with home matches against Indianapolis on Friday and McKendree on Sunday.

Men’s Soccer
The Tritons played Maryville to a scoreless draw on the road Friday in their only match of the week. Sophomore goalkeeper Austin Reis made a pair of saves to preserve the shutout, and the Maryville outshot the Tritons 9-6. UMSL (4-7-3, 3-5-2 GLVC) is heading into its final week of the regular season and will take on Indianapolis on Friday and McKendree on Sunday. Both matches are at Don Dallas Soccer Field.

Men’s and Women’s Swimming
UMSL’s swimming teams combined to win 23 of 28 events in their home opening dual meet against Lewis on Saturday afternoon at the UMSL pool. Jon Osa, Conley Savage, Guillem Masjuan Roca and Aaron Wicklund each won two events for the men’s team, which beat Lewis 176-86, and Austin Stevenson won the 100-yard breaststroke and was part of the winning 200-yard medley and 200-yard freestyle relay teams. Franziska Hauptman took three events – the 100-yard backstroke, 200-yard backstroke and 400-yard individual medley – for the women’s team, which won 184-78, and All-American Zara Konstapel added first-place finishes in both the 100- and 200-yard breaststroke. The Tritons next race will be against William Jewell on Saturday, Oct. 29, in Liberty, Missouri.