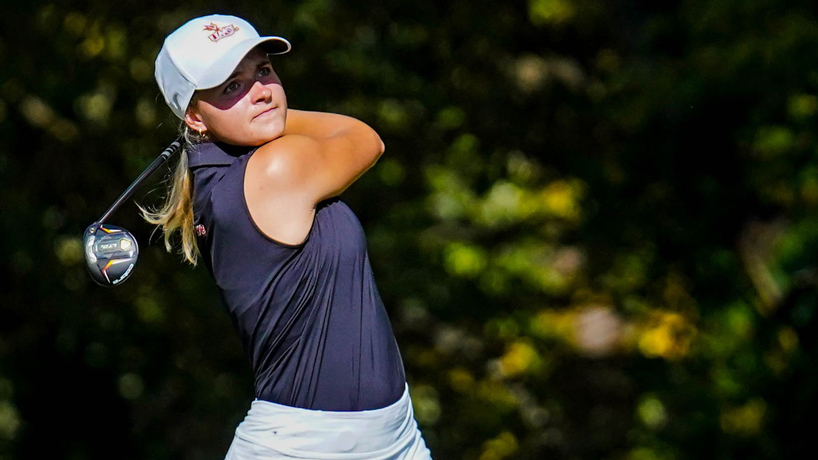 Sophomore Tove Brunell claimed medalist honors for the third time in her career while leading UMSL to a team victory in the Fall Music City Invitational. (Photo by Patrick Clark/Athlete’s Eye Photography)

Women’s golf
The 13th-ranked University of Missouri–St. Louis women’s golf team won its final event of the fall schedule, taking first place in the Fall Music City Invitational held last Tuesday at Old Fort Golf Club in Murfreesboro, Tennesseee. Sophomore Tove Brunell claimed medalist honors for the third time in her career with a 36-hole total of 139, including six birdies during her final round. Brunell, named the Great Lakes Valley Conference Player of the Week for the third time this fall, helped UMSL post a combined score of 593 to win the tournament by two strokes over Texas-Permian Basin. Freshman Wilma Zanderau finished fourth overall with a score of 145 to secure a spot alongside Brunell on the all-tournament team.

Women’s Soccer
The Tritons secured a berth in the GLVC Tournament after playing No. 13 McKendree to a 2-2 draw Sunday afternoon on Senior Day at Don Dallas Field. It was UMSL’s fourth consecutive tie and came two days after a 1-1 draw against Indianapolis on Friday evening. Jaycee Cotton and Karley Kenzinger scored for the Tritons, the latter giving her team a 2-1 lead in the 64th minute. McKendree’s Anna Stiffler scored her 12th goal of the season in traffic off a feed from Morgan Cervera with just under 11 minutes remaining to tie the match at 2, and it remained that way the rest of the afternoon. UMSL (5-6-5, 3-4-5 GLVC) will be the No. 8 seed when the GLVC Tournament kicks off next weekend at Bourke Field in Kansas City. The Tritons will take on Rockhurst at noon on Sunday. The Hawks won 2-1 on Sept. 30 in the only meeting this season between the two teams.

Men’s Soccer
UMSL rallied for a 2-1 victory over McKendree Sunday afternoon in its season finale at Don Dallas Field. Missouri S&T and Truman State edged out the Tritons for the final two spots in the GLVC Tournament field. UMSL at least finished on positive note heading into the offseason as Mylz Barrington and Quinton Garofalo each scored their first goal of the season in the second half to help the Tritons rally from a 1-0 halftime deficit. Goalkeeper Austin Reis made one of his three saves with 29 seconds remaining to preserve the shutout. UMSL, which fell 5-1 against Indianapolis on Friday, finished the season with record of 5-8-3, including 4-6-2 in GLVC play.

Volleyball
The Tritons dropped the opening set against Maryville Saturday in their return to GLVC play but took control thereafter in a 23-25, 25-10, 25-20, 25-15 victory. The win came a week after UMSL went 2-1 at the 2022 Midwest Region Crossover. Senior Lexie Rang had a team-high 20 kills along with three aces and four blocks in the victory, her team’s third in a row. Senior Charlotte Richards added 18 kills, Caitlin Bishop registered 57 assists, and Kylie Adams led the team with a match-high 27 digs. The Tritons (17-5, 8-1 GLVC) have won seven straight matches against conference opponents, and they’ll take to the road this week to face McKendree on Friday and Indianapolis on Saturday.

Men’s and Women’s Cross Country
Junior Benjamin VandenBrink finished 23rd in a field of 470 runners to pace the UMSL men’s cross country team in the UAH Invitational Saturday morning at John Hunt park in Huntsville, Alabama, in what was the Tritons’ final tune-up before the Nov. 5 GLVC Championship. VandenBrink posted a time of 24 minutes, 8 seconds in the 8-kilometer race. Freshman Matthias Shelp was the second UMSL finisher, posting a time of 26:18. Junior Kayley Heeter led the women’s team, finishing the 5-kilometer race in 19:56 to place 190th in a field of 400 runners. Both the men’s and women’s teams will compete in the GLVC Cross Country Championships Nov. 5 at Principia North Farm XC Course in Elsah, Illinois.