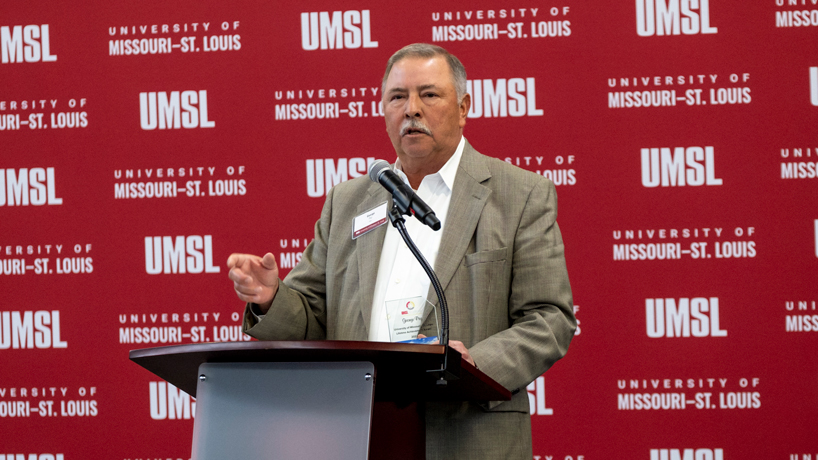 The University of Missouri–St. Louis community is mourning the passing of distinguished alumnus George Paz, a 1982 graduate in business administration and accounting who went on to become chairman and CEO of Express Scripts. Paz, who completed a three-year term as president of UMSL’s Chancellor’s Council earlier this year, died unexpectedly Sunday evening. He was 67.

“George was a visionary leader, well respected throughout our region and far beyond for his business acumen, generosity and commitment to inclusivity, and his loss will be felt profoundly,” Chancellor Kristin Sobolik said. “He was so proud of the education he received at UMSL and credited it for preparing him for the success that followed in his career, most notably as CEO and chairman of Express Scripts. We are so grateful for all the ways he invested in the university and our students with his time, wisdom and financial support. We offer our deepest condolences to his family, particularly his wife, Melissa.”

UMSL Accelerate honored Paz with a lifetime achievement award last Thursday night at the inaugural UMSL Accelerate Entrepreneur of the Year Awards. In accepting the award, Paz talked about some of the keys to his career success, growing up with modest financial resources as the grandson of Mexican immigrants and going on to lead a Fortune 100 company.

He often expressed gratitude to UMSL and the College of Business Administration for helping him build the foundation for his professional accomplishments.

“I started school in 1973, I graduated in 1982, so I am your stereotypical UMSL graduate,” he said. “I went to school for a couple years, didn’t feel like it fit for me, so I quit for quite a few years, came back, worked full-time, at night went to school and tried to make a difference.”

By the time he graduated, Paz was already working as a junior accountant at General American Life Insurance Company – now an affiliate of MetLife. He eventually became a CPA and worked his way up to senior accountant, accounting administrator, tax planning analyst and director of tax planning.

In 1987, he joined Coopers & Lybrand – now PriceWaterhouseCoopers – as a partner, and he remained there for six years. But in 1993, he took a risk when he left the firm and took a position as executive vice president and chief financial officer for Life Partners Group.

“I got my pay cut by about a third,” Paz said. “I had two children and one on the way at the time, and a lot of people thought I was crazy. But it was a company that had a unique way to sell life insurance. That doesn’t bode so well anymore. People don’t buy it that much. But in those days, it was a really critical component of a young family and how they got started and protected themselves. For me, it was really understanding and knowing that there’s there has to be an unmet need, having a product that meets that need, and then surrounding yourself with incredibly intelligent people that can help you get to where you need to be.”

The experience Paz gained by that decision proved invaluable as he helped take the company public, and it also helped pave the way for him to go to Express Scripts as the company’s CFO in 1998.

“There was a gentleman by the name of Barrett Toan, one of the smartest, best people you’ve ever met in your life, and he had a vision,” Paz said of Toan, the company’s former CEO and chairman. “He was not a finance guy. I think together we set on a path to really challenge the way health care is delivered in this country. We went from a very, very small company that would had trouble making payroll to over $100 billion in revenue. It was all about, again, finding a need, developing products that met that need, always living with integrity, doing the right thing at the right time and then surrounding yourself with incredibly smart people. That’s what it’s all about.”

Paz was promoted to Express Scripts president beginning in 2003 and joined the board of directors in 2004. He became CEO in 2005 and was named chairman in 2006.

He never lost sight of his alma mater and the role it played in helping him succeed. He was leading the company when it opened its corporate headquarters on the UMSL campus in 2007.

Paz, who received a Distinguished Alumni Award in 2009, was instrumental in establishing many other fruitful relationships between Express Scripts and his alma mater, including internships, academic programs, consumer behavior research, diversity initiatives and community betterment projects. Express Scripts has served as the primary benefactor of the UMSL Bridge Program’s Saturday Academy, and both the company and Paz personally invested in UMSL scholarships and facilities.

He served as chair of UMSL’s first comprehensive fundraising campaign, which raised more than $150 million from 2005 to 2012, exceeding its original goal by $50 million.

Paz retired as CEO of Express Scripts in 2016, though he remained the company’s nonexecutive chairman until it was acquired by Cigna in 2018.

A longtime member of UMSL’s Chancellor’s Council, Paz served as president from 2019 until May, when he chaired his last meeting.

Paz’s steadfast dedication to UMSL made an immeasurable impact on the university and students that will be felt for decades to come. He is being remembered here as one who lived well UMSL’s core values of integrity, innovation and engagement. In 2020, George and Melissa Paz made a philanthropic gift of $4 million to the university to support student scholarships. The university honored them with the E. Desmond and Mary Ann Lee Medal for Philanthropy in 2021.

Because of them, even more people, including many from disadvantaged backgrounds, will get to experience the transformative power of a college education and be a part of shaping the future of the St. Louis region and beyond.

Make a donation to the George and Melissa Paz Scholarship Fund in Paz’s memory.