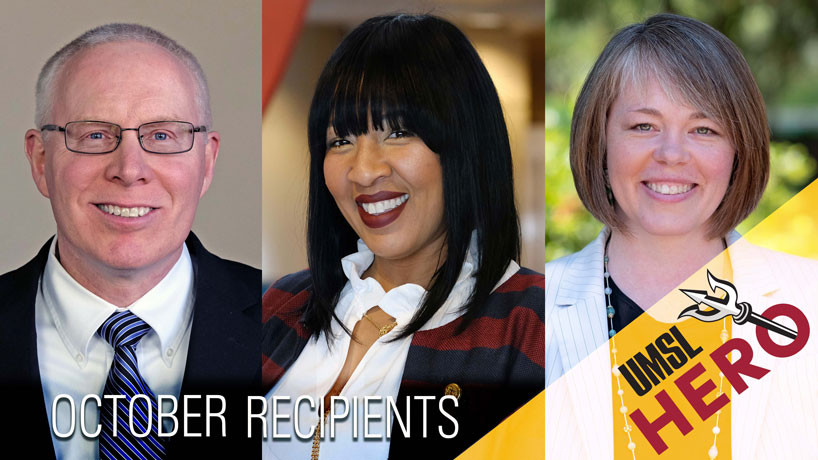 This month’s UMSL Hero Award honorees are Randall Vogan, the director of finance and accounting; Channon Peoples, the director of precollegiate student services; and Erin Whitteck, the assistant director of the Center for Teaching and Learning. (Photos by August Jennewein)

When Vogan, a Pittsburgh native, graduated college with a business degree, the economy in his hometown had taken a downturn, so he worked as a draftsperson in an engineering firm, a skill he learned from his father, an engineer. When unemployment got worse it prompted him to get a more “practical” job, and he went back to school to study accounting.

He has enjoyed working with figures ever since.

After Vogan finished his degree in accounting, he took a role as an accounting director at a metal manufacturing facility in Illinois. Later, he worked as a senior accountant at Illinois College in Jacksonville, Illinois. Occasionally, during time off, he and his wife would visit St. Louis, which got them thinking about making a move.

“When I traveled with my wife to visit St. Louis, we would think about what it would be like to live there,” he said. “This led me to apply for a senior accountant opening at UMSL.”

He landed the position in 1993 and has remained at the university ever since. Moving up the ranks, Vogan has experienced some changes in his field and in his role.

“It seems more recently we’re focused on projections,” he said. “‘How will the campus fare?’ There’s more emphasis on enrollment, expense estimates and things like that. That seems to be a lot more important thing now than it was back when I first started.”

But with changes, transitions and pivots, Vogan is still enjoying his role at the university nearly three decades later, because of the people and environment.

“I like working with a good group of people that really seem as if they care for the campus and really want to do a good job,” Vogan said. “We support each other. I feel good about myself when I’m able to feel like I’m making contributions and helping others in some ways that are tangible.”

Those tangible outcomes have been noticed, particularly by Tanika Busch, vice chancellor for finance and administration.

“Randy successfully coordinates a high volume of financial data for our campus,” she said. “He excels at researching and analyzing UMSL’s financial data and risk areas. He was integral in managing the Covid relief funds for our campus the past three years. Randy is a valued member of the finance team and all stakeholders across campus respect him and his knowledge of accounting practices and procedures. He is a team player and is always willing to jump into a project and help find viable solutions.”

Though Vogan doesn’t seek accolades, he appreciates the recognition of the UMSL Hero Award.

“All through these years, I tried to do a good job – trying to work hard,” he said. “It was nice to be recognized.”

Peoples, an UMSL alumna, was working at AT&T when she was laid off. To remain active, she began volunteering with the UMSL Bridge Program. Peoples was so impressive that she was eventually hired as a receptionist in the department. Two decades later, she now serves as the director of Precollegiate Student Services, where she champions over 4,000 middle school and high school students who are preparing for success in higher education. The free UMSL Bridge Program is in its 37th year.

Peoples was surprised she’d been recognized with the UMSL Hero Award and was filled with gratitude.

“My approach is collaborative because I don’t feign to act like I know everything,” she says. “I know a lot, by nature of being here for so long and working in this field, but there is always something to know, there’s always a way to grow. So, I would count it as collaborative with a team we have here and our partners in the community. We are always looking for ways to not reinvent ourselves but to evolve.”

Natissia Small, vice provost for access, academic support and workforce integration, values Peoples’ commitment to her work and the students and families she serves.

“Channon has a passion for educating and mentoring youth and brings a unique perspective to setting intentional goals that will empower students to achieve degree attainment,” Small said. “Her positive disposition further demonstrates her ability to adapt quickly to a variety of challenging situations. She is an asset to the success of this department as she consistently strives to meet department and team goals while serving as a model leader through her commitment to empowering her team. UMSL students, faculty and staff have valued her professional demeanor, knowledge base and leadership skills. Channon is dedicated and passionate about her career in higher education.”

Peoples has been with the program long enough to see its long-term impact. She has seen students get accepted to college, graduate, get jobs and start families. She’s also witnessed other students’ circular experiences, including one former program participant who began working in the Bridge Program office after graduating from college. Such occurrences aren’t unusual.

She is grateful to be able to help students navigate their way into higher education.

“It’s something I didn’t have,” Peoples said. “I didn’t have someone guiding me, telling me which major to choose or how to select the best college or even helping my parents be better resources for me. I had to figure it out. But I am thankful to be able to pour into our young people, and even if it’s just a small portion of their lives, they can look back and be able to say we helped them achieve their goals and dreams.”

Whitteck thought she’d be returning to Canada after getting a PhD in chemistry at the University of Illinois Urbana-Champaign, but her plans took a different direction. She began teaching at the university and, like her mother predicted, she met an “American boy” and wound up staying in the United States.

Whitteck taught at several higher education institutions before deciding to join UMSL, where she is approaching her third year as the assistant director of UMSL’s Center for Teaching and Learning. She is also a teaching professor of chemistry.

In addition to wanting to continue teaching, she was looking for a different kind of role and became excited about the premise of working with faculty and providing tools to help with instruction and curriculum.

“I was really passionate about working in educational development to help support faculty,” Whitteck said, “because I think faculty success translates to student success.”

In Whitteck’s role she has launched the Tritons as Partners program where undergraduate students serve as context experts and observe faculty and provide weekly feedback on their teaching. Whitteck also fosters community through teaching circles and faculty learning communities. She also helps facilitate the anti-racist educators group that has conversations about the importance of acknowledging and understanding UMSL’s unique context in St. Louis and how it relates to teaching and learning.

This requires the ability to foster relationships, a skill Keeta Holmes, the assistant vice provost for academic innovation and director of the Center for Teaching and Learning, has observed.

“Erin is a connector of people,” Holmes said. “She develops strong and lasting bonds with the faculty and staff colleagues with whom she works. She does so authentically by highlighting their strengths,
showcasing their points of pride and listening carefully to what they want to say – and what they may be nervous to share. She seemingly does so naturally, though I know how much effort she puts into the choices she makes for professional growth and recentering. The long list of faculty and staff who have grown to rely on her and call her a friend is vast and varied, showing evidence of the reach she has at UMSL.”

Whitteck, remaining focused on how she can best serve her colleagues, hasn’t expected to be recognized publicly for her work. When she was alerted that she’d received the UMSL Hero Award, she had mixed emotions.

“I was proud, but I also was like, ‘Oh, there’s so many other people who deserve this award more than I do,’” she said.

Her enthusiasm for her role is fueled in part by her opportunities to learn and grow with colleagues.

“I love this position because I get to keep learning from all these faculty on campus about all the amazing, creative things they’re doing,” she said. “I get to implement that in my teaching. I feel so lucky to get to learn from and with all of these different faculty across the university.”