Marlie Mollett admits she wasn’t too familiar with the geospatial field when she began working on a research project to develop a high-resolution gravity map.

“I didn’t even know that there were gravity anomalies,” she says with a laugh. “I thought, ‘Isn’t gravity 9.8 meters per second squared? What do you mean it’s different in different places?’”

Through a collaborative research initiative, Mollett has had the opportunity to contribute to the project and become acquainted with the intricacies of the industry, first as a University of Missouri–St. Louis physics student and now as a geodetic earth scientist at the National Geospatial-Intelligence Agency. Over the course of two years, she’s learned to code, prepare global-scale model data sets and run machine learning models.

It’s a career path that’s likely to become more common in the near future thanks to a new collaboration. NGA’s new $1.75 billion west campus in north St. Louis is the heart of a growing geospatial ecosystem, and UMSL has been at the forefront of an effort to meet the needs of the agency and industry. That research project – a partnership between NGA and UMSL’s Department of Mathematics, Physics, Astronomy and Statistics – is just one piece of a broader investment by UMSL in the sector, which is poised to become a major economic engine in the St. Louis region.

In 2020, the university launched the UMSL Geospatial Collaborative to promote geospatial technological innovation, research and community engagement. The new center also facilitates connections between the university and the agency as well as other companies operating in the geospatial sector. Since then, UMSL has only strengthened its commitment to the burgeoning field.

Last fall, the university and NGA signed an Educational Partnership Agreement, while the University of Missouri System and the agency signed a Collaborative Research and Development Agreement. The Office of Geomatics at NGA also wrote several joint projects into the CRADA, including the gravity map Mollett worked on.

As part of the educational agreement, UMSL faculty and staff are working with NGA professionals to develop a variety of academic courses to provide students with the skills necessary for careers in geodesy, geophysics and geospatial intelligence. Furthermore, UMSL is the only university in the region working with the agency to develop foundational geodesy coursework.

The college is currently working to establish a certificate program in geographic information systems and sciences and a GIS emphasis area in the data science and analysis bachelor’s program. The university will also work to train K-12 educators in innovative teaching techniques to inspire future generations to pursue STEM careers.

To support these goals, UMSL sought and was awarded $1 million in funding from the MoExcels Workforce Initiative to establish the Geospatial Advanced Technology Lab on campus. The university will provide matching funds, as well.

Craig and Provost and Interim Vice Chancellor for Academic Affairs Steven Berberich view the lab as the future hub for an evolving sector, which could lead to a competitive advantage in adjacent industries such as national security and transportation and logistics.

“I think we’re going to play a key role in workforce development in the pipeline,” Berberich says. “The work that we’re doing – all the way from grade schools up to the degrees we offer – and the ability to have an EPA, means we have the ability to develop the educational programming that NGA needs.”

This focus is already benefitting UMSL alumni and students such as Mollett and Emily Sigmund, a junior majoring in physics. Both are working on the high-resolution gravity map research project, which started as an informal partnership between UMSL and NGA but is now part of the CRADA.

Dawn King, an UMSL physics PhD alumna and geodetic earth scientist with NGA, spearheaded the initiative after Professor Sonya Bahar approached her about mentoring students. King’s work at NGA is essential to vital modern technologies such as remote sensing, GIS and GPS.

“A big part of what we do is maintain the infrastructure to make geospatial technology such as GPS even possible,” King explains. “A large part of the agency work is geoscience. Knowing the Earth and its processes is not only important for maintaining GPS, but also helps us understand and prepare for the effects of climate change.”

She notes that the agency’s gravitational model precisely represents the gravity field at the planet’s surface, which is used to calculate mean sea level. That, in turn, is utilized for accurate GPS readings and all forms of navigation. However, there are regions of the globe where obtaining precise gravity measurements is difficult due to harsh terrain or geopolitical complications. When there are gaps in the data, the agency uses estimations based on the Earth’s crustal density or terrain.

“Our goal is to replace the current estimation method and develop AI to predict gravity at these locations,” King says.

Mollett and Sigmund are a small part of a larger team of scientists at NGA, but they’ve been able to meaningfully contribute to the work. As part of the mapping team, Sigmund has cleaned data and learned to code. She’s also trained the artificial intelligence tool by having it make predictions for areas where the agency already has accurate data.

Since becoming a full-time member of the NGA team this year, Mollett has worked to develop a new convolution neural network – an artificial neural network commonly used to analyze visual imagery – feature extractor for the AI tool. Currently, the process relies on a CNN database culled from Google, but she is testing the results of extracting different features from the agency’s physical datasets in order to train the model to better reflect the characteristics of the project.

“If you learn anything in physics, it’s how to problem-solve,” Mollett says. “That is guaranteed, and I think that’s the number-one asset for a project like this.”

This is Sigmund’s second year working on the project, and she’s incredibly proud of the impact she’s made with NGA thus far.

“One thing that gravity anomalies affect is the water map – showing how much water is going to be going to a certain place,” she says. “That’s really important, especially when we’re looking at rising sea levels. It’ll probably save people’s lives. I do really think about the environment a lot, and I am proud that our work will probably be able to be used in the future for it.”

Craig says the university is striving to ensure more students in the region have similar opportunities.

This summer, UMSL built more than a dozen interdisciplinary geospatial courses, as well as modules in existing courses, to add to the array

of electives for the future certificate program. The new classes encompass several areas of study, including business, education, sociology and social work. Berberich adds that, eventually, the university is aiming to bring an NGA professional to campus to serve as a professor of practice.

At the K-12 level, a proposal from the College of Education would create an intellectual center to connect area K-12 educators to geospatial research and technology, preparing them to integrate that knowledge into STEM lessons.

The Geospatial Advanced Technology Lab will be central to these efforts. The project is still taking shape, but UMSL officials envision a space with state-of-the-art computers with exceptional processing power and an extended virtual reality hub. The latter will not only facilitate cutting-edge research, but also partnerships with regional and national businesses.

“We think that’s a space where researchers, faculty and students from this campus can go and learn and try new ideas – produce new knowledge right there,” Craig says.

Geospatial technology and research have undeniably shaped the modern world, and with these recent investments, UMSL will have a hand in shaping the future of the St. Louis region and beyond. Mollett, for one, has certainly felt the gravity of her work at NGA.

“It’s one thing to do research that you’re interested in, but it’s another to know that you genuinely impact people,” she says. “Everybody uses this. It’s cool to know that you actually have an effect on people and the way the world works.” 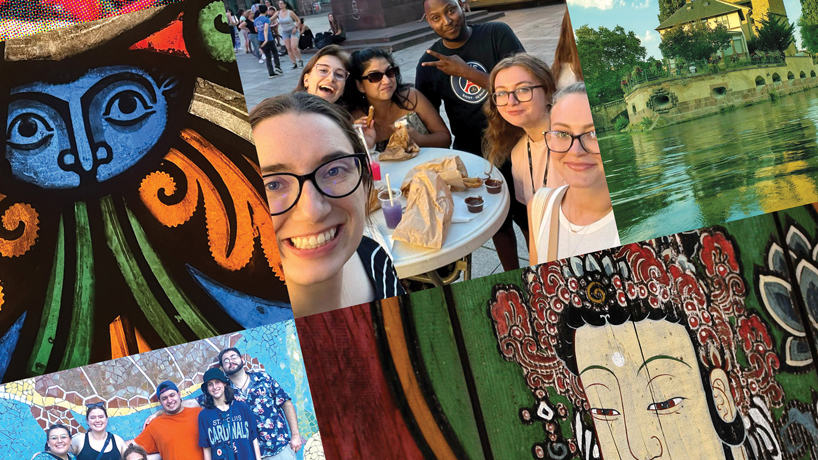