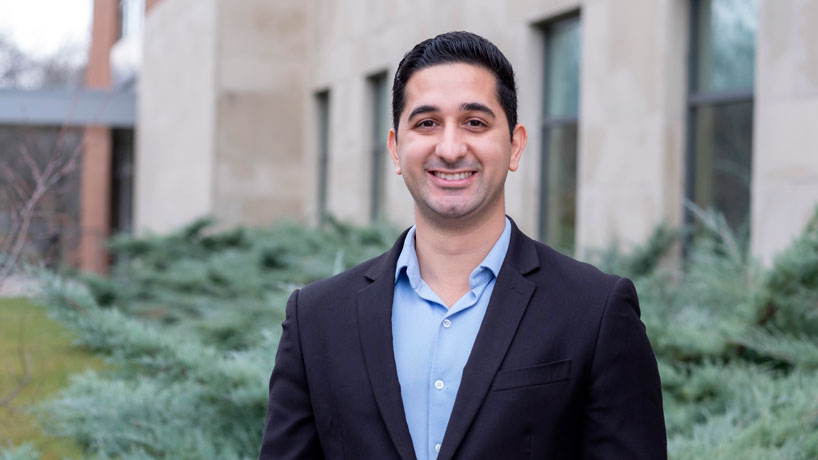 Aurion Farhadi made incredible strides in turning his academic career around and graduated with a master’s degree in accounting. He’s secured a position at KPMG, one of the country’s largest accounting firms. (Photo by August Jennewein)

Aurion Farhadi, by his own admission, had never been a great student.

He skated by in high school, doing the bare minimum. He had low accountability and little encouragement, and he was much more interested in sports – soccer and track –  than academics.

He wasn’t much more motivated in college and wound up dropping his initial major in chemical engineering because he was in danger of failing, though he still managed to graduate on time with a degree in chemistry.

When Farhadi reflects on that history, he’s even prouder about the position he finds himself in now, graduating from the University of Missouri–St. Louis with a master’s degree in accounting and is set to begin a new position as an audit associate at KPMG, one of the nation’s four largest accounting firms. 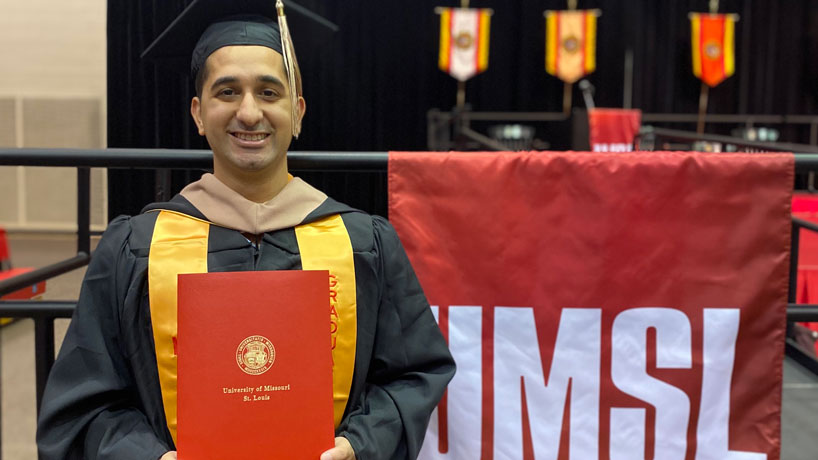 Aurion Farhadi took part in the commencement ceremony for the College of Business Administration on Saturday morning at the Mark Twain Athletic Center. (Photo courtesy of Aurion Farhadi)

“Who I am today is because of all those failures,” said Farhadi, who was chosen to be a student marshal during the Saturday’s commencement ceremony for the College of Business Administration. “Without them, I don’t know if I would have ended up here.”

Farhadi’s heart was never in chemical engineering when he started out as an undergraduate at the University of Missouri–Columbia. Over time, he realized he was miserable in the major. Though he’d always had good math skills, it didn’t resonate with his interests at all. By his junior year, he realized continuing in the major would lead to failure.

Farhadi didn’t want to start over with a new major – and couldn’t afford to – so he went to his advisor to see what his options were to still graduate on time. His advisor helped him figure out that he still could complete a degree in chemistry.

He still didn’t feel passionate about it, but it allowed him to get onto the next phase of his life, which included getting married and starting a career.

After graduation, Farhadi landed a position selling software and remained in that role for three years. During that time, a more senior salesman noticed his potential and thought he was capable of more. The man became a mentor, someone with whom Farhadi still keeps in touch.

“Having someone just say, ‘Hey, you’re a smart kid, you just need to hunker down and focus. You can do it,’” Farhadi said.

That support was transformational for Farhadi, allowing him to see more potential in himself.

Farhadi later learned he had an aptitude for accounting and might also enjoy it.

His wife was in graduate school and was struggling with an assignment in her accounting class. He offered to help and soon realized the work made sense to him.

“I just opened the middle of the accounting book, and somehow I figured out the answer,” he said. “I was like, ‘That was easy for me. Maybe I should look into accounting.’ So then I started bringing up the conversation with people, like my mother-in-law, who was an accountant, and the few other people around me who were accountants, and just had more conversations and started doing more research. I found out that I would be really good at this.”

Eventually, Farhadi made the decision to pursue a master’s degree in accounting, and he chose the program at UMSL.

The challenge was that his grades as an undergraduate weren’t high enough for him to be accepted into graduate school. Rather than accepting defeat, he enrolled in undergraduate accounting courses to try to prove himself to the faculty and advisors.

Farhadi got all A’s in the fall and summer semesters and was allowed to enroll in graduate school. He continued to apply himself with good success. He even took two challenging accounting courses – typically taken in separate semesters – simultaneously.

Along with his academic work, Farhadi also engaged with the department and became president of the student accounting club.

“When I decided to go back to school, I sat down and wrote everything I did wrong in undergraduate and in high school and everything I wanted to do better,” Farhadi said. “One of the things I wrote down was I wanted to be involved as much as possible, and accounting club was all-inclusive. There was no GPA requirement. All you had to do was join. That’s why I liked it. I just kept going to the meetings, and eventually my peers voted for me to be the accounting club president. Dr. Countryman and the UMSL accounting club opened doors for me to the accounting world that I wouldn’t have had otherwise.”

Farhadi made a big impression on Professor Steve Moehrle, who chairs the Department of Accounting.

“From Day One, he embraced every aspect of the master’s program,” Moehrle said. “He worked hard on the material, he participated in class, he forged friendships with fellow students and faculty members, and he became active in the accounting student organizations.  He is truly a model for how to prepare for success in a great profession.”

His journey serves as an affirmation that virtually anyone can change course and achieve their goals with ardent effort.

“If you work hard, and you show interest in something in this country – I don’t care what color you are, or what your background is, someone will notice,” he said. “Someone will help you get there. Who knows when that person will find you? But just show that you’re hardworking. That’s my experience in life.”

As he prepares to embark on his new career at KPMG, he is confident in his ability to succeed.

“I feel prepared,” he said. “UMSL has prepared me for the next steps in life.”