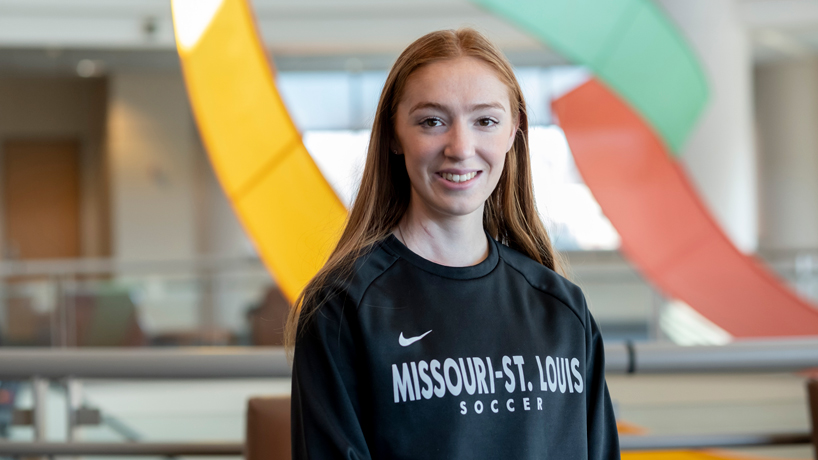 Imogen Bennett tried to take full advantage of her final few weeks as an undergraduate student at the University of Missouri–St. Louis.

For the first time in more than four years, the demands of being a student-athlete were behind her after the women’s soccer team’s season came to an end Nov. 4 in the semifinals of the Great Lakes Valley Conference Tournament.

Bennett, likewise, avoided the anxiety of having to hit the job market after landing an offer for a full-time position with Decipher Investigative Intelligence, a St. Louis-based company started in 2016 that assists large and midsize law firms in intelligence gathering and due diligence in the hiring process. She had been working as an intern there since July.

It all culminated with her walk across the stage on Saturday afternoon during the commencement ceremony for graduates of the College of Arts and Sciences at the Mark Twain Athletic Center.

“Having been an athlete and being so busy, it’s nice to be able to just take a break and enjoy the last month or so of being a college student,” said Bennett, who will be spending Christmas in St. Louis for the first time and will begin her new job in January. “I’m just proud that I made it. I’ve done it. It’s been an enjoyable experience, and walking across that stage for commencement is definitely going to be a moment I look back on for the rest of my life.”

Her time in college has not been without its challenges as she’s dealt with health issues that impacted the trajectory of her athletic career. 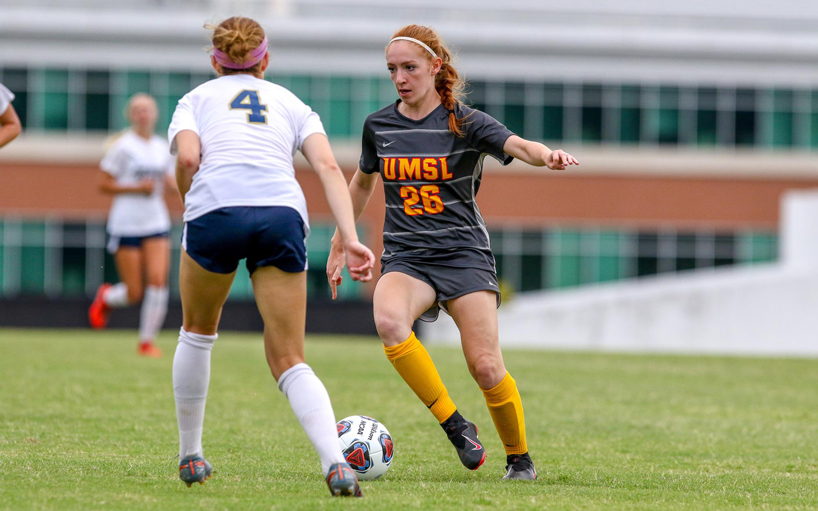 Bennett grew up in a soccer-obsessed family in Essex. Her father and her two brothers had all played competitively, and they had season tickets to West Ham United Football Club matches.

She began playing the game herself when she was 7 and competed on boy’s teams for several years before she started playing with other girls.

Bennett was passionate about the game and had a talent for it. By the time she reached sixth form – the final two years of secondary school in the United Kingdom – she realized she might have an opportunity to continue playing in college in the United States, and she enrolled at Barking Abbey looking to improve her chances.

Her plan worked. Bennett, who had visited the United States several times to play in youth tournaments, received attention and scholarship offers from multiple U.S. college coaches. Among them were then-UMSL Coach Wendy Dillinger and her assistant Lynda Keeton, a native of England.

“Everything just seemed to fit right,” Bennett said. “At the time, I was planning to be a business major, and the business school here is really good. The coach at the time, I enjoyed my conversations with her, and we had an English assistant coach as well at the time. We really connected, and it just felt like a good fit.”

It took a little time for Bennett to adapt to the American style of play, which she said placed a higher emphasis on athleticism and featured far more dribbling than she was used to growing up. But she still became a regular starter in the midfield throughout her freshman season.

Unfortunately, she wasn’t able to build on that early experience as she might have hoped.

“I had a backwards career,” she said. “I was a freshman starter, playing a lot of minutes. Sophomore year, I was in and out of starting lineup and then the last three years, I just had to play a role on the team in a different way.”

Bennett tore a quadriceps muscle three games into her junior season – which had been delayed until the spring semester of 2021 because of COVID-19. She then dealt with additional persistent health issues that slowed her in her final two seasons.

She impressed those around her in the Department of Athletics with her perseverance to continue playing and received the Inspiration Award at the department’s annual Louie Awards banquet last spring.

Coach Maddi Moon, who replaced Dillinger after the 2019 season, said Bennett also found ways to contribute, particularly this fall as she appeared in 16 games.

“With her IQ, because she was so smart and understood the game so well, she gave us such valuable minutes,” Moon said. “She really could pop into the right places and knew where to check in. If our midfield was getting destroyed, she knew how to fix it and what to solve, when from a coaching standpoint, I’m not able to because I’m not on the field.”

Along with classmates Maya Ware and Mia Milazzo, she helped lead a revival in the program, which won only three games during their freshman season but qualified for the conference tournament each of the past two seasons, both times upsetting the No. 1 seed in the quarterfinals.

“I’ll always be proud of how I contributed to this program,” she said. “It’s really fun to be a part of that. I know the program’s going to go on and be very successful, and I feel like my class has helped build that foundation.”

Bennett’s time at UMSL wasn’t solely defined by soccer. She tried to immerse herself in the wider campus, as well, and spent one summer as orientation leader.

She abandoned her original plans to major in business, drawn instead toward economics after taking an introductory class with Senior Lecturer Brian Speicher.

“It was kind of everything I’d been enjoying with business,” she said. “I think it pushes you to really think, and there’s a lot of problem-solving involved. I think it challenges your mind in a way that forces you to analyze things, and I just think it was a step above what I was doing before. I’ve gained a lot of good skills for going into work after this from it, which helps as well. You’ll have some classes where you’ll spend the whole semester in Excel, doing work with data and producing models and graphs from that. And then in other classes, you won’t touch numbers. It will all be theoretical. So there’s definitely different sides to it. Within that, you’ve obviously got so many different topics.”

Bennett liked the faculty members in the department and the community she found in the Sharon G. Levin Economics Resource Center, where she worked as a tutor.

“I think it’s been one of the reasons I’ve been able to be so successful because you’re close with all your professors, you’re close with your peers,” Bennett said. “You never feel afraid to ask for help, and I think that’s such a big thing in being successful in college is knowing when you need to ask for help. Help isn’t always, ‘Oh, my gosh, I’m failing.’ Help is just sometimes I’m stuck on this one question. But it boosts your grade because you get help with that question. Even with small things, I’m able to just go in that room and there’s probably going to be someone in there that can help me.”

Bennett said she learned about the internship at Decipher in the ERC while talking to her friend and fellow December graduate Senita Chambly. She applied and landed the position, and the company even allowed her to delay her start date so she could spend the early part of last summer playing soccer in Vermont.

She’s put in her time working as an intelligence analysis intern, researching prospective job candidates and trying to identify potential red flags so that clients are informed when they making hiring decisions.

Decipher also puts a heavy emphasis on data, and she’s gotten hands-on experience in that area as well. She was eager to accept the opportunity to continue working for the company full-time.

Bennett expects one day she’ll go back to school to pursue her master’s degree, but she feels like she’s gotten the most out of her undergraduate experience.

“It’s been rewarding,” she said. “I feel like I’ve grown a lot as a person. When I look back at myself at 18 years old, moving across the world to a city I’d never been to before, and the changes I’ve made, the way I’ve grown as a leader, the way my interpersonal skills have grown – I’m definitely smarter, which is a good thing. There are so many memories that I’ve made with being an athlete, within UMSL in general and then just in the city. There’s a lot to be grateful for, and definitely looking forward to the future and starting my career. I’m happy to be doing that at a company where I enjoy going to work, so it’s going to be a lot of fun.”