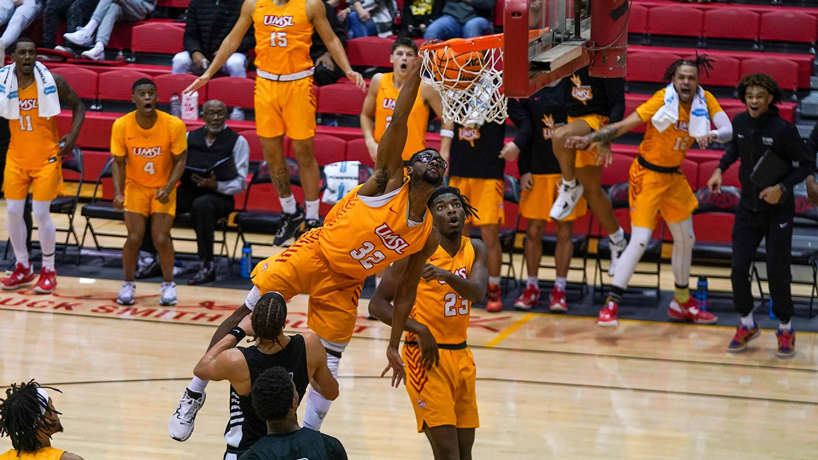 Victor Nwagbaraocha extends his right arm to finish a dunk over Wisconsin-Parkside’s Jacksun Hamilton in the second half of UMSL’s 83-61 victory over Wisconsin-Parkside on Saturday afternoon. The dunk sent the Tritons’ bench into a frenzy was included in SportsCenter’s Top Ten Plays on ESPN. (Photo by Patrick Clark/Athlete’s Eye Photography)

Men’s Basketball
The University of Missouri–St. Louis men’s basketball team has continued its early-season surge, running its record to 12-0, climbing in the national rankings and even garnering some national attention with graduate student guard Victor Nwagbaraocha‘s dunk over Wisconsin-Parkside’s Jacksun Hamilton in UMSL’s s 83-61 victory at the Mark Twain Athletic Center. The slam landed on SportsCenter’s Top Ten Plays on ESPN on Sunday.

The Tritons opened Saturday’s game on a 15-3 run with Nwagbaraocha scoring the first six points. They later used a 16-6 charge – including Nwagbaraocha’s dunk on the break – in the second half to put the game out of reach. He finished with 15 points. Forward Dylan West had a team-high 16 in only 14 minutes to lead five UMSL players in double figures. Coach Bob Sundvold‘s team held Parkside to 35.8% shooting, including 19.2% in the first half.

The Tritons also beat Rollins 91-66 on Dec. 19 in the D2 Holiday Hoops Classic at South Point Arena in Las Vegas. Bowen Sandquist scored a game-high 27 points including seven 3-pointers in the victory. UMSL (12-0) is one victory shy of equaling the mark for the longest winning streak in school history at 13 which was set by the 1971-72 team and equaled by the 2019-20 squad. The Tritons will visit Rockhurst on Thursday before playing host to Maryville on Saturday.

Women’s Basketball
UMSL overcame a six-point deficit in the fourth quarter on Dec. 19 and edged Purdue Northwest 62-59 to snap a three-game losing streak in a game played on John Friend Court in Hammond, Indiana. Sophomore guard Jalysa Stokes scored a team-high 16 points in the victory, and freshman guard Morgan Ramthun added 12 as the Tritons picked up their second road win of the season. UMSL couldn’t build on it, however, as it lost at home to Wisconsin-Parkside 91-65 last Saturday. Stokes scored 17, and Ramthun had 13, but the Tritons allowed the Rangers to shoot 67.3% from the field. UMSL (3-7) will visit Rockhurst on Thursday before returning home to play Maryville on Saturday.