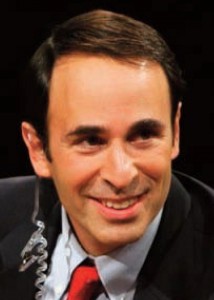 Political scientist Ken Goldstein, a consultant for the political unit at ABC News, will discuss “Lessons Learned from Campaign 2008 and Looking Forward to Campaign 2010” at 7:30 p.m. March 9 in the Summit Lounge at the J.C. Penney Conference Center at the University of Missouri–St. Louis. The free lecture is part of UMSL’s Political Science Alumni Speaker Series. A reception will precede the lecture and begin at 7 p.m.

Goldstein, a professor of political science at the University of Wisconsin-Madison, wrote the books “Interest Groups, Lobbying and Participation in America” and “Campaign Advertising and American Democracy.” He has written about political communication, voter turnout, campaign finance, survey methodology, Israeli politics, presidential elections and news coverage of health issues. Goldstein currently is at work on a book about how advertising is deployed in American presidential elections, as well as a project on voting patterns in Israel, the impact of television news and health communication.

In addition to his scholarly and current consultant work, Goldstein has worked as an election night consultant for CNN and CBS News.

The J.C. Penney Conference Center is on UMSL’s North Campus, One University Blvd. in St. Louis, Mo. 63121. The lecture is sponsored by the Department of Political Science at UMSL and the UMSL Alumni Association. E-mail umslpolisci@umsl.edu or call 314-516-5521 for more information or to make reservations.