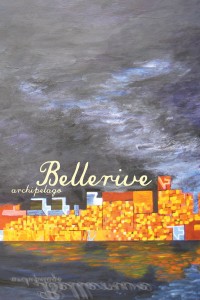 “Bellerive” has grown from humble beginnings. When it launched 10 years ago, the annual creative publication produced by the Pierre Laclede Honors College at the University of Missouri-St. Louis was overseen by a four-person staff that received only about 40 submissions.

For the 2009 edition, titled “Archipelago,” an entire class, under the guidance of UMSL honors faculty advisers Nancy Gleason and Gerianne Friedline, fielded about 360 writing and art submissions from the UMSL community. The “Bellerive” staff culled the blind submissions down to 48 pieces published in “Archipelago,” which was released Friday at a celebration featuring special guest Richard Cook, chair of the Department of English at UMSL and Guggenheim Fellowship Award recipient.

“‘Bellerive’ does double duty for our honors program and for the university,” said Robert Bliss, dean of the Pierre Laclede Honors College at UMSL. “It is a high-value experience­ — at once a fine student publication in both content and presentation, and a hugely successful annual seminar, which offers opportunities for students to contribute as critics, editors, designers and, I have to say it, cultural entrepreneurs.”

Gleason, director of writing and associate dean of the Pierre Laclede Honors College at UMSL, has been a “Bellerive” faculty adviser for each of the publication’s 10 years. The concept of “Bellerive” took root in her first few weeks working in the college. Gleason noted that she was surrounded by artistic students.

“They would bring copies of their poems by my office to ask what I thought. Several students asked about informal writing groups. Many also seemed interested in photography and art,” she recalled. “It seemed like an ideal match for the college — undergraduates putting together a creative writing journal. The three co-founding students who met with me agreed we should open it to the entire campus for submissions, so that’s what we did.”

Those three original UMSL students included Matthew Dunn, David Barbero and Sam Snyder. Along with Gleason, the trio drafted a mission statement that future “Bellerive” staffers have closely adhered to over the decade.

“Bellerive” accepts submissions of original poetry, fiction, essays, photography and art from UMSL students, faculty and staff. Students from an honors class, also titled “Bellerive,” are responsible for choosing content to fill the publication, in addition to editing, layout and design. The popular class began with the fourth issue and has filled to capacity ever since.

The latest edition of “Bellerive” is 102 pages. It’s available in paperback for $7 at UMSL’s Pierre Laclede Honors College, which also is celebrating its 20th anniversary this year, and University Bookstore & Triton Tech computer center.