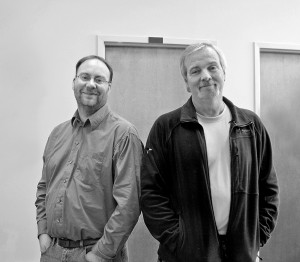 UMSL criminologists Terrance J. Taylor (left) and Finn-Aage Esbensen were honored for their research on gang violence and victimology.

Finn-Aage Esbensen, the E. Desmond Lee Endowed Professor of Youth Crime and Violence; Terrance J. Taylor, assistant professor of criminology and criminal justice; and UMSL alumnus Chris Melde, assistant professor in the School of Criminal Justice at Michigan State University in East Lansing, were honored for their paper, “‘I Got Your Back’: An Examination of the Protective Function of Gang Membership in Adolescence.” The paper was published in 2009 in the journal Criminology.

Esbensen, who currently serves as chairman of the Department of Criminology and Criminal Justice at UMSL, said the award was an honor.

“It’s always flattering to have your work recognized by your peers,” said Esbensen, who previously received the award in 1994.

The current award-winning paper was a culmination of several years of research by all three scholars studying gang victimization.

“Young people join gangs to escape violence and add a layer of protection,” Taylor said. “However, research shows that the potential for victimization actually increases once they become a gang member.”

The risk of victimization increases due to violence both within and outside of the gang.

“Not only actual violence they experience, but the perception or belief that they will be or could be victimized at any time,” he said. “This is reinforced through mythic violence – retelling of stories of prior violence encounters – which serves to increase members’ concern that the threat is constantly there.”

Esbensen is an expert on youth violence and gangs, evaluation research and cross-cultural research. He has published extensively on those topics and annually holds a daylong conference on youth violence prevention. He earned his bachelor’s and master’s degrees from Tufts University in Medford, Mass., and his doctorate from the University of Colorado in Boulder.

Taylor is an expert on prevention of juvenile victimization and offending and police and citizen relations. He has published several articles on youth violence and gang relations. He earned his bachelor’s, master’s and doctoral degrees from the University of Nebraska.

Melde is an expert on youth violence, perceptions of crime research methods and gangs criminological theory. He earned a bachelor’s degree from Loras College in Dubuque, Iowa, and his master’s degree and doctorate from UMSL.

The Academy of Criminal Justice Sciences is an international association established in 1963 to foster professional and scholarly activities in the field of criminal justice.