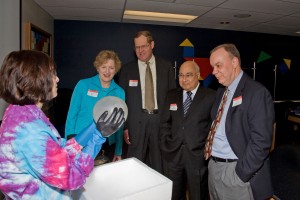 Lisa Carrico (far left), coordinator of the life science gallery at the Saint Louis Science Center, demonstrates how a balloon submerged in liquid nitrogen deflates. Watching the demonstration are (from left to right): Sen. Joan Bray; Kirk Richter and Jai Nagarkatti, from Sigma-Aldrich; and Robert Samuelson, from Boeing.

The University of Missouri–St. Louis College of Education held the grand opening of the new $900,000 Math Science Education Central on March 12. In addition to speeches and tours, visitors took part in several science demonstrations including fun with liquid nitrogen. Lisa Carrico, coordinator of the life science gallery at the Saint Louis Science Center, demonstrated how a balloon submerged into liquid nitrogen would deflate. However, once the balloon was returned to room temperature, it took on its full, inflated shape again.

“These demonstrations, the visual experiments, can engage and grab the interest of children,” Carrico said. “These are just a few ways to make science fun and interesting for them.”

Getting students engaged in science and math is the purpose of the new central, said Charles Schmitz, dean of the College of Education.

“It’s about preparing teachers to enter the classroom, to connect with students and get them excited and interested about science and math,” he said.

As of a few years ago, Schmitz said the central was only a dream of his and other members of the college.

“They called us dreamers. But with the support of (UMSL) Chancellor Tom George and wonderful community donors and partners, we made that dream come true,” he said.

The new facility, located in Marillac Hall on UMSL’s South Campus, is an extension of the college’s E. Desmond Lee Technology and Learning Center – the technological hub of the college since April 2000.

The central also is the new home to the Jean Craighead George Children’s Science Collection. Wendy Saul, the Dr. Allen B. And Helen S. Shopmaker Endowed Professor for Education in Collaboration with Springboard to Learning at UMSL, created the grant funded collection of amazing children’s book.

“I am tremendously happy to see the collection on display, to have a home and be available as a resource for educators,” Saul said.

The collaborative partner in the MSEC project is the Saint Louis Science Center.  Funding for the project was a collaborative effort, with major gifts from Boeing, Sigma Aldrich, Monsanto and MasterCard. UMSL Chancellor Tom George and the College of Education also made contributions to the central.