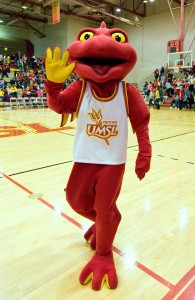 UMSL's new mascot waves to the crowd at its unveiling Jan. 21 at "Pack the Stands."

The new University of Missouri–St. Louis Tritons mascot burst onto the campus scene before a large “Pack the Stands” crowd this January at the Mark Twain Athletic & Fitness Center. While the red creature made its presence felt, showing off its excellent dance skills, something ultimately was lacking: a name. Here’s your chance to help rectify that problem.

Those names will be pared down to a final five that will be voted on April 7 through 14. Check back then at http://umsltritons.com to vote for your favorite of the five.

The mascot’s new name will be announced at Mirthday on April 21.