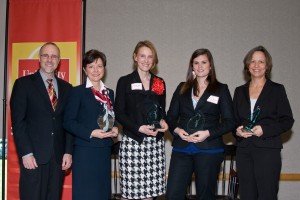 Deborah Baldini wears a lot of hats and most of them say “UMSL.”  For her distinguished career as a noted scholar, administrator, national leader in her field, and as an innovative champion for adults and adolescents with intellectual disabilities, she was honored Thursday at the 15th Annual Women Trailblazers Awards ceremony at the University of Missouri–St. Louis. Baldini was one of four women honored.

The event is held each year during Women’s History Month. It recognizes UMSL women who have “blazed a trail” for other women by being the first to occupy positions traditionally held by men, or were trailblazers in their fields, or who have made noteworthy contributions to the university and their profession.

Blanche M. Touhill, former UMSL chancellor and a historian, delivered the keynote address, echoing this year’s National Women’s History Month theme: “Writing Women Back into History.” She chronicled famous women throughout history who made a difference in their own lives and for the women who would follow them. And she urged those in attendance to record their own accomplishments, their own histories for future generations.

The Women Trailblazers ceremony is sponsored by the Office of Equal Opportunity and Diversity. This year’s honorees are:

Deborah Baldini –associate dean for the College of Arts and Sciences and the interim associate dean for the college of Fine Arts and Communication for Continuing Education. She has taught Spanish at UMSL since 1980, published software for college level Spanish, and has served as a reviewer of college level Spanish textbooks and multimedia projects.

Baldini also directs the UMSL Next Chapter Book Club for adults and adolescents with intellectual disabilities. Several years ago she developed a plan to nationalize the club making St. Louis the first out-of-state NCBC affiliate. In addition, she secured funding for a NCBC Lending Library, which contains more than 500 books and is located at UMSL.

Lauren Masterson-Rodriguez, a UMSL junior, has taken on numerous leadership roles at the university including coordinating HISLA, the Hispanic and Latino organization on campus. She has created a mentoring program for Hispanic high school students, encouraging higher education by helping them with the application process.

Masterson-Rodriguez is heading up the Census Project 2010 community service effort on campus. And she is the only woman to hold a leadership role in the UMSL College Republicans. She is interested in health policy and law, and plans to attend law school.

Dayna Stock has managed the Sue Shear Institute for Women in Public Life since 1998. She oversees all of the institute’s publications and programs including the 21st Century Leadership Academy. Each year 36 college women attend an intensive week-long residential workshop designed to inspire civic engagement and encourage women’s leadership in the public sector. Recent academy graduates have landed jobs in the White House Press Corps, at the United Nations, for numerous elected officials and as journalists, lobbyists and policy advocates.

While working full-time at UMSL, Stock has earned a master’s degree and is finishing up a doctorate in political science. She serves as a member of the Missouri State Board of Optometry and on the board of the United Way of Greater St. Louis.

Therese R. Trelz is a partner in the law firm of Armstrong Teasdale LLP. She is the first woman to serve on the firm’s management committee, and in 1998 founded the Professional Advancement of Women Program at the firm. In 2009 she received the Women’s Justice Award from the St. Louis Daily Record. She serves on numerous boards including St. John’s Mercy Medical Center and is a past president of the Family Support Network. She serves as chairman of UMSL’s Women’s Initiative Leadership Council.