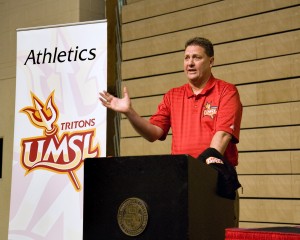 “We are delighted to name Steve as our new coach and welcome him and his family to St. Louis,” said Flanagan. “Steve is an excellent choice for UMSL from every perspective – in terms of the basketball component, his ability to serve as a mentor and his skills as a proven leader. He is the right coach to lead UMSL men’s basketball to the next level.”

Tappmeyer coached 21 seasons (1989-2009) at Northwest Missouri State with an overall record of 408-208 (.662). The all-time winningest coach in program history, he directed the Bearcats to 10 NCAA Tournament berths and three regular season and four conference tournament championships.

“My wife, Lynette, and I are both thrilled and excited about this opportunity to be the head men’s basketball coach at UMSL,” said Tappmeyer. “Originally, the St. Louis region was an attractive element since we have so many friends and family in the area, but we didn’t really know a lot about the university until a couple weeks ago.

“Since then we have been more than impressed with the people we have met and the things we have learned. I think it’s an exciting time to be at UMSL with all the great things planned for the future. The administration has a great vision for both the University and the athletic department and we are elated to be a part of that.”

Tappmeyer led the Bearcats to nine 20-win seasons in the last 12 years and to 10 20-win campaigns overall.

He came to Northwest after three seasons as head coach at East Central College, where he guided the community college program to a 62-32 record and was named the 1986 MCCAC Coach of the Year.

Prior to his stint at East Central, Tappmeyer served as an assistant at Northwest from 1981-85.

Tappmeyer played in the MIAA prior to entering the coaching field. The 1979 graduate of Southeast Missouri State averaged 16.3 points per game as a junior and was an honorable mention All-MIAA selection. He was also an honorable mention all-conference pick at East Central, where he played his freshman and sophomore seasons.

Tappmeyer is a Gerald, Mo., native. He and his wife, Lynette, have a daughter, Andrea.