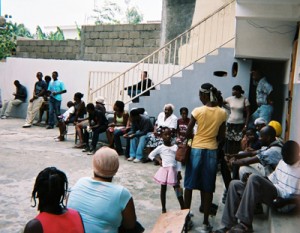 On a 90-degree day in Delmas, a suburb of Port-au-Prince, Haiti, Dawn Garzon treats babies and children at a nearby orphanage. The tiniest of the bunch are fortunate enough to have tents to block them from the sun and rain, but lie on a concrete floor, no fans to cool them. Broken buildings and piles of debris are everywhere. The scene is a new one for the nursing veteran.

“There are people there who don’t have food, they don’t have water. They are literally starving to death,” said Garzon, assistant professor of nursing at the University of Missouri–St. Louis, who went to Haiti March 12 to 21 with the Lutheran Church Missouri Synod Mercy Medical Team. The team administered much-needed medical care to people suffering after the catastrophic 7.0 earthquake that hit the country Jan. 12.

“For many people, we were it as far as medical attention. There was no other healthcare available,” she said.

The oppressive heat, relentless mosquitoes, lack of regular showers and sleeping on a concrete floor did not deter Garzon.

Growing up in Miami, she had many friends from Haiti and knew how fragile the country’s government and infrastructure were before the earthquake. 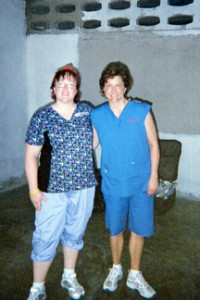 “I’ve always had a lot of love for Haitian people. Since the earthquake, their lives are dependent on the generosity of people from outside the country,” she said. “It was a no-brainer to help. I was fortunate to be able to go.”

A child and family health specialist, she helped make up the 24-person team that included physicians, physician assistants, nurses and a pharmacist. They tended to more than 1,300 people.

“There were an overwhelming number of skin infections, malaria, parasitic infections and respiratory problems,” Garzon said. “We handed out a lot of antibiotics, anti-parasitics, pain relievers and vitamins.”

Hundreds of thousands are still homeless in Haiti – some in tents while others carve out places to sleep among the rubble. Garzon reports that one third of the patients she saw – mostly women and children – did not have tents and much of the city still did not have electricity and clean water. However, the United Nations had numerous rice distribution stations nearby.

Garzon said her team was literally, in some cases, the only line of defense between a person and death.

“One boy had a severe asthma attack and luckily we had a nebulizer – the next hospital did not. We kept him overnight until he could breathe again,” said Garzon.  A nebulizer is a machine that allows a person to breathe in medicine through a mist.

Other people were so dehydrated they were given IVs to get their body chemistry back to normal.

“As a nurse, this was an incredibly rewarding experience. I could practice to the full extent of my knowledge and skills without worrying if the insurance company will cover it or not,” said the married mother of two. “That’s a cool thing because you go into nursing because you want to directly help people.”

Despite the bleak surroundings, Garzon found something special in the people of Haiti.

“I had to look for glimmers of hope and what I found were kids flying homemade kites or playing full soccer games with only a plastic bottle,” she said. “I realized that in the midst of all of it, the Haitians are joyous and friendly.”

Garzon said she is definitely heading back to Haiti. In the meantime, she is sharing her story with the UMSL community. She will hold a brown bag discussion about her experiences at 12 p.m.  April 28 in 17 Seton Hall. The talk is free. Contact d_garzon@umsl.edu for more information.